Can the Little Brown Baby Do Anything?

SHE is hardly more than a baby. Do you remember her little swinging bed in the tree, and her birds and flowers and butterflies?

What can such a baby do? I am sure she can't work.

Yes, she is a little creature, but she shall have a little chapter, too, of her own.

Sometimes when we are doing our little work quietly, and not supposing that anybody but those who are nearest us knows or cares or is helped by it, we find that really we have been doing a service for unknown friends far away whom we have never even seen; and this is what our brown baby is going to do.

She plays in the forest just as she used to; she gathers flowers and chases butterflies. But one morning, after she has been to the cow tree with her cocoanut bowl to get some milk for breakfast, and has had her bath in the stream, and her roll on the grass, she sees her mother walking slowly through the wood, looking carefully on this side and on that, to find the kina trees, with their yellow bark; and even this little girl, who is now but five years old, shows us that she can work as well as play, and begins to pull off the curled bark and bring the bits to her mother to see if they are of the right kind. And at last, down in the hot valley she finds a beautiful evergreen tree, with fragrant white blossoms something like the white lilac, and she runs to call her mother to see the pretty sight. But no sooner does the mother look at the beautiful tree than she hurries back to call the men, who come with their axes to cut it down, for it is a true kina tree and will yield many drums of bark.

And while the men are carefully stripping the great trunk and large boughs, the little girl works busily at the slender branches, and soon has her basket full of curly strips ready for drying.

Do you remember the time when Manenko had a fever, and the Bazungu gave her a white powder? and when Gemila, too, was ill, and the English lady brought her also the same bitter powder? Where do you suppose they got that medicine?

Probably they bought it at a druggist's in some city.

But where did the druggist get it?

Ah, we never thought of that! Where did he, indeed?

Why, that bitter powder is made from this very bark that the brown baby is so carefully pulling from the boughs, and her country is the only country in the world where it grows. Now, only think what a kind service she has done for her two sisters, Gemila and Manenko, whom she has never seen nor heard of.

She doesn't travel and take long journeys, as some of the other children do. She can only do her little work in her own home, and then send it away in ships far over the seas to distant countries. But when her drum of kina bark is taken to Arica for shipment there is another great package of something prettier than bark that goes with it, and you will see, by and by, to which of the seven sisters this will come.

There is a pretty little squirrel-like animal with the softest of gray fur. If the brown baby had any pets or any place in which to keep them I am sure she would want one of these little chinchillas, but no doubt it is happier in its free forest home than it would be in any little house, however fine, with which you or I could provide it. And as for the brown baby, who has no house for herself, she, of course has none for anything else. And yet the gentle creature living in its burrow and sitting at its little doorway in the sun is a great pleasure and entertainment to the child, whenever she climbs up the hillside far enough to come to chinchilla town, for it is almost as much of a little town as are the prairie dog towns of which you have sometimes heard. In fact, the prairie dog is a cousin of this same little gray chinchilla.

Our baby watches them with their tails curled up over their backs like squirrels, and sees them scamper into their underground houses when she comes too near; and she is sorry, and so am I, when her father catches as many of them as he can, that he may pack their pretty skins in great bundles, and send them away with the drums of bark to be sold.

Perhaps some of you will have chinchilla muffs and caps made from these same little skins, so they will be a present from brown-baby land.

Do you want to know how all these packages of bark and fur are carried down to the ships at the seashore?

They have neither horses nor carts, as in our country, for the mountain roads are too steep for such travel, but the packages are loaded on the backs of the gentle llamas, who can step lightly and safely down the steepest paths; and just as our men are ready to start with their loaded animals the mountain train from the silver mines comes into sight, winding slowly down the narrow path along the hillside.

Did you think I meant a train of cars? Oh, no! it was a train of llamas, with their small, graceful, erect heads, and their slender legs. How gallantly their leader moves in front, with his gayly embroidered halter, and pretty little streamer floating from his head! And the others all follow in single file down the slope, carrying their burdens so carefully that they scarcely seem to need the care of the drivers, who clamber along behind them. But, when one poor tired little animal suddenly lies down by the roadside, see how quickly his Indian master shows both love and care for him! He kneels beside him, pets and caresses him, and comforts him with tender words, just as Gemila and Alee pet their father's black horse; and at last the llama struggles again to his feet and follows his companions, who are almost out of sight. They are all loaded with silver from the mountain mines; and when they have left it at the seaport they will carry back salt for the mountain people.

The little fur and bark train joins the silver train, and all go together down to the ships that are waiting for their loads. And the little brown baby watches them out of sight, and then goes back to her play and her work, and does not dream that she has sent anything to Manenko or to Gemila, or to any other of those far-away, unknown sisters. 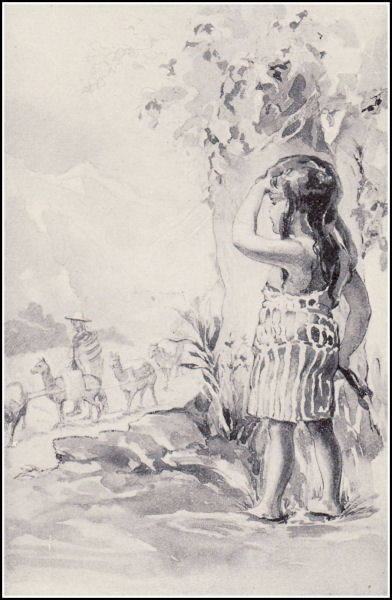