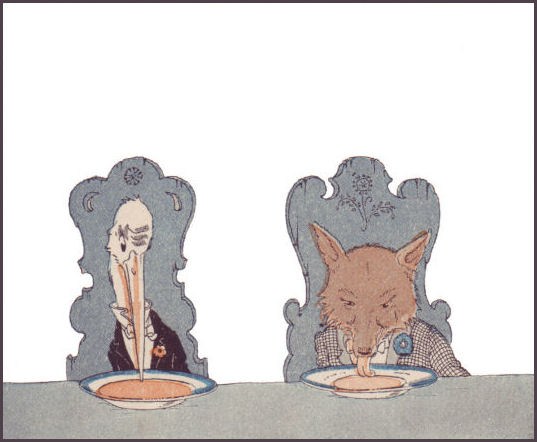 The Fox and the Stork

A fox once asked a stork to dinner. The stork came. The fox thought it would be fun to play a joke upon the stork. So he gave the stork for his dinner only some thin soup in a flat dish.

The fox could lap this up like a dog, but the poor stork could not get any soup into his long bill. He went away from the dinner as hungry as when he came. The fox laughed to himself to think what a good joke he had played on the stork.

A few days later the stork asked the fox to dinner. The fox came, and the dinner was brought in. What do you think the stork had done? He had only soup for dinner, and he had put it into a jar with a long neck. Into this jar the stork put his long bill, and ate his fill. The fox could only lick the outside of the jar. He went away as hungry as when he came. He did not laugh at the stork's joke.