The Winning of the Golden Fleece

HEY took the ship out of the backwater and they brought her to a wharf in the city. At a place that was called "The Ram's Couch" they fastened the Argo.  Then they marched to the field of Ares, where the king and the Colchian people were.

Jason, carrying his shield and spear, went before the king. From the king's hand he took the gleaming helmet that held the dragon's teeth. This he put into the hands of Theseus, who went with him. Then with the spear and shield in his hands, with his sword girt across his shoulders, and with his mantle stripped off, Jason looked across the field of Ares.

He saw the plow that he was to yoke to the bulls; he saw the yoke of bronze near it; he saw the tracks of the bulls' hooves. He followed the tracks until he came to the lair of the fire-breathing bulls. Out of that lair, which was underground, smoke and fire belched.

He set his feet firmly upon the ground and he held his shield before him. He awaited the onset of the bulls. They came clanging up with loud bellowing, breathing out fire. They lowered their heads, and with mighty, iron-tipped horns they came to gore and trample him.

The bulls roared mightily. Grasping the horns of the bull that was upon his right hand, Jason dragged him until he had brought him beside the yoke of bronze. Striking the brazen knees of the bull suddenly with his foot he forced him down. Then he smote the other bull as it rushed upon him, and it too he forced down upon its knees.

Castor and Polydeuces held the yoke to him. Jason bound it upon the necks of the bulls. He fastened the plow to the yoke. Then he took his shield and set it upon his back, and grasping the handles of the plow he started to make the furrow.

With his long spear he drove the bulls before him as with a goad. Terribly they raged, furiously they breathed out fire. Beside Jason Theseus went holding the helmet that held the dragon's teeth. The hard ground was torn up by the plow of adamant, and the clods groaned as they were cast up. Jason flung the teeth between the open sods, often turning his head in fear that the deadly crop of the Earth-born Men were rising behind him. 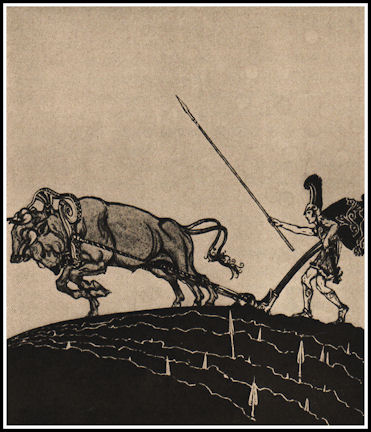 By the time that a third of the day was finished the field of Ares had been plowed and sown. As yet the furrows were free of the Earth-born Men. Jason went down to the river and filled his helmet full of water and drank deeply. And his knees that were stiffened with the plowing he bent until they were made supple again.

He saw the field rising into mounds. It seemed that there were graves all over the field of Ares. Then he saw spears and shields and helmets rising up out of the earth. Then armed warriors sprang up, a fierce battle cry upon their lips.

Jason remembered the counsel of Medea. He raised a boulder that four men could hardly raise and with arms hardened by the plowing he cast it. The Colchians shouted to see such a stone cast by the hands of one man. Right into the middle of the Earth-born Men the stone came. They leaped upon it like hounds, striking at one another as they came together. Shield crashed on shield, spear rang upon spear as they struck at each other. The Earth-born Men, as fast as they arose, went down before the weapons in the hands of their brethren.

Jason rushed upon them, his sword in his hand. He slew some that had risen out of the earth only as far as the shoulders; he slew others whose feet were still in the earth; he slew others who were ready to spring upon him. Soon all the Earth-born Men were slain, and the furrows ran with their dark blood as channels run with water in springtime.

The Argonauts shouted loudly for Jason's victory. King Æetes rose from his seat that was beside the river and he went back to the city. The Colchians followed him. Day faded, and Jason's contest was ended.


But it was not the will of Æetes that the strangers should be let depart peaceably with the Golden Fleece that Jason had won. In the assembly place, with his son Apsyrtus beside him, and with the furious Colchians all around him, the king stood: on his breast was the gleaming corselet that Ares had given him, and on his head was that golden helmet with its four plumes that made him look as if he were truly the son of Helios, the Sun. Lightnings flashed from his great eyes; he spoke fiercely to the Colchians, holding in his hand his bronze-topped spear.

He would have them attack the strangers and burn the Argo.  He would have the sons of Phrixus slain for bringing them to Aea. There was a prophecy, he declared, that would have him be watchful of the treachery of his own offspring: this prophecy was being fulfilled by the children of Chalciope; he feared, too, that his daughter, Medea, had aided the strangers. So the king spoke, and the Colchians, hating all strangers, shouted around him.

Word of what her father had said was brought to Medea. She knew that she would have to go to the Argonauts and bid them flee hastily from Aea. They would not go, she knew, without the Golden Fleece; then she, Medea, would have to show them how to gain the Fleece.

Then she could never again go back to her father's palace, she could never again sit in this chamber and talk to her hand-maidens, and be with Chalciope, her sister. Forever afterward she would be dependent on the kindness of strangers. Medea wept when she thought of all this. And then she cut off a tress of her hair and she left it in her chamber as a farewell from one who was going afar. Into the chamber where Chalciope was she whispered farewell.

The palace doors were all heavily bolted, but Medea did not have to pull back the bolts. As she chanted her Magic Song the bolts softly drew back, the doors softly opened. Swiftly she went along the ways that led to the river. She came to where fires were blazing and she knew that the Argonauts were there.

She called to them, and Phrontis, Chalciope's son, heard the cry and knew the voice. To Jason he spoke, and Jason quickly went to where Medea stood.

She clasped Jason's hand and she drew him with her. "The Golden Fleece," she said, "the time has come when you must pluck the Golden Fleece off the oak in the grove of Ares." When she said these words all Jason's being became taut like the string of a bow.

It was then the hour when huntsmen cast sleep from their eyes—huntsmen who never sleep away the end of the night, but who are ever ready to be up and away with their hounds before the beams of the sun efface the track and the scent of the quarry. Along a path that went from the river Medea drew Jason. They entered a grove. Then Jason saw something that was like a cloud filled with the light of the rising sun. It hung from a great oak tree. In awe he stood and looked upon it, knowing that at last he looked upon THE GOLDEN FLEECE.

His hand let slip Medea's hand and he went to seize the Fleece. As he did he heard a dreadful hiss. And then he saw the guardian of the Golden Fleece. Coiled all around the tree, with outstretched neck and keen and sleepless eyes, was a deadly serpent. Its hiss ran all through the grove and the birds that were wakening up squawked in terror.

Like rings of smoke that rise one above the other, the coils of the serpent went around the tree—coils covered by hard and gleaming scales. It uncoiled, stretched itself, and lifted its head to strike. Then Medea dropped on her knees before it, and began to chant her Magic Song.

As she sang, the coils around the tree grew slack. Like a dark, noiseless wave the serpent sank down on the ground. But still its jaws were open, and those dreadful jaws threatened Jason. Medea, with a newly cut spray of juniper dipped in a mystic brew, touched its deadly eyes. And still she chanted her Magic Song. The serpent's jaws closed; its eyes became deadened; far through the grove its length was stretched out.

Then Jason took the Golden Fleece. As he raised his hands to it, its brightness was such as to make a flame on his face. Medea called to him. He strove to gather it all up in his arms; Medea was beside him, and they went swiftly on.

They came to the river and down to the place where the Argo  was moored. The heroes who were aboard started up, astonished to see the Fleece that shone as with the lightning of Zeus. Over Medea Jason cast it, and he lifted her aboard the Argo.

"O friends," he cried, "the quest on which we dared the gulfs of the sea and the wrath of kings is accomplished, thanks to the help of this maiden. Now may we return to Greece; now have we the hope of looking upon our fathers and our friends once more. And in all honor will we bring this maiden with us, Medea, the daughter of King Æetes.

Then he drew his sword and cut the hawsers of the ship, calling upon the heroes to drive the Argo  on. There was a din and a strain and a splash of oars, and away from Aea the Argo  dashed. Beside the mast Medea stood; the Golden Fleece had fallen at her feet, and her head and face were covered by her silver veil.