T HERE was once a sweet little maiden, who was loved by all who knew her; but she was especially dear to her Grandmother, who did not know how to make enough of the child. Once she gave her a little red velvet cloak. It was so becoming, and she liked it so much, that she would never wear anything else; and so she got the name of Red Riding Hood.

One day her Mother said to her: "Come here, Red Riding Hood, take this cake and bottle of wine to Grandmother; she is weak and ill, and it will do her good. Go quickly, before it gets hot, and don't loiter by the way, or run, or you will fall down and break the bottle, and there will be no wine for Grandmother. When you get there, don't forget to say 'Good-morning' prettily, without staring about you."

"I will do just as you tell me," Red Riding Hood promised her Mother.

Her Grandmother lived away in the woods a good half-hour from the village. When she got to the wood, she met a Wolf; but Red Riding Hood did not know what a wicked animal he was, so she was not a bit afraid of him. 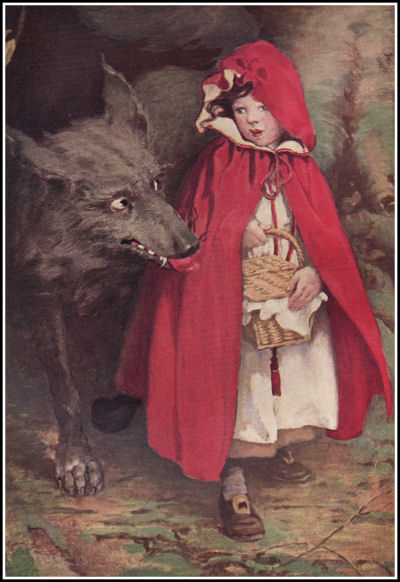 "Whither away so early, Red Riding Hood?"

"What have you got in your basket?"

"Cake and wine; we baked yesterday, so I'm taking a cake to Grannie; she wants something to make her well."

"Where does your Grandmother live, Red Riding Hood?"

"A good quarter of an hour further into the wood. Her house stands under three big oak trees, near a hedge of nut trees which you must know," said Red Riding Hood.

The Wolf thought: "This tender little creature will be a plump morsel; she will be nicer than the old woman. I must be cunning, and snap them both up."

He walked along with Red Riding Hood for a while, then he said: "Look at the pretty flowers, Red Riding Hood. Why don't you look about you? I don't believe you even hear the birds sing. You are just as solemn as if you were going to school: everything else is so gay out here in the woods."

Red Riding Hood raised her eyes, and when she saw the sunlight dancing through the trees, and all the bright flowers, she thought: "I'm sure Grannie would be pleased if I took her a bunch of fresh flowers. It is still quite early. I shall have plenty of time to pick them."

So she left the path, and wandered off among the trees to pick the flowers. Each time she picked one, she always saw another prettier one further on. So she went deeper and deeper into the forest.

In the meantime the Wolf went straight off to the Grandmother's cottage, and knocked at the door.

"Red Riding Hood, bringing you a cake and some wine. Open the door!"

The Wolf pressed the latch, and the door sprang open. He went straight in and up to the bed without saying a word, and ate up the poor old woman. Then he put on her nightdress and nightcap, got into bed and drew the curtains.

Red Riding Hood ran about picking flowers till she could carry no more, and then she remembered her Grandmother again. She was astonished when she got to the house to find the door open, and when she entered the room everything seemed so strange.

She felt quite frightened, but she did not know why. "Generally I like coming to see Grandmother so much," she thought. She cried: "Good-morning, Grandmother," but she received no answer.

Then she went up to the bed and drew the curtain back. There lay her Grandmother but she had drawn her cap down over her face, and she looked very odd.

"Oh, Grandmother, what big ears you have got," she said.

"The better to hear with, my dear."

"Grandmother, what big eyes you have got."

"The better to see with, my dear."

"What big hands you have got, Grandmother."

"The better to catch hold of you with, my dear."

"But Grandmother, what big teeth you have got."

"The better to eat you with, my dear."

Hardly had the Wolf said this, than he made a spring out of bed, and devoured poor little Red Riding Hood. When the Wolf had satisfied himself, he went back to bed and he was soon snoring loudly.

A Huntsman went past the house, and thought, "How loudly the old lady is snoring; I must see if there is anything the matter with her."

So he went into the house, and up to the bed, where he found the Wolf fast asleep. "Do I find you here, you old sinner?" he said. "Long enough have I sought you."

He raised his gun to shoot, when it just occurred to him that perhaps the Wolf had eaten up the old lady, and that she might still be saved. So he took a knife and began cutting open the sleeping Wolf. At the first cut he saw the little red cloak, and after a few more slashes, the little girl sprang out, and cried: "Oh, how frightened I was, it was so dark inside the Wolf!" Next the old Grandmother came out, alive, but hardly able to breathe.

Red Riding Hood brought some big stones with which they filled the Wolf, so that when he woke and tried to spring away, they dragged him back, and he fell down dead.

They were all quite happy now. The Huntsman skinned the Wolf, and took the skin home. The Grandmother ate the cake and drank the wine which Red Riding Hood had brought, and she soon felt quite strong. Red Riding Hood thought: "I will never again wander off into the forest as long as I live, if my Mother forbids it."