Washington in the French War

When Washington got back from the western side of the mountains, it became evident to the governor of Virginia that the French must be either driven away or the English people must be shut in to the country on the east of the Mountains. The people in the colonies did not like the notion of being fenced in like a lot of cattle in a pasture. So Washington was again sent to the West in 1754, to take possession of the country. On his first trip he had seen the point where the Allegheny [al-le-ga´-ny] and Monongahela [no-non´-ga-hee´-lah] rivers meet, which he thought would be a good place for a fort. A small company of men were sent ahead to build a fort at this place; but the French drove them away, and planted a fort of their own on the ground. This was called Fort Duquesne [du-kane´]. 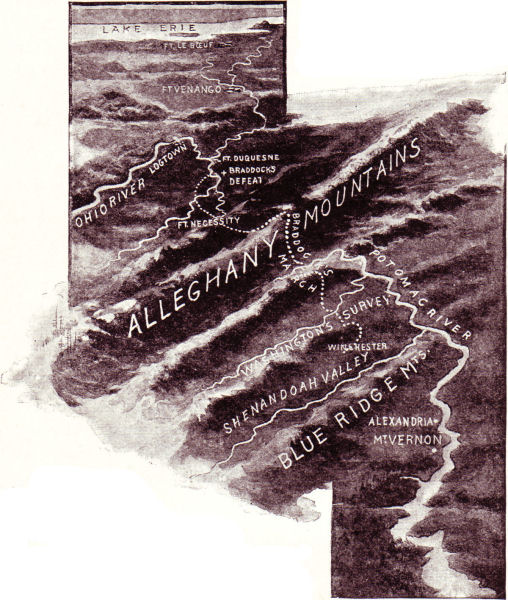 But Washington soon found that he must retreat or be taken. He fell back to a place called Great Meadows, where he built a sort of fort and called it Fort Necessity. Here the Half-king in despair left him, and the French attacked his little force. After the conflict had lasted one day, Washington, seeing himself outnumbered, agreed to march out of the fort and return to the settlements, which he did. This expedition of Washington's was the beginning of a great war between England and France.


The next year troops were sent from England under General Braddock, who set out to drive the French from Fort Duquesne. Braddock was a brave man, but one of the sort who can not learn anything. He laughed at the lank and careless-looking American troops, who cut a sorry figure alongside of the English with their bright red coats and fine drill. He was sure that these rough Americans were of no use. Even American officers were treated with contempt by the British authorities, and were not allowed to rank with English officers. Washington was so stung by this that he resigned his place, but he accepted a position on Braddock's staff.

Rough as the mountain roads were, Braddock traveled in a coach as far as he could, and tried to keep up the display common in Europe. He said that the Indians would not prove formidable when they came to fight his well-drilled English troops. Washington could not persuade the general to send scouts on either side of his line. One day there came to Braddock a company of woodsmen in hunting shirts. They were commanded by the famous Captain Jack, who was known as the "Black Hunter" of Pennsylvania. Captain Jack's whole family had been killed by the savages in his absence. He had then taken to the woods, and devoted himself to revenging the death of his family and to protecting the settlers. He and his followers lived in the forest, and kept the Indians in constant fear of them. This Captain Jack, and all his men, came to General Braddock and offered to help him as scouts. But Braddock put all his confidence in his solid ranks of English soldiers, and he foolishly refused the offer of the Black Hunter and his men.


As the army drew near to Fort Duquesne, Washington suggested to the commander that the Virginia rangers should be sent in front, because they were used to the woods. But Braddock was angry to think that a young American should advise an old British general.

On the 9th of July, 1755, as Braddock's army was marching along the narrow track through the woods, the Indians and French attacked them. All at once the woods rang with the wild war cry of the Indians, like the barking of a thousand wild animals. The forest, but a minute before so silent, was alive with screaming savages. From every tree and thicket the Indians leveled their rifles at the red coats of the English, who fell like pigeons under their fire. Unable to see anybody to shoot at, the English soldiers did not know what to do. The Americans took to the trees and stumps and returned the fire in Indian fashion, and Washington begged the general to order the British to do the same; but Braddock made them stand up in line, where they could easily be shot down.

Braddock fought bravely, and fell at length mortally wounded. Colonel Washington did his best to rally the men and save the battle. He had two horses shot under him, and four bullets went through his coat. The army, so gay and brave in the morning, was soon broken to pieces, and the men fled back to the settlements.

But Washington had become the hero of the people. He was now put in chief command of the Virginia troops in defense of the frontier, and managed affairs well. In 1758 he commanded the foremost division in an expedition under General Forbes, which slowly cut its way through the rough wilderness of Pennsylvania, and, having at last got over the mountains, forced the French to leave Fort Duquesne. The fort was rebuilt by the English and renamed Fort Pitt, in honor of William Pitt, the great prime minister of England, who was a true friend to the Americans. When a town grew around Fort Pitt it as called Pittsburg.

The war between the English and the French was finally closed in 1763. Canada, with all the country east of the Mississippi, was given up to the English, and settlers soon began to make their way into the region now known as Kentucky and Tennessee.

Before the war closed Washington retired to his home at Mount Vernon, and was married to Mrs. Martha Custis, a widow.