W HEN that man who had brought the news and made the false swearing was well out of the country, then Ondott bestirred himself to go against Hiarandi. Said he to Einar:

"It is time that we summon Hiarandi soon to answer to the blood-suit, for the sitting of the Althing draws nigh."

To that Einar assented, and on the morrow Ondott bade two men arm themselves and go with them to Cragness.

"Why need we men?" asked Einar.

"We must have witnesses to the summoning," answered Ondott.

"But it is not necessary to bear arms," said Einar.

"We will prepare ourselves," replied Ondott, "as becomes thy dignity and as regards thy safety, for Hiarandi hath a quick temper." Then Einar said no more, and they rode to Cragness. But Ondott knew well that at such summonings quarrels often arose; and he said privily to his men, Hallmund and Hallvard:

"Look that your swords be loose in their sheaths."

They rode into the yard at Cragness and called Hiarandi from his house. Hiarandi came, and with him Rolf, bearing his bow, for he was about to go out for birds.

"Hiarandi," said Einar, "we have come to speak of the blood-suit for the slaying of my kinsman."

"That thy kinsman is slain I knew," answered Hiarandi, "but I see not how it affects me in any way, so long as my brother be living."

"But thy brother is dead," replied Einar, and told that Kiartan was shipwrecked in the Orkneys.

"This is the first I have heard of it," said Hiarandi.

Then Ondott spoke. "Knowing thy suspicious nature," said he, "I brought with us the men who were witnesses to the oath the messenger made. Thus canst thou know thy brother is truly dead."

Hallvard and Hallmund said they had witnessed the oath. Hiarandi answered no word, but looked from one to the other.

"Now," said Ondott, "these same men will be witnesses to what we say here together." And this he said in a manner to provoke Hiarandi, yet he still answered nothing.

"Is it not better," asked Einar, "that this matter be settled here quietly, between neighbors, rather than be brought before the judges at the Althing?"

"Quietly settled is always best," answered Hiarandi. "Yet I see not how this matter is to be settled at all, seeing I have no money to make atonement."

"Now," said Ondott quickly to Einar, "let me speak for thee in this affair." Then Einar gave the matter into the hands of Ondott.

"All men know," began Ondott then, "that thou art poor, Hiarandi." And he saw Hiarandi flush with anger. Then he went on to propose that an exchange be made of Cragness for some parts of Einar's land, much less in value. And he spoke with such words that Hiarandi would feel insulted, and marked him grow ever redder in the face. When he had finished, Hiarandi burst out upon him.

"Foolish are ye to suppose," cried Hiarandi, "that I will ever give up this stead which my fathers have settled. Let this matter come to the courts of law."

Ondott spoke to Einar. "There is no reasoning with a madman. Thou must recite the summons."

Then Einar, who knew the law well, spoke the summons, and named the deed which was done on his kinsman, and made Hiarandi answerable; and called him to appear before the Quarter Court at the Althing, there to justify the slaying, or pay the blood-fine, or be made an outlaw. Everything he said in due legal form, and Ondott and the two men were named as witnesses.

Then he prepared to ride away, but Ondott spoke once more. "If thou canst not keep land, Hiarandi, better than thy father, then must thou lose this place in the end."

Hiarandi could not restrain his wrath. He spoke no word; but he strode to Ondott, and smote with his staff. Ondott warded the blow, but the arm was broken at the wrist.

Then Ondott cried to Hallvard and Hallmund: "Set upon him!" Those two drew their swords, and in that moment Hiarandi stood in danger of his life.

But Rolf had strung his bow and set an arrow on the string. He drew the shaft to its head, and aimed at Einar, and cried: "Now Einar dies if my father is hurt!"

They drew away hastily, and dared do no more, for they knew the aim of the lad. Nothing more was done in violence; yet before he rode away did Ondott summon Hiarandi for that hurt to him. And there the matter rested, with two suits against Hiarandi. Then all was quiet until the time came for folk to ride to the Althing. 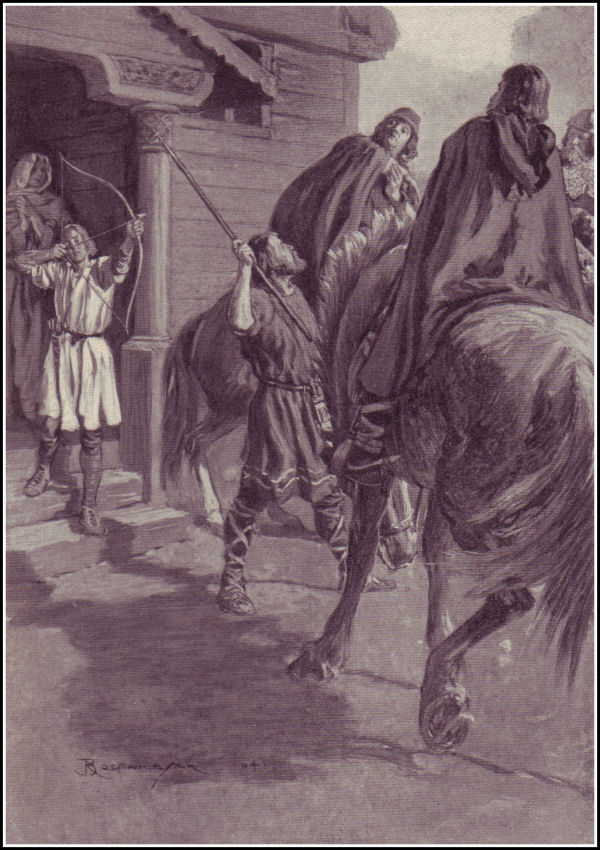