A Night Ride in a Prairie Schooner

One afternoon in the autumn of 1868 Duncan Stewart, leading his little fleet of "prairie schooners," entered upon "The Big Prairie" of northern Iowa, and pushed resolutely on into the west. His four-horse canvas-covered wagon was followed by two other lighter vehicles, one of which was driven by his wife, and the other by a hired freighter. At the rear of all the wagons, and urging forward a dozen or sixteen cattle, trotted a gaunt youth and a small boy.

The boy had tears upon his face, and was limping with a stone-bruise. He could hardly look over the wild oats, which tossed their gleaming bayonets in the wind, and when he dashed out into the blue joint and wild sunflowers, to bring the cattle into the road, he could be traced only by the ripple he made, like a trout in a pool. He was a small edition of his father. He wore the same color and check in his hickory shirt and his long pantaloons of blue denim, had suspenders precisely like those of the men. Indeed, he considered himself a man, notwithstanding the tear-stains on his brown cheeks.

It seemed a long time since leaving his native Wisconsin coolly behind, with only a momentary sadness, but now, after nearly a week of travel, it seemed his father must be leading them all to the edge of the world, and Lincoln was very sad and weary.

One by one the teams stopped, and the cattle began to feed (they were always ready to eat), and Mr. Stewart, coming back where his wife sat, said

"Well, Kate, here's the big prairie I told you of, and beyond that blue line of timber you see is Sun Prairie, and home."

Mrs. Stewart did not smile. She was too weary, and the wailing of little Mary in her arms was dispiriting.

"Come here, Lincoln," said Mr. Stewart. "Here we are, out of sight of the works of man. Not a house in sight—climb up here and see."

Lincoln rustled along through the tall grass, and, clambering up the wagon wheel, stood silently beside his mother. Tired as he was, the scene made an indelible impression on him. It was as though he had suddenly been transported into another world, a world where time did not exist; where snow never fell, and the grass waved forever under a cloudless sky. A great awe fell upon him as he looked, and he could not utter a word. 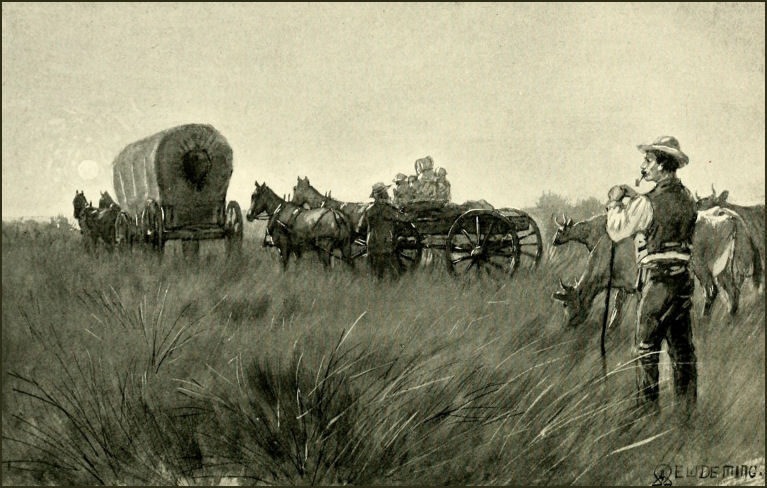 Again the little wagon train took up its slow way through the tall ranks of the wild oats, and the drooping, flaming sunflowers. Slowly the sun sank. The crickets began to cry, the night-hawks whizzed and boomed, and long before the prairie was crossed the night had come.

Being too tired to foot it any longer behind the cracking heels of the cows, Lincoln climbed into the wagon beside his little brother, who was already asleep, and, resting his head against his mother's knee, lay for a long time, listening to the chuck-chuckle  of the wheels, watching the light go out of the sky, and counting the stars as they appeared.

At last they entered the wood, which seemed a very threatening place indeed, and his alert ears caught every sound,—the hoot of owls, the quavering cry of coons, the twitter of night birds. But at last his weariness overcame him, and he dozed off, hearing the clank of the whippletrees, the creak of the horses' harness, the vibrant voice of his father, and the occasional cry of the hired hand, urging the cattle forward through the dark.

He was roused once by the ripple of a stream, wherein the horses thrust their hot nozzles, he heard the grind of wheels on the pebbly bottom, and the wild shouts of the resolute men as they scrambled up the opposite bank, and entered once more the dark aisles of the forest. Here the road was smoother, and to the soft rumble of the wheels the boy slept.

At last, deep in the night, so it seemed to Lincoln, his father shouted: "Wake up, everybody. We're almost home." Then, facing the darkness, he cried, in western fashion, "Hello! the house!"

Dazed and stupid, Lincoln stepped down the wheel to the ground, his legs numb with sleep. Owen followed, querulous as a sick puppy, and together they stood in the darkness, waiting further command.

From a small frame house, near by, a man with a lantern appeared.

"Hello!" he said, yawning with sleep. "Is that you, Stewart? I'd jest about give you up."

While the men unhitched the teams, Stewart helped his wife and children to the house, where Mrs. Hutchinson, a tall, thin woman, with a pleasant smile, made them welcome. She helped Mrs. Stewart remove her things, and then set out some bread and milk for the boys, which they ate in silence, their heavy eyelids drooping.

When Mr. Stewart came in, he said: "Now, Lincoln, you and Will are to sleep in the other shack. Run right along, before you go to sleep. Owen will stay here."

Without in the least knowing the why or wherefore, Lincoln set forth beside the hired man, out into the unknown. They walked rapidly for a long time, and, as his blood began to stir again, Lincoln awoke to the wonder and mystery of the hour. The strange grasses under his feet, the unknown stars over his head, the dim objects on the horizon, were all the fashioning of a mind in the world of dreams. His soul ached with the passion of his remembered visions and his forebodings.

At last they came to a small cabin on the banks of a deep ravine. Opening the door, the men lit a candle, and spread their burden of blankets on the floor. Lincoln crept between them like a sleepy puppy, and in a few minutes this unknown actual world merged itself in the mystery of dreams.

When he woke, the sun was shining, hot and red, through the open windows, and the men were smoking their pipes by the rough fence before the door. Lincoln hurried out to see what kind of a world this was to which his night's journey had hurried him. It was, for the most part, a level land, covered with short grass intermixed with tall weeds, and with many purple and yellow flowers. A little way off, to the right, stood a small house, and about as far to the right was another, before which stood the wagons belonging to his father. Directly in front was a wide expanse of rolling prairie, cut by a deep ravine, while to the north, beyond the small farm which was fenced, a still wider region rolled away into unexplored and marvellous distance. Altogether it was a land to exalt a boy who had lived all his life in a thickly settled Wisconsin coolly, where the horizon line was high and small of circuit.

In less than two hours the wagons were unloaded, the stove was set up in the kitchen, the family clock was ticking on its shelf, and the bureau set against the wall. It was amazing to see how these familiar things and his mother's bustling presence changed the looks of the cabin. Little Mary was quite happy crawling about the floor, and Owen, who had explored the barn and found a lizard to play with, was entirely at home. Lincoln had climbed to the roof of the house, and was still trying to comprehend this mighty stretch of grasses. Sitting astride the roof board, he gazed away into the northwest, where no house broke the horizon line, wondering what lay beyond that high ridge.

While seated thus, he heard a distant roar and trample, and saw a cloud of dust rising along the fence which bounded the farm to the west. It was like the rush of a whirlwind, and, before he could call to his father, out on the smooth sod to the south burst a platoon of wild horses, led by a beautiful roan mare. The boy's heart leaped with excitement as the shaggy colts swept round to the east, racing like wolves at play. Their long tails and abundant manes streamed in the wind like banners, and their imperious bugling voiced their contempt for man.

Lincoln clapped his hands with joy, and all of the family ran to the fence to enjoy the sight. A boy, splendidly mounted on a fleet roan, the mate of the leader, was riding at a slashing pace, with intent to turn the troop to the south. He was a superb rider, and the little Morgan strove gallantly without need of whip or spur. He laid out like a hare. He seemed to float like a hawk, skimming the weeds, and her rider sat him like one born to the saddle, erect and supple, and of little hindrance to the beast.

On swept the herd, circling to the left, heading for the wild lands to the east. Gallantly strove the roan with his resolute rider, disdaining to be beaten by his own mate, his breath roaring like a furnace, his nostrils blown like trumpets, his hoofs pounding the resounding sod.

All in vain; even with the inside track he was no match for his wild, free mate. The herd drew ahead, and, plunging through a short lane, vanished over a big swell to the east, and their drumming rush died rapidly away into silence.

This was a glorious introduction to the life of the prairies, and Lincoln's heart filled with boundless joy, and longing to know it—all of it, east, west, north, and south. He had no further wish to return to his coolly home. The horseman had become his ideal, the prairie his domain.