HERE was once upon a time an old man and an old woman. The old man worked in the fields as a pitch burner, while the old woman sat at home and spun flax. They were so poor that they could save nothing at all; all their earnings went in bare food, and when that was gone there was nothing left. At last the old woman had a good idea.

What was the poor man to do?

He set to work and made the ox of straw, and smeared it all over with tar.

The night passed away, and at early dawn the old woman took her distaff and drove the straw ox out to graze, and she herself sat down behind a hillock and began spinning her flax, and cried:

And the ox said:

"A three-year-old heifer am I, made of straw and smeared with tar."

"Oh!" said the bear, "stuffed with straw and trimmed with tar, are you? Then give me of your straw and tar, that I may patch up my ragged fur again!"

"Take some," said the ox, and the bear fell upon him and began to tear away at the tar. 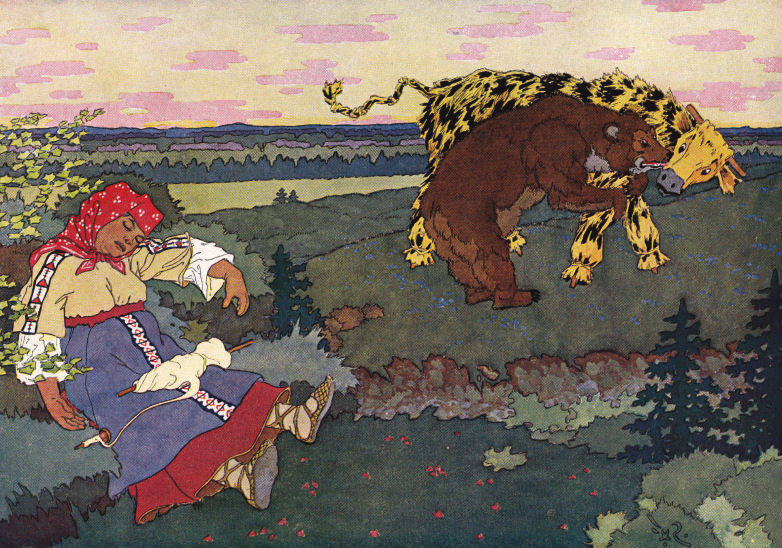 He tore and tore, and buried his teeth in it till he found he couldn't let go again. He tugged and he tugged, but it was no good, and the ox dragged him gradually off, goodness knows where. Then the old woman awoke, and there was no ox to be seen. "Alas! old fool that I am!" cried she, "perchance it has gone home." Then she quickly caught up her distaff and spinning-board, threw them over her shoulders, and hastened off home, and she saw that the ox had dragged the bear up to the fence, and in she went to her old man. "Dad, dad!" she cried, "look, look! the ox has brought us a bear. Come out and kill it!" Then the old man jumped up, tore off the bear, tied him up, and threw him in the cellar.

Next morning, between dark and dawn, the old woman took her distaff and drove the ox into the steppe to graze. She herself sat down by a mound, began spinning, and said:

"I am a three-year-old heifer, stuffed with straw and trimmed with tar," said the ox.

"Oh, trimmed with tar, are you? Then give me of your tar to tar my sides, that the dogs and the sons of dogs tear me not!"

"Take some," said the ox. And with that the wolf fell upon him and tried to tear the tar off. He tugged and tugged and tore with his teeth, but could get none off. Then he tried to let go, and couldn't; tug and worry as he might, it was no good. 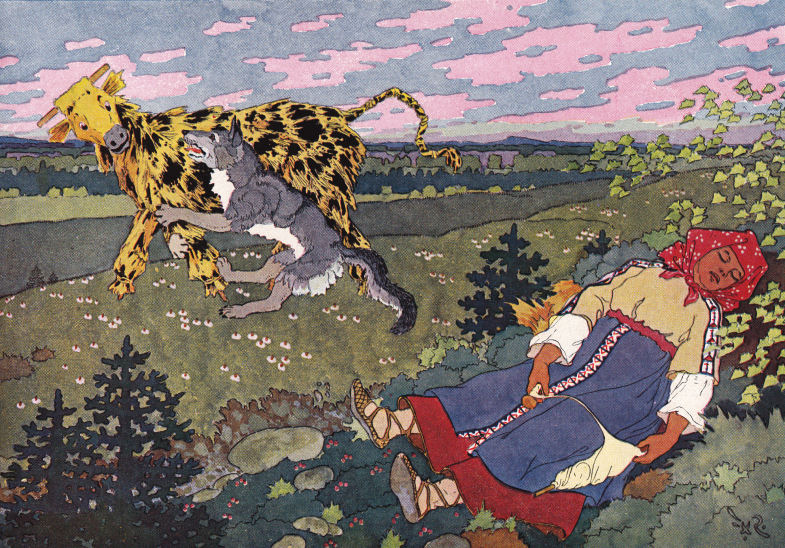 When the old woman woke, there was no ox in sight. "Maybe my ox has gone home!" she cried; "I'll go home and see." When she got there she was astonished, for by the paling stood the ox with the wolf still tugging at it. She ran and told her old man, and her old man came and threw the wolf into the cellar also.

On the third day the old woman again drove her ox into the pastures to graze, and sat down by a mound and dozed off.

Then a fox came running up. "Who are you?" it asked the ox.

"I'm a three-year-old heifer, stuffed with straw and daubed with tar."

"Then give me some of your tar to smear my sides with, when those dogs and sons of dogs tear my hide!" 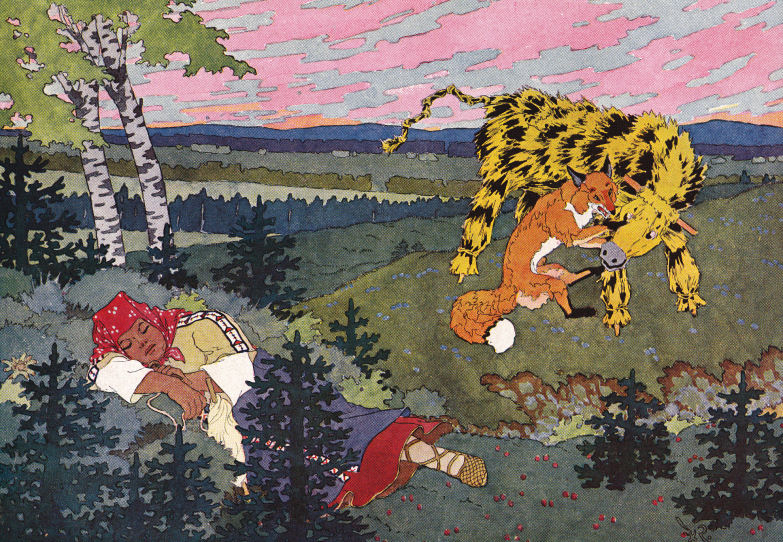 "Take some," said the ox. Then the fox fastened her teeth in him and couldn't draw them out again. The old woman told her old man, and he took and cast the fox into the cellar in the same way. And after that they caught Pussy Swiftfoot likewise.

So when he had got them all safely, the old man sat down on a bench before the cellar and began sharpening a knife. And the bear said to him:

"Tell me, daddy, what are you sharpening your knife for?"

"To flay your skin off, that I may make a leather jacket for myself and a pelisse for my old woman." 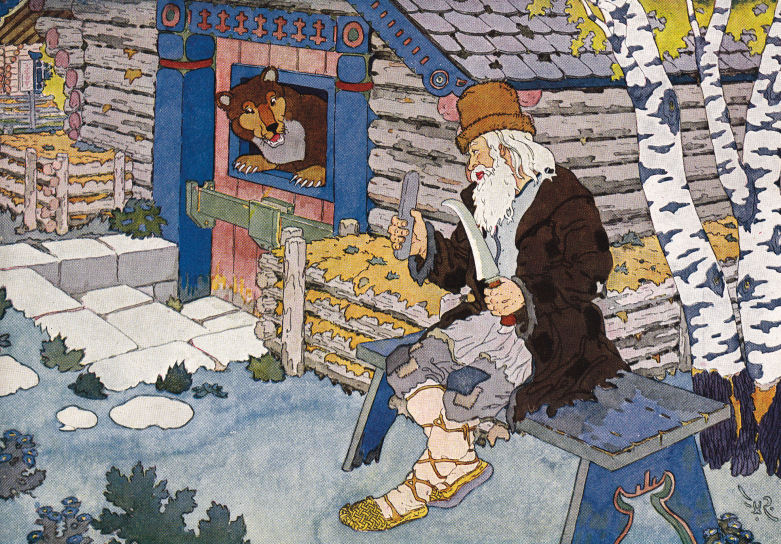 "Very well, see that you do it," and he unbound and let the bear go. Then he sat down on the bench and again began sharpening his knife. And the wolf asked him:

"Daddy, what are you sharpening your knife for?"

"To flay off your skin, that I may make me a warm cap against the winter."

"Oh! Don't flay me, daddy dear, and I'll bring you a whole herd of little sheep."

Then he sat down, and began sharpening his knife again.

The fox put out her little snout, and asked him:

"Be so kind, dear daddy, and tell me why you are sharpening your knife?"

"Little foxes," said the old man, "have nice skins that do capitally for collars and trimmings, and I want to skin you!"

"Oh! Don't take my skin away, daddy dear, and I will bring you hens and geese."

The hare now alone remained and the old man began sharpening his knife on the hare's account.

"Why do you do that?" asked the hare, and he replied:

"Little hares have nice little, soft, warm skins, which will make me nice gloves and mittens against the winter!"

"Oh, daddy dear! Don't flay me, and I'll bring you kale and good cauliflower, if only you let me go!"

Then he let the hare go also.

They then went to bed: but very early in the morning, when it was neither dusk nor dawn, there was a noise in the doorway like "Durrrrrr!"

"Daddy!" cried the old woman, "there's some one scratching at the door; go and see who it is!"

The old man went out, and there was the bear carrying a whole hive full of honey. The old man took the honey from the bear.

No sooner did he lie down than again there was another "Durrrrr!" at the door.

The old man looked out and saw the wolf driving a whole flock of sheep into the courtyard. Close on his heels came the fox, driving before him geese and hens, and all manner of fowls; and last all came the hare, bringing cabbage and kale, and all manner of good food.

As for the straw-stuffed ox, it stood in the sun till it fell to pieces.