Five years after Daniel Boone took his family to Kentucky there came over the mountains a man named Abraham Lincoln, bringing his wife and children. The Lincolns and Boones were friends. They were much the same kind of people, hunters and pioneers, always seeking a new and wild country to live in. This Abraham Lincoln, the friend of Boone, was a grandfather of President Abraham Lincoln, who was born in a log cabin in Kentucky in 1809.


When little Abe Lincoln was seven years old, his father moved from Kentucky to southwestern Indiana, which was then a wild country. Here he lived in a house of the roughest and poorest sort known to backwoods people. It had three sides closed with logs. The other side was left entirely open to the weather. There was no chimney, but the fire was built out of doors in front of the open side. There was no floor. Such a wretched shelter is called a "half-faced camp." It is not so good as some Indian wigwams. Of course, the food and clothes and beds of a family living in this way were miserable.

Poor little Abe Lincoln sometimes attended backwoods schools. The log schoolhouses in Indiana at that time had large open fireplaces, in which there was a great blazing fire in the winter. The boys of the school had to chop and bring in the wood for this fire. The floor of such a schoolhouse was of rough boards hewn out with axes. The schoolmasters were generally harsh men, who persuaded their pupils to study by means of long beech switches, such as they were accustomed to use in driving oxen. These schoolmasters did not know much themselves, but bright little Abe Lincoln soon learned to write. This was very handy for his father and other men in the neighborhood who could not write, and who got Abraham to write their letter for them.


Lincoln could not get many books to read in a community so destitute and illiterate. He could not have wasted his time and weakened his mind, as so many boys and girls do now, by reading exciting stories, for he did hot have them. He read carefully the books that he had. The Bible, Æsop's Fables, Pilgrim's Progress, a life of Washington, and life of Henry Clay he read over and over again, for he could get no other books. Whenever he heard any subject talked about that he did not understand, he would go off alone and think it out, and try to put it into clear words. This habit of close and careful thinking, and this practice in clothing his thoughts in word that exactly fitted them, was the best education in the world. Many boys and girls who have good schools and good books never learn to think for themselves. 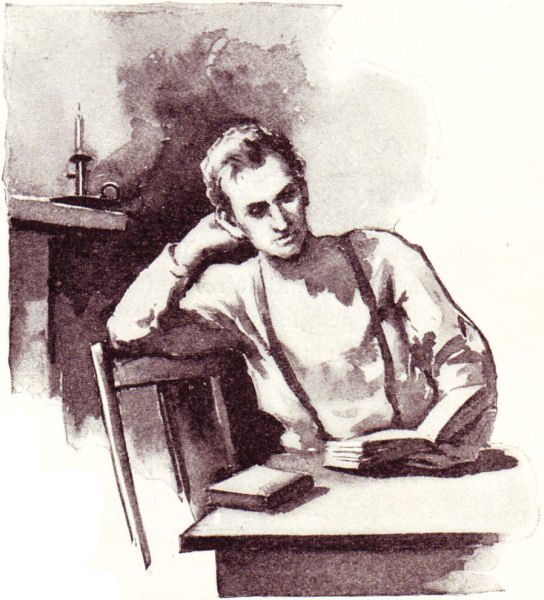 When one is poor, a little money means a great deal. One day Abraham Lincoln, by this time eighteen years old, rowed two men with their baggage from the shore out to a steamboat in the Ohio River. For this the men dropped two silver half-dollars into the boat. Abraham was overjoyed. To think that a poor boy could earn so much money in so short a time made the whole world seem wider and fairer before him, he said.


The people of southern Indiana in that day used to send what they raised on their farms to New Orleans. They loaded their corn, hay, and potatoes on large flatboats, sometimes a hundred feet long. These boats were floated on the current of the Ohio River to where that river empties into the Mississippi, and then down the Mississippi. It was a long voyage, and the boatmen had to live on their boats for many weeks. They rowed the boats with long sweeps, or oars, which required two and sometimes four men to move each one of them. Lincoln was much trusted, and when he was nineteen years old he was sent down the river in charge of one of these boats. This gave him his first knowledge of the world.

By the time he was twenty-one he had attained the height of six feet four inches. His father, who was always poor, once more sought a newer country by removing to Illinois. Here Abraham helped to build a log cabin, and then he split the rails to make a fence around the new cornfield. In order to get clothes, he went out to work as a hired man on a neighbor's farm. The cloth used by the Western people at that time was woven by hand in their own homes. Lincoln had to split four hundred rails to pay for each yard of the homespun brown jeans that went to make his trousers. Perhaps he was sorry to be so tall and to need so much cloth for a pair of trousers.


Lincoln went a second time on a flatboat to New Orleans. The boat was loaded with live hogs, and it is said that Lincoln, finding that the hogs could not be driven, carried them on board that boat in his long arms. After he came back he became a clerk in a country store, where he employed his spare time in reading. Like Franklin, he got his education by the right use of his leisure time. In this store he showed that careful honesty for which he was always remarkable. Once, when by mistake he had taken a "fip"—that is, six and a quarter cents—more than was due from a customer, he walked several miles the same night to return the money. When he found that, by using the wrong weight, he had given a woman two ounces of tea less than she ought to have had, he again walked a ling distance in order to make the matter right.

One of the things he wanted to learn was English grammar, in order to speak more correctly; but grammars were hard to find at that time. He heard of a man eight miles away who had a grammar, so he walked the eight miles and borrowed it. Lincoln got a lawyer who sometimes visited the store to explain what he could not understand in his grammar.