The Early Life of Columbus 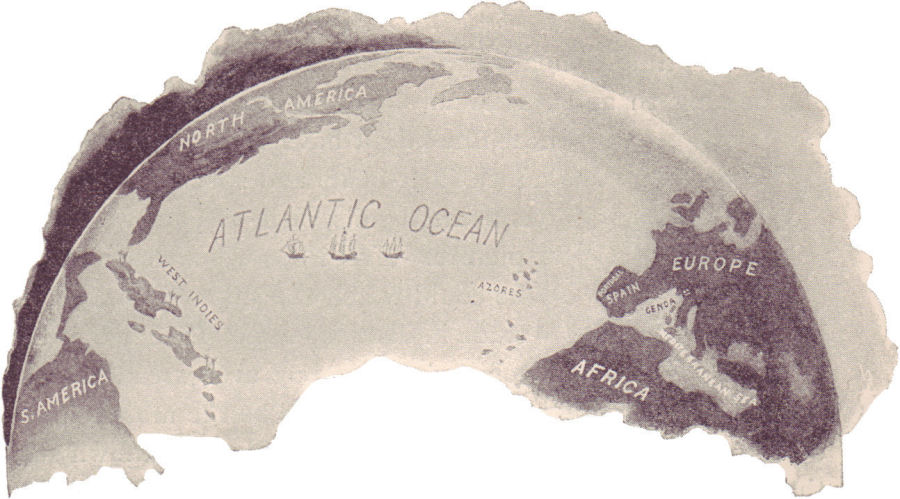 More than four hundred years ago there lived in the old city of Genoa [gen'-o-ah], in Italy, a workingman who had four sons. One of these was Christopher Columbus, who was born, probably about the year 1446, in that part of the city occupied by the weavers of woolen cloth. Learned men have lately taken much pains to find the very house. It is a narrow house, and dark inside. The city has bought it and put an inscription in Latin on the front, which says: "No house more worthy! Here, under his father's roof, Christopher Columbus passed his boyhood and youth." The father of little Christopher was a wool comber—that is, a man who prepared the wool for the spinners, or, as some say, a weaver. Christopher learned to work in wool, like his father.


At this time Genoa was a place of ships and sailors, going and coming to and from many parts of the world. On the beach he might have seen the fishermen launch their boats and spread their curious pointed sails, such as you see in the picture. From the wharves of Genoa he could watch the ships sailing out to trade in distant lands. I wonder if the wool-comber's little boy ever dreamed that he might one day come to be the most famous of all ship captains, and sail farther away into unknown seas than any man had ever sailed before.

Columbus was doubtless poor and had to work for his living. But he must have been studious, for he somehow got a pretty good education. He learned Latin, he wrote a good hand, and could draw maps and charts for the use of sailors, by which last calling he was able to support himself when he came to be a man. At twenty-four years of age Columbus made a voyage, but he was at least twenty-seven years of age when he finally became a seaman, and began to acquire that knowledge of sailing which prepared him to make discoveries. The seamen of that time did not sail very far. Their voyages were mostly in the Med-i-ter-ra'-ne-an, and they knew little of the Atlantic Ocean, which they called "The Sea of Darkness," because they did not know that was in it or on the other side of it. They believed that great monsters swam in the ocean, and that in one part it was so hot that the water boiled.


Of course, they did not know that there was any such place as America, and they believed that Africa reached clear to the south pole. The only trade they had with Asia was by caravans, which brought silks, gums, spices, and precious stones from the far East on the backs of camels.

While Columbus was yet a little boy, there was living in Portugal [poar'-tu-gal] a prince named Henry, the son of the king of that country. Henry was a learned man, who thought he could find a way to get round Africa to the rich countries of Asia. He sent out ship after ship, until he had discovered much of the African coast.


It was probably the fame of these voyages that drew Columbus to Portugal. From Portugal Columbus himself sailed down the newly discovered coast of Africa. Then he went north beyond England, so that he was already a very great traveler for the time.

While the Portuguese [poar'-tu-gueze], in trying to get to India, were creeping timidly down the coast of Africa, with land always in sight, Christopher Columbus conceived a new a far bolder plan. As learned man believed the world round, he proposed to sail straight west to Asia, braving all the dangers of the known Atlantic. He thought the world much smaller than it is, and he supposed that he should find Asia about as far west of Europe as America is. He did not dream of finding a new world.

As Portugal was the leading country in making discoveries, Columbus first proposed to find this new way to Asia for the king of that country. If the good Prince Henry had been alive, he would probably have adopted the plan with joy. But "Henry the Navigator," as he was called, had died long before, and the advisers of the King of Portugal ridiculed the plan, and laughed at the large reward which Columbus demanded if he should succeed. However, the king secretly sent out one of his own vessels, which sailed westward a little way, and then came back and reported that there was no land there. When Columbus heard of this, he left Portugal, not liking to be cheated in this way.

He went to Spain and appeared at court, a poor and friendless stranger. Spain was ruled at this time by King Ferdinand and Queen Isabella. They were very busy in their war with the Moors, who then occupied a great part of Spain. Columbus followed the court from place to place for years. But the king and queen paid little heed to the projects of this foreigner. They were too much employed with battles and sieges to attend to plans for finding a new way to India.


Most of those who heard of Columbus ridiculed his plans. They did not believe that people could live on the other side of the world, and walk with their feet up and their heads down. The very children tapped their foreheads when Columbus passed, to signify their belief that the fellow was crazy.

In 1491 Columbus, whose plans were at last rejected, left the court, traveling on foot like the poor man that he was, and leading his little boy by the hand. He stopped one day at the convent of La Rabida [la rab'-ee-dah] to beg a little bread and water for the child. The good prior of the convent, happening to pass at that moment, was struck with the foreign accent of the stranger's speech. He began to talk with him, and soon learned of the project that had so long filled the mind of Columbus. The prior was deeply interested. He had once been the confessor, or religious adviser, of Isabella, and he now wrote the queen a letter in favor of the plan of Columbus. The queen sent for the prior, and he persuaded her to bring back Columbus. She sent the great navigator a mule and some decent clothes. 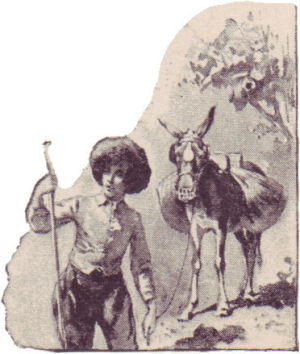 But Columbus, when he got back to court, still demanded such high rewards if he should succeed that he was again allowed to depart. He set out to offer his plan to the King of France; but now his friends again interceded with the queen, lamenting that Spain should lose his services. The queen sent a messenger after him, who overtook him in a pass of the mountains and brought him back, with the assurance that, at last, he would be sent forth on his voyage.