One of the members of Congress who signed the Declaration of Independence in 1776 was Benjamin Harrison, a stout and jolly man. When Congress chose John Hancock for its President, or chairman, Hancock made a modest speech, as though he would decline the place. But Benjamin Harrison just took him up in his arms and set him down in the chair.

The third son of this Benjamin Harrison was William Henry Harrison. He was born in Virginia in 1773. His father died when he was young. Young Harrison began the study of medicine, but there was a war with the Indians in the West, and he wanted to go to the war. His guardian wished him to stick to his study of medicine; but there was more soldier than doctor in Harrison, and President Washington, who had been his father's friend, made the young man an officer in the army when he was but nineteen years old.

When Harrison got to the western country the army, under the lead of General St. Clair, had been surprised by the Indians and defeated. Washington appointed General Wayne to take St. Clair's place, and Wayne gave Harrison a place on his staff. Wayne trained his men carefully, and practiced them in shooting, and when he marched it was with every care not to be surprised. The Indians called Wayne "the Chief who never Sleeps." He fought a battle with the Indians on the Maumee River, in Ohio, and he pushed them so hotly with bayonets and guns fired at short range that the Indians fled in every direction. They were so thoroughly beaten that they made peace with the white people, and the Western settlers had rest from war for a while.

In 1801 a new Territory, called Indiana, was formed. It took in all the country which now lies in Indiana, Illinois, and Wisconsin, and it had but few white people in it. Harrison was made governor of this large region.

There was a young Shawnee warrior, Tecumseh [te-cum´-seh], who had fought against Wayne in 1794. He was much opposed to the Indians' selling their lands. He declared that no tribe had a right to sell land without the consent of the other tribes. There were at that time seventeen States, and the Indians called the United States the "Seventeen Fires." Tecumseh got the notion of forming all the Indian tribes into a confederacy like the "Seventeen Fires," or States, of the white men.

Tecumseh was not born a chief, but he had gathered a great band of followers, and had thus become a powerful leader. He made long journeys to the North and West, and then traveled away to the South to bring the Indians into his plan for a great war that should drive the white people back across the Alleghany Mountains. In one council at the South the Indians refused to join him. Tecumseh told them that, when he got to Detroit, he would stamp on the ground and make the houses in their village fall down. It happened soon after that an earthquake did destroy some of their houses, and the frightened Indians said, "Tecumseh has arrived at Detroit." They immediately got ready to help him against the white people.

Tecumseh had a brother who pretended to be a prophet, and who was called "The Open Door." He gathered many Indians about him at Tippecanoe, in Indiana, and he preached a war against the white people.

Governor Harrison held a council with Tecumseh at Vincennes. Seats were placed for the chief on the piazza of the governor's house, but Tecumseh insisted on holding the council in a grove. He said that the white people might bring out some chairs for themselves, but that the earth was the Indians' mother, and they would rest on her bosom.


In the discussions Tecumseh grew very angry, and his warriors seized their tomahawks and sprang to their feet. Harrison drew his sword, a white man near him showed a dirk, and a friendly Indian cocked his pistol to defend the governor, while a Methodist minister ran with a gun to protect Harrison's family. Others present armed themselves with clubs and brickbats. The soldiers now came running up to fire on the Indians; but Harrison stopped them, and told Tecumseh that he was a bad man, and that he could now go.

Tecumseh cooled down and had another talk with the governor the next day, and Harrison even went to the chief's tent with only one companion.

But General Harrison soon saw that, in spite of all he could do, war would come. Tecumseh went South to stir up the Southern tribes. He gave these far-away Indians bundles of sticks painted red. He told them to throw away one stick every day, and, when all were gone, they were to fall upon the white people.

But General Harrison thought, if there had to be war, he would rather fix the time for it himself; so, while Tecumseh was leaving his almanac of red sticks in the South, the general marched from Vincennes [van-senz´], up the Wabash [waw´-bash] to Tippecanoe [tip´-pe-ka-noo´], which was Tecumseh's home. Knowing that the Indians would try to surprise him, he fooled them into believing that he was going up on one side of the river, and then crossed to the other. He got nearly to Tippecanoe in safety, but the prophet sent messengers to him, pretending that the Indians would make peace the next day.


Harrison's men lay on their arms that night. About four o'clock on the morning of November 7, 1811, the general was pulling on his boots, intending to awaken the army, when a sentinel fired at a skulking Indian, and the war whoop sounded from the tall grass on every side. The white men put out their camp fires, so that the Indians could not see to shoot at them, and the fierce battle raged in the darkness. The signals to charge and to fall back were given to the Indians by the rattle of deers' hoofs. The prophet sung a wild war song on the neighboring hill, after promising his followers that bullets should not hurt them. But many an Indian and many a white man fell in that bloody struggle. When daylight came, Harrison's men made a charge which drove away the savages.

Harrison burned the village of Tippecanoe, and Tecumseh came back to find his plan for driving the white men over the mountains spoiled. But the war with England broke out soon after this, and Tecumseh entered the British army, and was made a brigadier general.

General Harrison was now once more opposed to Tecumseh, for he was put in command of the United States army in the West. In 1813 he was besieged in Fort Meigs [megs] by an English army under General Proctor and a body of Indians under Tecumseh.

While the English were building their batteries to fire into the fort, the Americans were very busy also, but they kept a row of tents standing to hide what they were doing. When the English guns were ready, the Americans took down their tents and showed a great earthwork that would shelter them from the batteries. This made Tecumseh angry. He said that General Harrison was like a ground hog—he stayed in his hole, and would not come out and fight like a man.

Proctor, though belonging to a civilized nation, was a heartless brute. Tecumseh was a born a savage, but he was always opposed to cruelty. Some of Harrison's men had been captured, and Proctor allowed the Indians to put them to death. When Tecumseh saw what was going on, he rushed in between the Indians and their prisoners with his tomahawk in hand, and stopped the slaughter.

"Why did you allow this?" he demanded of General Proctor.

"I could not control the Indians," said Proctor.

The English fleet on Lake Erie was beaten in a fight with the American ships under Commodore Perry in the fall of 1813. Harrison now crossed into Canada, and the British army retreated to the river Thames [temz], where Harrison overtook it, and a battle followed. Proctor was afraid to fall into the hands of the Americans, who hated him for his cruelties to prisoners and the wounded. He ran away before the battle was over. Brave Tecumseh was killed in this fight. 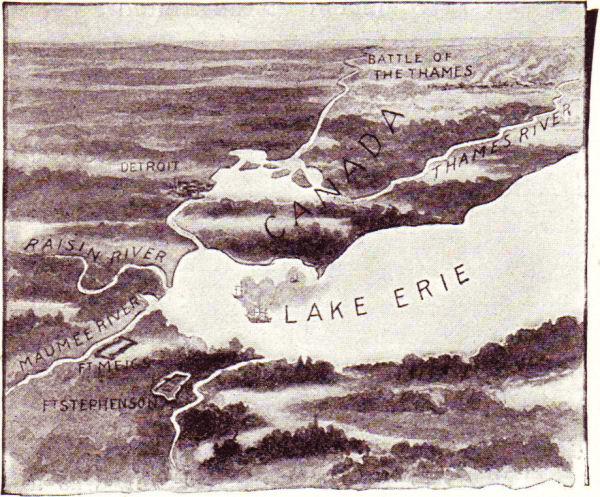 Harrison left the army soon after this. In 1840 he was living in a simple way on his farm at North Bend, in Ohio, when he was nominated for President of the United States. He was elected, but he died on the 4th of April, 1841, one month after taking office.