Three hundred years ago England was rather poor in people and in money. Spain had become rich and important by her gold mines in the West Indies and the central parts of America. Portugal had been enriched by finding a way around Africa to India, where many things such as silks and spices were bought to be sold in Europe at high prices. Some thoughtful men in England had an idea that as the Portuguese had reached India by sailing round the Eastern Continent on the south, the English might find a way to sail to India around the northern part of Europe and Asia. By this means the English ships would also be able to get the precious things to be found in the East.

For this purpose some London merchants founded the Mus'-co-vy Company, with old Sebastian Cabot at its head. This Muscovy Company had not succeeded in finding a way to China round the north of Europe, but in trying to do this its ships had opened a valuable trade with Russia [rush'-ah], or Muscovy as it was then called, which was a country but little known before.

One of the founders of this Muscovy Company was a rich man named Henry Hudson. It is thought that he was the grandfather of Henry Hudson, the explorer. The merchants who made up this company were in the habit of sending out their sons, while they were boys, in the ships of the company, to learn to sail vessels and to gain a knowledge of the languages and habits of trade in distant countries. Henry was sent to sea while a lad, and was no doubt taught by the ship captains all about sailing vessels. When he grew to be a man, he wished to make himself famous by finding a northern way to China.

In the spring of 1607, almost four months after Captain Smith had left London with the colony bound for Jamestown, his friend Hudson was sent out by the Muscovy Company to try once more for a passage to China. He had only a little ship, which was named Hopewell, and he had but ten men, including his own son John Hudson. He found that there was no way to India by the north pole. But he went farther north than any other man had gone.

Hudson made an important discovery on this voyage. He found whales in the Arctic Seas, and the Muscovy Company now fitted out whaling ships to catch them. The next year the brave Hudson tried to pass between Spitz-berg'-en and Nova Zembla [no'-vah zem'-blah], but he was again turned back by the walls of ice that fence in the frozen pole.

By this time the Muscovy Company was discouraged, and gave up trying to get to India by going round the north of Europe. They thought it better to make money out of the whale fishery that Hudson had found. But in Holland there was the Dutch East India Company, which sent ships round Africa to India. They had heard of the voyages of Hudson, who had got the name of "the bold Englishman." The Dutch Company was afraid that the English, with Hudson's help, might find a nearer way by the north, and so get the trade away from them. So they sent for "the bold Englishman," and hired him to find this new route for them.

Hudson left Amsterdam in 1609 in a yacht called "The Half Moon." He sailed round Norway and found his old enemy the ice as bad as ever about Nova Zembla. Just before leaving home Hudson had received a letter from his friend Captain John Smith, in Virginia, telling him that there was a strait leading into the Pacific Ocean, to the north of Virginia. Hudson persuaded his men to turn about and sail with him to America to look for the way to India that Smith had written about.


So they turned to the westward and sailed to Newfoundland, and thence down the coast until they were opposite James River. Then Hudson turned north again, and began to look for a gateway through this wild and unknown coast. He sailed into Delaware Bay, as ships do now on their way to Philadelphia. Then he sailed out again and followed the shore till he came to the opening by which thousands of ships nowadays go into New York.


He passed into New York Bay, where no vessel had ever been before. He said it was "a very good land to fall in with, and a pleasant land to see." The New Jersey Indians swarmed about the ship dressed in fur robes and feather mantles, and wearing copper necklaces. Hudson thought some of the waterways about New York harbor must lead into the Pacific.

He sent men out in a boat to examine the bays and rivers. They declared that the land was "as pleasant with grass and flowers as ever they had seen, and very sweet smells." But before they got back, some Indians attacked the boat and killed one man by shooting him with an arrow. 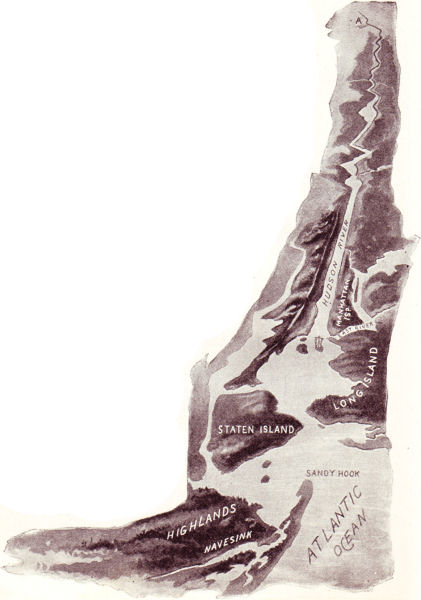 When the Indians came round the ship again, Hudson made two of them prisoners, and dressed them up in red coats. The rest he drove away. As he sailed farther up from the sea, twenty-eight dugout canoes filled with men, women, and children, paddled about the ship. The white men traded with them, giving them trinkets for oysters and beans, but none were allowed to come aboard. As the ship sailed on up the river that we now call the Hudson, the two Indian prisoners saw themselves carried farther and farther from their home. One morning they jumped out of a porthole and swam ashore, without even stopping to say good-by. They stood on the bank and mocked the men on the Half Moon as she sailed away up the river.

Hudson's ship anchored again opposite the Catskill Mountains, and here he found some very friendly Indians, who brought corn, pumpkins, and tobacco to sell to the crew. Still farther up the river Hudson visited a tribe on shore, and wondered at their great heaps of corn and beans. The chief lived in a round bark house. Captain Hudson was made to sit on a mat and eat from a red wooden bowl. The Indians wished him to stay all night; they broke their arrows and threw them into the fire, to show their friendliness. 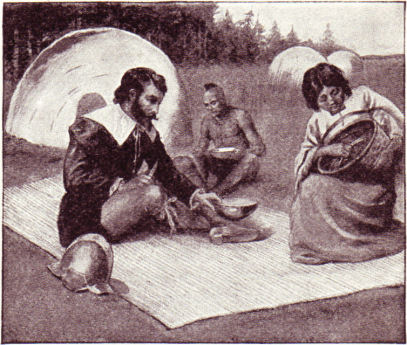 Hudson found the river growing shallower. When he got near where Albany now stands he sent a rowboat yet higher up. Then he concluded that this was not the way to the Pacific. He turned round and sailed down the river, and then across the ocean to England. The Half Moon returned to Holland, and the Dutch sent out other ships to trade in the river which Hudson had found. In the course of time they planted a colony where New York now stands.

Captain Hudson did not try to go round the north of Europe any more. But the next spring he sailed in an English ship to look for a way round the north side of the American Continent. On this voyage he discovered the great bay that is now called Hudson Bay.

In this bay he spent the winter. His men suffered from hunger and sickness. In the summer of 1611, after he had, with tears in his eyes, divided his last bread with his men, these wicked fellows put him into a boat with some sick sailors and cast them all adrift in the great bay.

The men on the ship shot some birds for food, but in a fight with the Indians some of the leaders in the plot against Hudson were killed. The seamen, as they sailed homeward, grew so weak from hunger that they had to sit down to steer the vessel. When at last Juet, the mate, who had put Hudson overboard, had himself died of hunger, and all the rest had lain down in despair to die, they were saved by meeting another ship.