The two best things about Captain John Smith were, that he was never idle and he never gave up. He was a good man to have in a colony, for he was always trying to find out something new or to accomplish some great thing. He had not found a way to China in the swamps on the Chickahominy River; he had only found a mudhole, and got himself captured by the Indians. But he thought he might find the Pacific Ocean by sailing up the Chesapeake [ches'-a-peak] Bay. So he went twice up this bay, exploring at last to the very head of it. Of course, he did not find a way into the Pacific Ocean. We know well enough nowadays that China is not anywhere in the neighborhood of Baltimore. But Smith made a good map of the great bay, and he bought corn from the Indians, and so kept the colony alive. This was better than finding a way to China, if he had only known it. 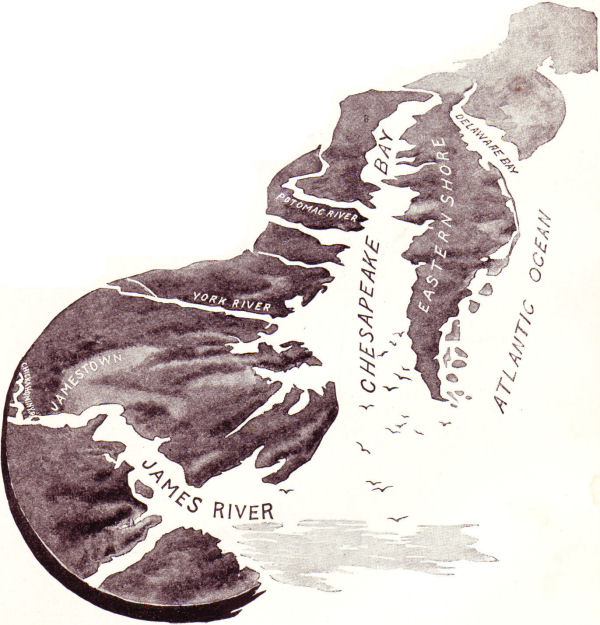 In living in an open boat and sailing among Indians that were very suspicious and unfriendly, Smith and his men had to suffer many hardships. They were sometimes nearly wrecked by storms, and once when their sail had been torn to pieces they patched it with the shirts off their backs. Their bread was spoiled by the splashing of the salt water, and they suffered to much from thirst that at one time they would have been willing to give a barrel of gold, if they had only had it, for a drink of puddle water. Sometimes, when sleeping on the ground, they got so cold that they were forced to get up in the night and move their fire, so that they could like down on the warm earth where the fire had been. 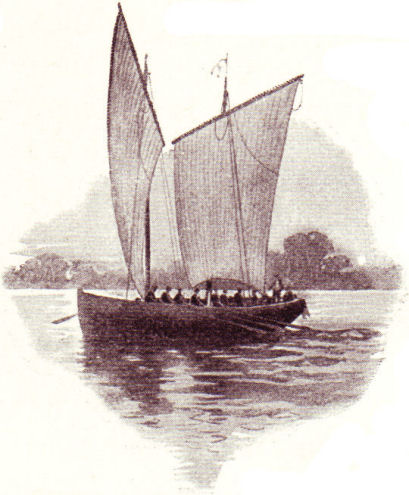 At one place the Indians shot arrows at them from the trees. Then they tried to get the Englishmen to come on

shore by dancing with baskets in their hands. Captain Smith says that he felt sure they had nothing in their baskets but villainy. So he had his men fire off their guns. The noise of the guns so frightened the savages that they all dropped to the ground and then fled into the woods. Smith and his men now ventured ashore and left presents of beads, little bells, and looking-glasses in their wigwams. Pleased with these things, the Indians became friendly and fell to trading.


Once, when many of Captain Smith's men were ill, the Indians attacked him. Smith put his sick men under a tarpaulin, and mounted their hats on sticks among his well men, so that the boat appeared to have its full force. Having procured Indian shields of wickerwork, Captain Smith put them along the side of his boat, so as to fight from behind them. But he generally made friends with the Indian tribes, and he came back to Jamestown with plenty of corn and furs.

Powhatan, the greatest of the Indian chiefs, wanted to get the arms of the white men. Muskets, swords, and pistols

were now and then stolen by the Indians, and Captain Smith tried to put a stop to this thievery. Two Indians who were brothers stole a pistol. They were captured, and one of them was put into prison, while the other was sent to get the pistol. The one in the prison was allowed a fire of charcoal, to keep him from freezing. When his brother came back the prison was found smothered by the gas from the charcoal fire. The other poor fellow was heartbroken; but Captain Smith succeeded in reviving the one that had been smothered. From this the Indians concluded that he was not only a great brave, but a great medicine man as well, who could bring dead people to life.

At another time an Indian stole a bag of gunpowder, which was a thing of wonder to the savages. He also stole a piece of armor at the same time. He had seen white men dry their powder when wet by putting it into a piece of armor and holding it over the fire. He tried to do the same thing; but the fire was too hot for the powder, and the Indian was treated to a very great surprise. This terrified the savages for a time. 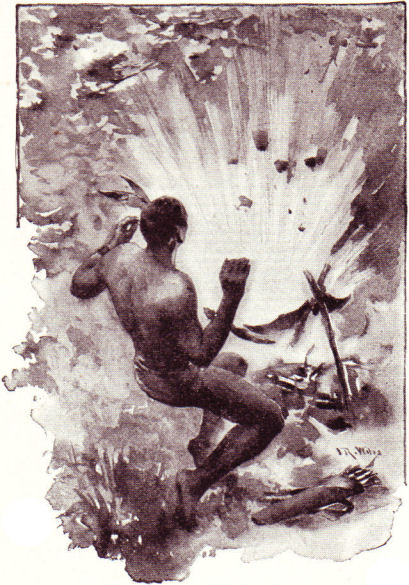 In 1609 there were many newcomers, and Captain Smith's enemies got control of the colony. They sent Smith home, and he never saw Virginia again.

Captain Smith afterwards sailed on a voyage to New England in 1614. While his men caught and salted fish to pay for the expense of the voyage, Smith sailed in an open boat along the New England coast. He traded with the Indians, giving them beads and other trinkets for furs. He also made the first good map of the coast. After he had returned to England with furs, Hunt, who was captain of his second ship, coaxed twenty-four Indians on board and then sailed away with them to Spain. Here he made sale of his shipload of salted fish, and began to sell the poor Indians for slaves. Some good monks, finding out what he was doing, stopped him and took the Indians into their convent to make Christians of them. One of these Indians, named Squanto [squon'-to], afterwards found his way to England, and from there was taken back to America.

Captain Smith tried very hard to persuade English people to plant a colony in New England. He finally set out with only sixteen men to begin a settlement there. He had made friends with the New England Indians, and he was sure that with a few men he could still succeed in planting a colony. But he had very bad luck. He first lost the masts of his vessels in a storm. He returned to England again and set sail in a smaller ship. He was then chased by a pirate vessel. Smith found, on hailing this ship, that some of the men on board had been soldiers under him in the Turkish wars. They proposed to him to be their captain, but he did not want to command such rogues.

Smith's little vessel had no sooner got away from these villains, than he was chased by a French ship. He had to threaten to blow up his ship to get his men to fight. He escaped again, but the next time he was met by a fleet of French privateers. They made Smith come aboard one of their vessels to show his papers. After they had got him out of his ship they held him prisoner and took possession of his cargo. They afterwards agreed to let him have his vessel again, as he was still determined to sail to New England; but his men wanted to turn back; so, while Smith was on the French ship, his own men ray away with his vessel and got back to England. Thus his plan for a colony failed.

Smith spent his summer in the French fleet. When the French privateers were fighting with an English vessel they made Smith a prisoner in the cabin; but when they fought with Spanish ships they would put Smith at the guns and make him fight with them. Smith reached England at last, and had the satisfaction of having some of his runaway sailors put into prison. He never tried to plant another colony, though he was very much pleased with the success of the Plymouth colony which settled in New England a few years later than this. This brave, roving, fighting, boasting captain died in 1631, when he was fifty-two years old.