Washington in the Revolution

Washington lived for many years quietly at Mount Vernon, and he did not intend to have anything more to do with a soldier's life. He was fond of hunting and fishing. He sometimes helped to haul a seine in the Potomac River. He rode over his large plantation to see that all went well, and he made maps of all his fields, and kept his accounts carefully and neatly, as he had always done. All traveling strangers were sure of welcome at his house, and the poor, when in danger of suffering, were provided with corn from his granary.

But, as time went on, the English Parliament tried to collect a tax from the Americans. The Americans declared that, so long as they elected no members of Parliament, that body had no right to tax them without the consent. But the men who governed in England did not think that people in the colonies had the same rights as people in England, so they oppressed the Americans in many ways. Without asking consent of the colonies, they put a tax on all the tea that came into America; and when some of the tea got to Boston, the people turned Boston Harbor into one big teapot by pitching the whole shipload of tea into the water. The English government resolved to punish Boston, but the other colonies took sides with the people of that town.

In order to make the English government cease their oppressions, the Americans agreed not to wear clothes made of English cloth, nor to use anything else brought from England. Washington and other great gentlemen of that time put on homespun American clothes, which were coarse, for the Americans had not yet learned how to make fine goods. American ladies, who were extremely fond of tea, which they drank from pretty little cups brought from China, now gave up their favorite drink. Instead of it, they sipped a tea made from the leaves of the sage plants in their gardens, or from the roots and flowers of the sassafras. Probably they tried to drink these homegrown teas with cheerful faces, and to make believe that they liked sage and sassafras as well as the real tea from China. It must have been a pleasure to feel that they were fighting a battle for liberty over their tea tables.

Washington, in his quiet way, was a strong supporter of liberty against the King of England and the Parliament. In order to bring all the thirteen colonies to stand by one another against England a meeting, called a "Congress," was appointed in 1774, and men were sent from each colony to attend it. Washington was a member of this Congress, which sent a letter to the king, demanding that they should be allowed the same liberties as his subjects in England.

But neither the King of England nor the English Parliament would repeal the laws which the Americans disliked. As the Americans would not obey them, the quarrel grew hotter, and English troops were sent to bring the Americans to submit. On the 19th of April, 1775, the Revolutionary War was begun by a battle at Lexington, near Boston, between British troops and American farmers. These farmers, who were called "minutemen," drove the troops back into Boston, firing on them from every field and fence as they retreated.


Seeing that war had begun, Congress looked about for a leader. They remembered the prudent and brave conduct of Colonel George Washington, when a young man, in the French and Indian War. He was chosen to be general and commander in chief of all the armies of the colonies.

Before Washington reached the army near Boston, the battle of Bunker Hill had taken place. In this battle the Americans had been driven from the hill, but their little force of plain countrymen had fought so stubbornly against the well-trained English troops that all America was encouraged. 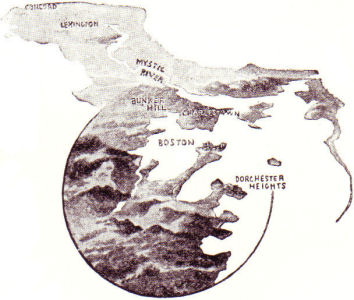 For many months Washington kept a fine British army shut up in Boston. When he was strong enough he suddenly sent a body of troops to Dorchester Heights, near Boston, where, by the help of bales of hay, breastworks were built in a single night. When the English general saw these works, he said, "The rebels have done more in one night than my army would have done in one month." The Americans began to throw shells from the Dorchester battery into Boston, which soon became so uncomfortable a place to stay in that the English army got into ships and sailed away.

The Americans at first were fighting only to get their rights as subjects of England. But since neither the King nor the Parliament of England would let them have their rights, they got tired of calling themselves Englishman. They determined to set up an independent government. On the 4th of July, 1776, Congress declared the colonies "free and independent." This is called the "Declaration of Independence."

Soon after the Declaration was adopted the English government sent a fleet and an army to take New York. Washington fought against the English army on Long Island, and was defeated and forced to give up New York. After a while he had to fall back across New Jersey. It seemed as though all were lost. But though his men were too few to fight the whole English army, Washington felt that he must strike a blow at some part of it in order to give the Americans courage. The English people did not like the war against the Americans, so the king had hired some Hessian soldiers to fight for him. About a thousand of these were in Trenton, N.J., while Washington was on the other side of the Delaware, a little way off. On Christmas night the Hessians were celebrating the day. Washington celebrated it in his own fashion. He took part of his army, and crossed the Delaware in the midst of floating ice. There was a severe snowstorm, and two of his men were frozen to death. He marched quickly to Trenton, and after a sharp fight he took about a thousand prisoners, as Christmas presents for his country.


Washington got back across the Delaware with his prisoners, but in a few days he was again in Trenton, where he came near being surrounded and captured by the English general Cornwallis. The Delaware was so full of ice that the Americans could not get back to the other side of it, and a strong English force was pressing upon them in front. Something must be done quickly. So at night Washington had all his camp fires built up, in order to deceive the enemy. He put a few men to digging in the trenches, and had them make as much noise as possible. Then he took his army silently by a back road around the English army till he got behind it. While Cornwallis thought he had Washington cooped up in Trenton, the Americans were marching on Princeton, where there was a detachment of the English troops. Washington, after a sharp battle, defeated the English in Princeton. Cornwallis had gone to bed boasting that he "would bag the fox" in the morning; but when morning came, "the fox" was gone. Cornwallis thought at first that the Americans had retreated across the Delaware, but soon he heard the booming of cannons away behind him at Princeton; then he knew that Washington had outwitted him. He had to hasten back to New Brunswick to save his stores, while Washington went into the hills at Morristown, having forced the British to give up the greater part of New Jersey. 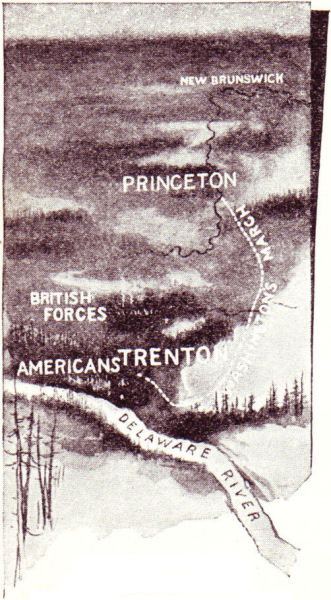