On the estate of Lord Willoughby, in the eastern part of England, there was a family of poor tenants named Smith, who had a son born in 1579. The named him John. John Smith is the most common of names, but this was the most uncommon of all the John Smiths. He was apprenticed to learn a trade, but he ran away from his master and became, for a while, a servant to Lord Willoughby, who was going to Holland.

Like most runaway boys, he found the world a hard place, and had to lead a very rough-and-tumble life. He enlisted as a soldier; he was shipwrecked; he was robbed and reduced to beggary; and, if we may believe his own story, he was once pitched into the sea by a company of pilgrims, who thought that he had caused the storm, like Jonah in the Bible. This must have happened not far from shore, for he reached land without the aid of a whale, and went into the war against the Turks. There he killed three Turks in single combat, and cut off their heads, but Captain John Smith came near losing his own head in the fight with the last one. 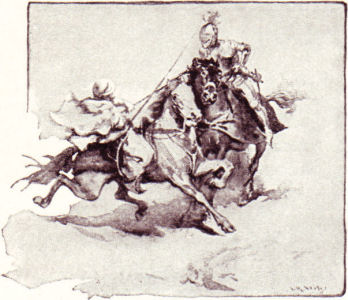 The Turks captured Smith afterwards and made him a slave. His Turkish master was very cruel, and put an iron collar on his neck. While Smith was thrashing wheat one day with his dog collar on, the Turk began to thrash him. Smith grew angry, and, leaving the wheat, hit his master with the flail, killing him on the spot. Then he took a bag of wheat for food, mounted his master's horse and escaped to the wilderness, and got out of Turkey. 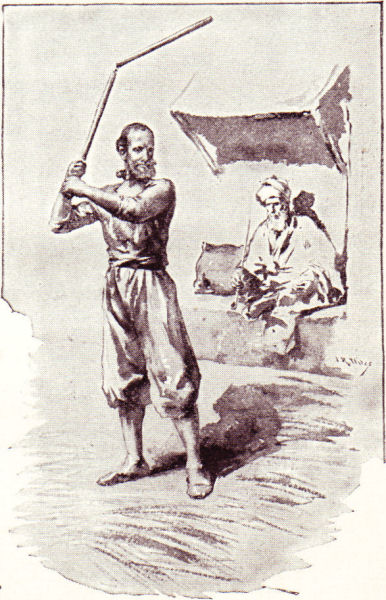 When, at last, Captain Smith got back to England with his wonderful budget of stories about narrow escapes and bloody fights, he probably found it hard to settle down to a peaceful life. The English people were just then talking a great deal about settling a colony in North America, which was quite wild and almost wholly unexplored. Nothing suited the wandering and daring Captain Smith better. He joined the company which set sail for America, in three little ships, in 1606. The largest of these was called the Susan Constant.

I am sorry to say the people sent out in this first company were what we should call nowadays a hard set. They were most of them men who knew nothing about work. They had heard how the Spaniards grew rich from the gold and silver in South America, and they expected to pick up gold without trouble.

The colony was settled at a place called Jamestown. Soon after the settlers landed the Indians attacked them while they were unarmed, and the settlers might all have been put to death with the bows and arrows and war clubs of the savages, if the people on one of the ships had not fired a cross-bar shot—such as you see in the picture. This cross-bar shot happened to cut down a limb of a tree over the heads of the Indians. When they heard the noise of the cannon, like thunder, and saw the tree tops come tumbling on their heads, the savages thought it was time to make good use of their heels. 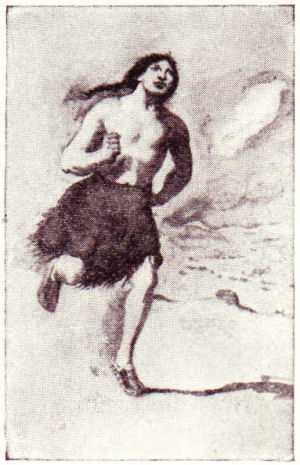 The people of that day did not know how to plant colonies, and the lack of good food and shelter caused the death of more than half of the Jamestown settlers. The Indians who lived near them had fields of Indian corn, whose streaming blades and waving tassels were a strange sight to Englishmen. When at last the corn was ripe, Captain John Smith set sail in a small boat and traded a lot of trinkets to the Indians for corn, and so saved the lives of many of the people.


The English thought America was only a narrow strip of land. They were still looking for a way to India, as Columbus had looked for one more than a hundred years before. The King of England had told them to explore any river coming from the northwest. Smith therefore set out to sail up the little Chickahom'iny River to find the Pacific Ocean, not knowing that this ocean was nearly three thousand miles away.

The daring captain left his two men in charge of the boat while he went on farther. The Indians killed the men and then pursued Smith. Smith had taken an Indian prisoner, and he saved himself by putting this prisoner between him and his enemies. But the Indians caught Smith after he had fled into a swamp, where he sank up to his waist in the mud, so that he could neither fight nor run. He made friends with the head Indian of the party by giving him a pocket compass and trying to explain its use.


As all the Indians had a great curiosity to see a white man, Smith was marched from one Indian village to another; but he was treated with a great deal of respect. Perhaps the Indians thought that men who sailed in big canoes and discharged guns that blazed and smoked and made a noise like thunder and knocked the trees down, must have some mysterious power. But they also thought that if they could persuade the white people to give them some big guns they could easily conquer all the Indian tribes with which they were at war.

The Indians surrounded Smith with curious charms by way of finding out whether he was friendly to them or not. They fed him very well; but Smith, who was as ignorant of Indians as they were of white people, thought that they were fattening him to eat him, so he did not have much appetite.

Powhatan [pow-ha-tan'] was the name of the great chief of these Indians. This chief set Smith free. He sent some men along with him on his return to Jamestown to bring back two cannons and a grindstone in exchange for the prisoner; but the Indians found these things rather too heavy to carry, and they were forced to return with nothing but trinkets. 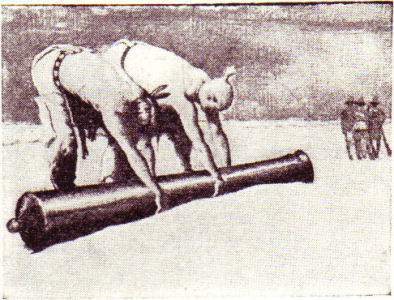 Captain Smith seems to have been the best man to control the unruly settlers and manage the Indians. The people in England who had sent out this colony thought they could make the chief, Powhatan, friendly by sending him presents. They sent him a crown, a wash basin, and a bedstead, also a red robe, and other things quite unnecessary to a wild Indian. But when Powhatan for the first time in his life had a bedstead and a wash basin and a red gown, he thought himself so important that he would not sell corn to the settlers, who were in danger of starving. Captain Smith, however, showed him some blue glass beads, pretending that he could not sell them because they were made of some substance like the sky, and were to be worn only by the greatest princes. Powhatan became half crazy to get these precious jewels, and Smith brought a large boat-load of corn for a pound or two of beads.