The Victory at Yorktown and Washington as President

In large histories you will read of the many battles of the Revolution, and of the sad sufferings of Washington's soldiers, who were sometimes obliged to march barefoot, leaving tracks of blood on the frozen ground. Sometimes a soldier had to sit be the fire all night for want of a blanket to cover himself with. There were not many people in this country then, and they were mostly farmers, with but little money. They were fighting against England, which was the riches and strongest nation of that time. But after a while France sent men and ships to help the United States to finish the war.

The Revolutionary War lasted about seven years in all. A great victory which Washington gained when the war had lasted more than six years really finished the struggle.

General Cornwallis, the same whom Washington had fooled when he slipped out of Trenton, had won several victories over American troops in the Southern States. But he could not subdue the people, who were always ready to rise up again when he thought he had conquered them. Cornwallis marched northward from Carolina into Virginia, where he did a great deal of damage. Washington was in the North watching New York, which was occupied by English troops. He thought if he could capture for fine army which Cornwallis commanded in Virginia he might end the war. So, making every sign that he was going to attack New York, in order that soldiers might not be sent from New York to Cornwallis, he marched at the head of the American and French armies toward the South. On the way, he visited his home at Mount Vernon for the first time in six years.

Soon Cornwallis and his army were shut up in Yorktown, as Washington had once been shut up by Cornwallis in Trenton. But Cornwallis was not allowed to escape, as Washington did. Troops were sent all around him like a net, to keep him from getting away, while the French ships in Chesapeake Bay kept him from getting any help by way of the sea. The fighting about Yorktown was very severe, and the most splendid courage was shown by both the American and the French soldiers in charging the redoubts. The English fought with the greatest stubbornness on their side. 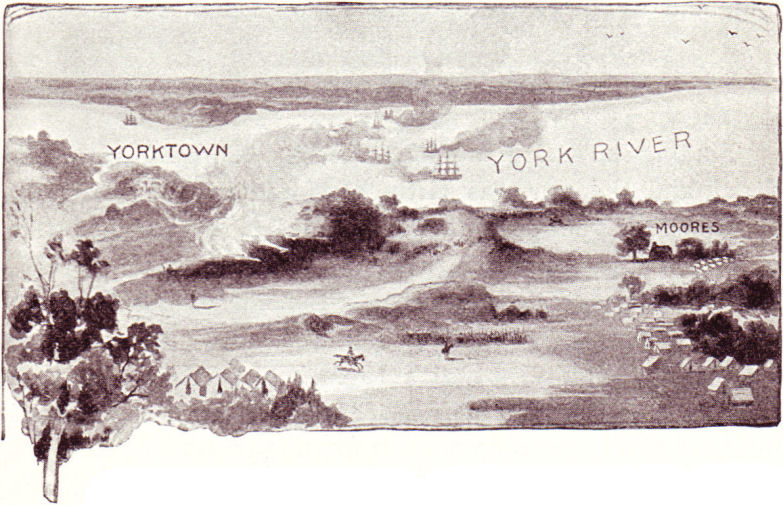 During the assaults Washington stood where he could see the bravery of the troops. One of his aids told him that it was a dangerous place for him to be in.

"If you think so you are at liberty to step back," said Washington.

Presently a musket ball struck a cannon near him and rolled at his feet. General Knox grasped Washington's arm, and said, "My dear general, we can not spare you yet."

"It is a spent ball. No harm is done," answered Washington.

Finding he could no longer resist, Cornwallis surrendered, and the war was virtually closed by the taking of Yorktown. The people of England had never liked this oppressive war, and the next year the English government felt obliged to acknowledge the independence of the United States.

Washington did not seek to make himself a king or a ruler over the country he had set free. When his work was over he gladly gave up command of the army, and went back to become, as he said, "a private citizen on the banks of the Potomac." While all the world was praising him, he went to work again taking care of his lands and crops at Mount Vernon, with the intention of never leaving his home for public life again.

But the people soon found that their government was not strong enough. Each State was almost a little country by itself, and the nation Washington and others had fought so hard to set free seemed about to fall into thirteen pieces. So a convention was called, to meet in Philadelphia in 1787, five years after the close of the Revolution. This convention, of which Washington was the president, made a new Constitution, which should bind all the States together into one country, under the rule of a President and Congress.

When the new Constitution had been adopted it became necessary to choose a President. Everybody wanted Washington to leave his fields and be the first President. He was elected by almost all of the votes cast.

At that time the capital of the country was New York. There were no railroads or telegraphs, so a messenger had to be sent from New York to Mount Vernon to tell General Washington that he had been chosen the first President of the United States. As the general traveled to New York the people turned out everywhere to do him honor. They rode by his carriage, and they welcomed him with public dinners in the towns. When he got to Trenton, out of which he had marched to escape from Cornwallis and fight the battle of Princeton, he found the bridge over which he had marched that night beautifully decorated. A triumphal arch had been erected by the women of Trenton, and, as the President passed beneath it, girls dressed in white sang a song of victory, and strewed flowers before him.

When he reached Elizabethtown Point there was in waiting for him a handsome large barge. In this he was rowed by thirteen master pilots dressed in white, and six other barges kept him company. The whole city of New York welcomed him with every possible honor. On the 30th of April, 1789, he took the oath of office, in the presence of a great throng of people.

Washington was again elected President in 1792. He refused to be elected a third time, and, after publishing a farewell address to the country, he left the presidency in 1797. He died at Mount Vernon in 1799.