My Father Meets Some Tigers

T HE river was very wide and muddy, and the jungle was very gloomy and dense. The trees grew close to each other, and what room there was between them was taken up by great high ferns with sticky leaves. My father hated to leave the beach, but he decided to start along the river bank where at least the jungle wasn't quite so thick. He ate three tangerines, making sure to keep all the peels this time, and put on his rubber boots. 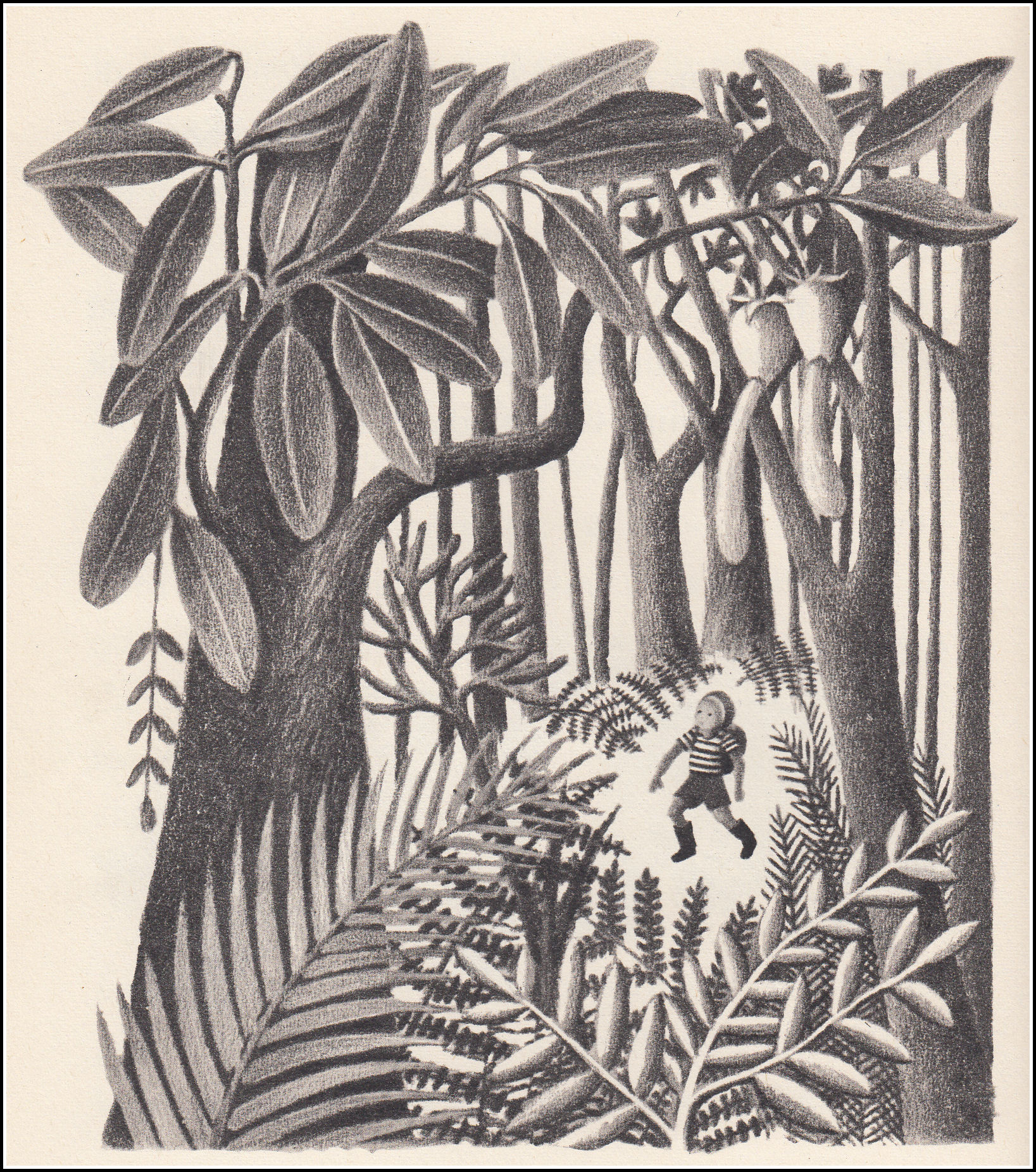 My father tried to follow the river bank but it was very swampy, and as he went farther the swamp became deeper. When it was almost as deep as his boot tops he got stuck in the oozy, mucky mud. My father tugged and tugged, and nearly pulled his boots right off, but at last he managed to wade to a drier place. Here the jungle was so thick that he could hardly see where the river was. He unpacked his compass and figured out the direction he should walk in order to stay near the river. But he didn't know that the river made a very sharp curve away from him just a little way beyond, and so as he walked straight ahead he was getting farther and farther away from the river.

It was very hard to walk in the jungle. The sticky leaves of the ferns caught at my father's hair, and he kept tripping over roots and rotten logs. Sometimes the trees were clumped so closely together that he couldn't squeeze between them and had to walk a long way around.

He began to hear whispery noises, but he couldn't see any animals anywhere. The deeper into the jungle he went the surer he was that something was following him, and then he thought he heard whispery noises on both sides of him as well as behind. He tried to run, but he tripped over more roots, and the noises only came nearer. Once or twice he thought he heard something laughing at him.

At last he came out into a clearing and ran right into the middle of it so that he could see anything that might try to attack him. Was he surprised when he looked and saw fourteen green eyes coming out of the jungle all around the clearing, and when the green eyes turned into seven tigers! The tigers walked around him in a big circle, looking hungrier all the time, and then they sat down and began to talk.

"I suppose you thought we didn't know you were trespassing in our jungle!"

Then the next tiger spoke. "I suppose you're going to say you didn't know it was our jungle!"

"Did you know that not one explorer has ever left this island alive?" said the third tiger.

My father thought of the cat and knew this wasn't true. But of course he had too much sense to say so. One doesn't contradict a hungry tiger.

The tigers went on talking in turn. "You're our first little boy, you know. I'm curious to know if you're especially tender."

"Maybe you think we have regular meal-times, but we don't. We just eat whenever we're feeling hungry," said the fifth tiger.

"And we're very hungry right now. In fact, I can hardly wait," said the sixth. 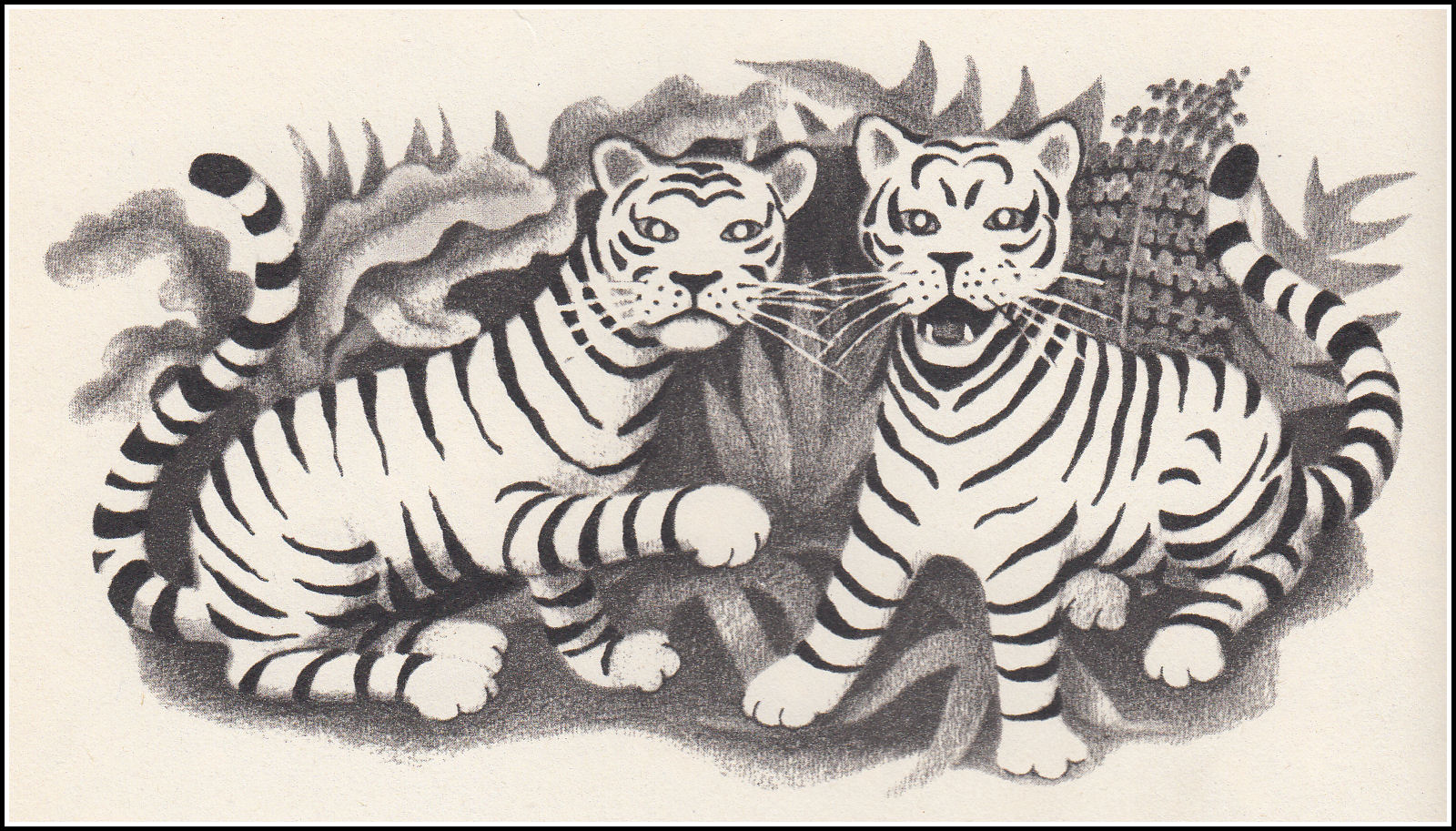 And then all the tigers said together in a loud roar, "Let's begin right now!" and they moved in closer.

My father looked at those seven hungry tigers, and then he had an idea. He quickly opened his knapsack and took out the chewing gum. The cat had told him that tigers were especially fond of chewing gum, which was very scarce on the island. So he threw them each a piece but they only growled. "As fond as we are of chewing gum, we're sure we'd like you even better!" and they moved so close that he could feel them breathing on his face.

"But this is very special chewing gum," said my father. "If you keep on chewing it long enough it will turn green, and then if you plant it, it will grow more chewing gum, and the sooner you start chewing the sooner you'll have more."

The tigers said, "Why, you don't say! Isn't that fine!" And as each one wanted to be the first to plant the chewing gum, they all unwrapped their pieces and began chewing as hard as they could. Every once in a while one tiger would look into another's mouth and say, "Nope, it's not done yet," until finally they were all so busy looking into each other's mouths to make sure that no one was getting ahead that they forgot all about my father. 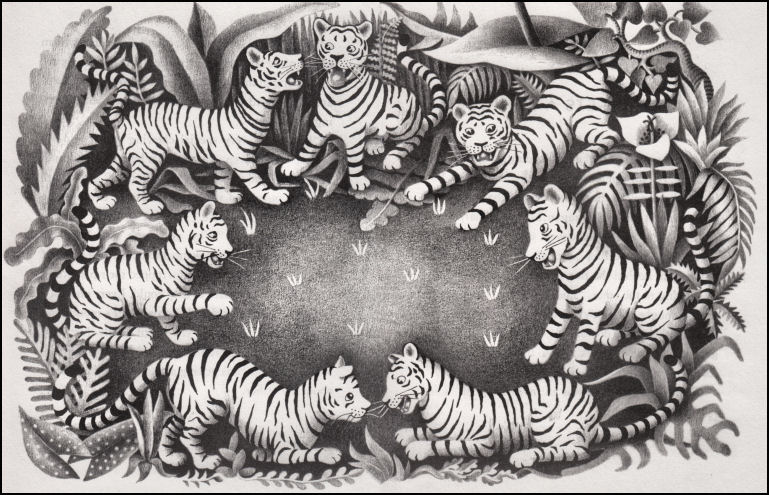