I N times of yore, when wishes were both heard and granted, lived a king whose daughters were all beautiful, but the youngest was so lovely that the sun himself, who has seen so much, wondered at her beauty every time he looked in her face. Now, near the King's castle was a large dark forest; and in the forest, under an old linden tree, was a deep well. When the day was very hot, the King's daughter used to go to the wood and seat herself at the edge of the cool well; and when she became wearied she would take a golden ball, throw it up in the air, and catch it again. This was her favorite amusement. Once it happened that her golden ball, instead of falling back into the little hand that she stretched out for it, dropped on the ground and immediately rolled away into the water. 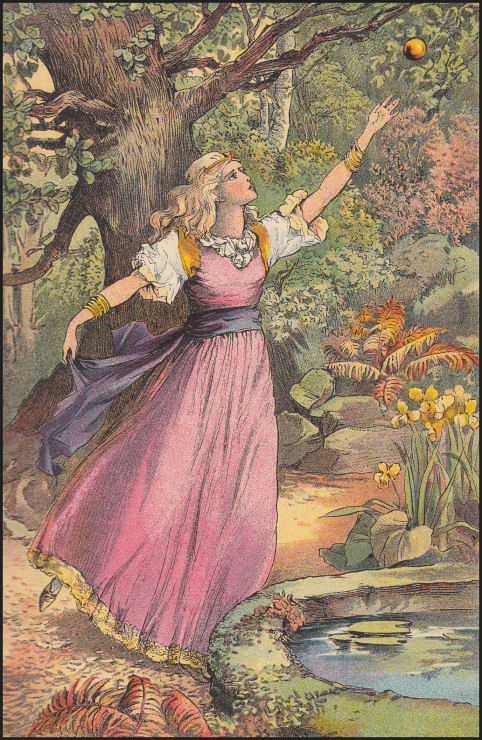 The King's daughter followed it with her eyes, but the ball had vanished and the well was so deep that no one could see down to the bottom. Then she began to weep, wept louder and louder every minute, and could not console herself at all.

While she was thus lamenting, some one called to her: "What is the matter with you, King's daughter? You weep so bitterly that you would touch the heart of a stone."

She looked around to see whence the voice came, and saw a frog stretching his thick, ugly head out of the water.

"Ah, it is you, old water paddler!" said she. "I am crying for my golden ball, which has fallen into the well."

"Be content," answered the Frog, "I dare say I can give you some good advice; but what will you give me if I bring back your plaything to you?"

"Whatever you like, dear Frog," said she, "my clothes, my pearls, and jewels, even the golden crown I wear."

"Oh, yes!" said she; "I promise you everything, if you will only bring me back my golden ball."

She thought to herself meanwhile: "What nonsense the silly Frog talks! He sits in the water with the other frogs and croaks, and cannot be anybody's playfellow."

But the Frog, as soon as he had received the promise, dipped its head under the water and sank down. In a little while up he came again with the ball in his mouth, and threw it on the grass. The King's daughter was overjoyed when she beheld her pretty plaything and picked it up and ran away with it. "Wait! wait!" cried the Frog; "take me with you. I cannot run as fast as you." 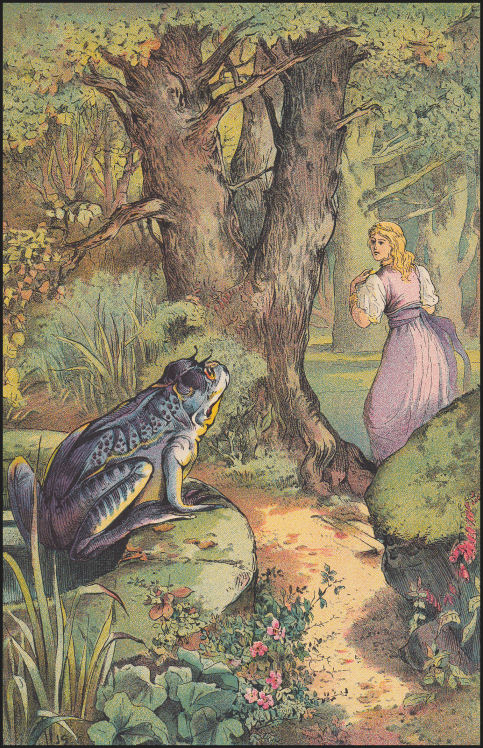 Alas! of what use was it that he croaked after her as loud as he could. She would not listen to him, but hastened home, and soon forgot the poor Frog, who was obliged to plunge again to the bottom of his well.

The next day, when she was sitting at dinner with the King and all the courtiers, eating from her little golden plate, there came a sound of something creeping up the marble staircase—splish, splash; and when it had reached the top, it knocked the door and cried: "Youngest King's daughter, open to me."

She ran, wishing to see who was outside; but when she opened the door, and there sat the Frog, she flung it hastily to again, and sat down at table, feeling very, very uncomfortable. The King saw that her heart was beating violently, and said; "Well, my child, why are you afraid? Is a giant standing outside the door to carry you off?"

"Oh, no!" answered she, "it is no giant, but a nasty frog, who yesterday, when I was playing in the wood near the well, fetched my golden ball out of the water. For this I promised him he should be my companion, but I never thought he could come out of his well. Now he is at the door, and wants to come in."

Again, the second time there was a knock, and a voice cried:

Then said the King: "What you promised you must perform. Go and open the door."

She went and opened the door; the Frog hopped in, always following and following her till he came up to her chair. There he sat and cried out: "Lift me up to you on the table." 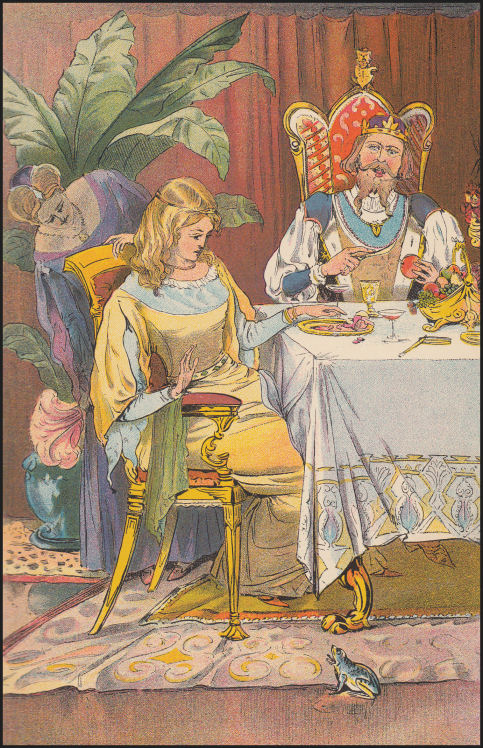 She refused, till the King, her father commanded her to do it. When the Frog was on the table he said: "Now push your little golden plate nearer to me that we may eat together." She did as he desired, but one could easily see that she did it unwillingly. The Frog seemed to enjoy his dinner very much, but every morsel she ate stuck in the throat of the poor little Princess.

Then said the Frog: "I have eaten enough, and am tired; carry me to your little room, and make your little silken bed smooth, and we will lay ourselves down to sleep together."

At this the daughter of the King began to weep, for she was afraid of the cold frog, who wanted to sleep in her pretty clean bed.

But the King looked angrily at her, and said again: "What you have promised you must perform. The Frog is your companion."

It was no use to complain; whether she liked it or not, she was obliged to take the Frog with her up to her little bed. So she picked him up with two fingers, hating him bitterly the while, and carried him upstairs. But when she got into bed, instead of lifting him up to her, she threw him with all her strength against the wall, saying: "Now, you nasty Frog, there will be an end of you!" 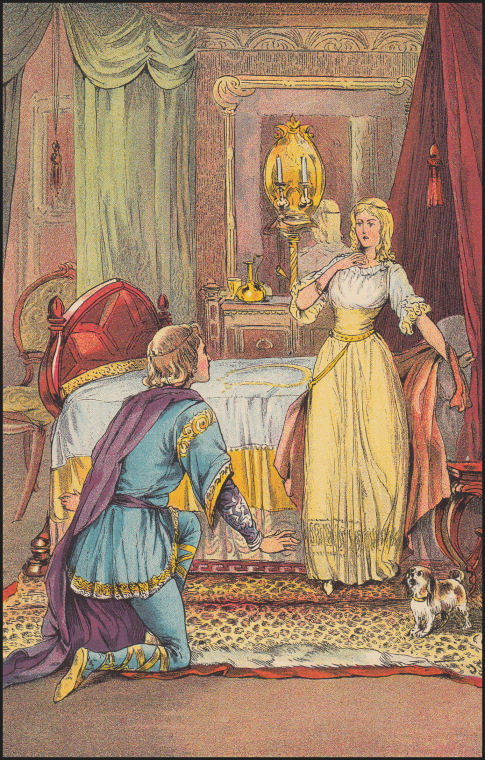 But what fell down from the wall was not a dead frog, but a living young prince, with beautiful and loving eyes, who at once became, by her own promise and her father's will, her dear companion and husband. He told her how he had been cursed by a wicked sorceress, and that no one but the King's youngest daughter could release him from his enchantment and take him out of the well.

The next day a carriage drove up to the palace gates with eight white horses, having white feathers on their heads and golden reins. 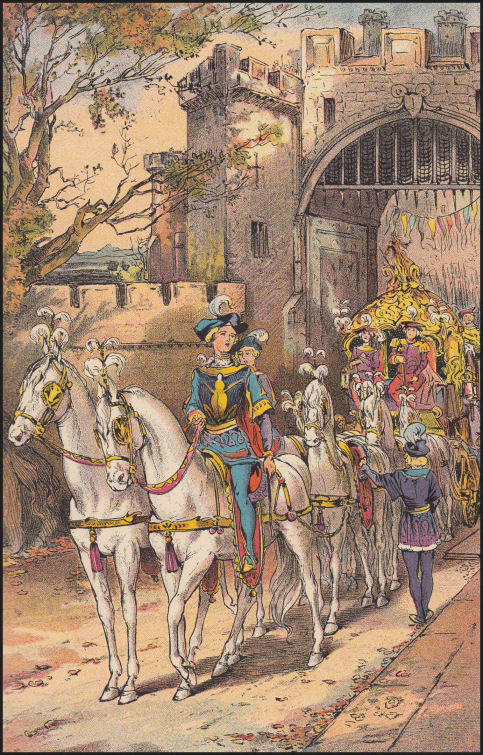 Behind it stood the servant of the young Prince, called the This had been so grieved when his master was changed into a frog, that he had been compelled to have three iron bands fastened around his heart, lest it should break. Now the carriage came to convey the Prince to his kingdom, so the lifted in the bride and bridegroom, and mounted behind, full of joy at his lord's release. But when they had gone a short distance, the Prince heard behind him a noise as if something was breaking. He turned around and cried out: "Henry, the carriage is breaking!"

But Henry replied: "No, sir, it is not the carriage, but one of the bands from my heart with which I was forced to bind it up, or it would have broken with grief while you sat as a frog at the bottom of the well."

Twice again this happened, and the Prince always thought the carriage was breaking; but it was only the bands breaking off from the heart of the out of joy that his lord the was a frog no more.