O NCE upon a time there lived a gentleman who owned fine lands and houses, and he very much wanted to have a son to be heir to them. So when his wife brought him a daughter, though she was bonny as bonny could be, he cared nought for her, and said:

"Let me never see her face."

So she grew up to be a beautiful maiden, though her father never set eyes on her till she was fifteen years old and was ready to be married. 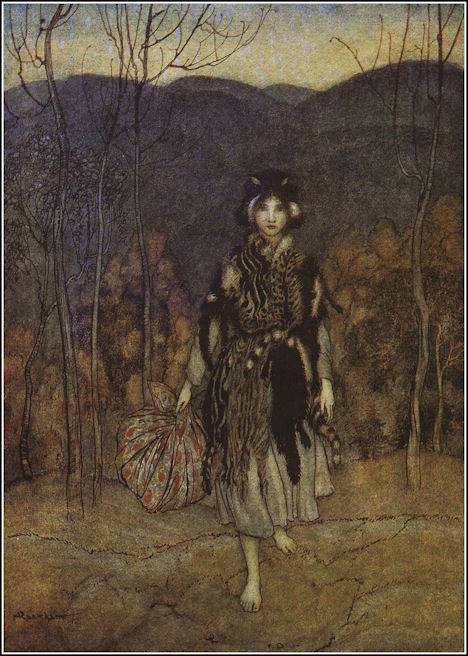 Well, soon after that it happened that the young lord of the castle came home, and there was to be a grand ball in honour of the occasion. And when they were speaking about it among the servants, "Dear me, Mrs. Cook," said Catskin, "how much I should like to go!"

"What! You dirty impudent slut," said the cook, "you go among all the fine lords and ladies with your filthy catskin? A fine figure you'd cut!" and with that she took a basin of water and dashed it into Catskin's face. But Catskin only shook her ears and said nothing.

Now when the day of the ball arrived, Catskin slipped out of the house and went to the edge of the forest where she had hidden her dresses. Then she bathed herself in a crystal waterfall, and put on her coat of silver cloth, and hastened away to the ball. As soon as she entered all were overcome by her beauty and grace, while the young lord at once lost his heart to her. He asked her to be his partner for the first dance; and he would dance with none other the livelong night.

When it came to parting time, the young lord said, "Pray tell me, fair maid, where you live?"

But Catskin curtsied and said:

Then she flew from the castle and donned her catskin robe again, and slipped into the scullery, unbeknown to the cook.

The young lord went the very next day and searched for the sign of the "Basin of Water"; but he could not find it. So he went to his mother, the lady of the castle, and declared he would wed none other but the lady of the silver dress, and would never rest till he had found her. So another ball was soon arranged in hopes that the beautiful maid would appear again.

So Catskin said to the cook, "Oh, how I should like to go!" Whereupon the cook screamed out in a rage, "What, you, you dirty, impudent slut! You would cut a fine figure among all the fine lords and ladies." And with that she up with a ladle and broke it across Catskin's back. But Catskin only shook her ears, and ran off to the forest, where, first of all, she bathed, and then she put on her coat of beaten gold, and off she went to the ballroom.

As soon as she entered all eyes were upon her; and the young lord at once recognized her as the lady of the "Basin of Water," claimed her hand for the first dance, and did not leave her till the last. When that came, he again asked her where she lived. But all that she would say was:

and with that she curtsied and flew from the ball, off with her golden robe, on with her catskin, and into the scullery without the cook's knowing.

Next day, when the young lord could not find where the sign of the "Broken Ladle" was, he begged his mother to have another grand ball, so that he might meet the beautiful maid once more.

Then Catskin said to the cook, "Oh, how I wish I could go to the ball!" Whereupon the cook called out: "A fine figure you'd cut!" and broke the skimmer across her head. But Catskin only shook her ears, and went off to the forest, where she first bathed in the crystal spring, and then donned her coat of feathers, and so off to the ballroom.

When she entered every one was surprised at so beautiful a face and form dressed in so rich and rare a dress; but the young lord at once recognized his beautiful sweetheart, and would dance with none but her the whole evening. When the ball came to an end he pressed her to tell him where she lived, but all she would answer was:

and with that she curtsied, and was off to the forest. But this time the young lord followed her, and watched her change her fine dress of feathers for her catskin dress, and then he knew her for his own scullery maid.

Next day he went to his mother, and told her that he wished to marry the scullery maid, Catskin.

"Never," said the lady of the castle, "never so long as I live."

Well, the young lord was so grieved that he took to his bed and was very ill indeed. The doctor tried to cure him, but he would not take any medicine unless from the hands of Catskin. At last the doctor went to the mother, and said that her son would die if she did not consent to his marriage with Catskin; so she had to give way. Then she summoned Catskin to her, and Catskin put on her coat of beaten gold before she went to see the lady; and she, of course, was overcome at once, and was only too glad to wed her son to so beautiful a maid.

So they were married, and after a time a little son was born to them, and grew up a fine little lad. Now one day, when he was about four years old, a beggar woman came to the door, and Lady Catskin gave some money to the little lord and told him to go and give it to the beggar woman. So he went and gave it, putting it into the hand of the woman's baby child; and the child leant forward and kissed the little lord.

Now the wicked old cook (who had never been sent away, because Catskin was too kind-hearted) was looking on, and she said, "See how beggars' brats take to one another!"

This insult hurt Catskin dreadfully: and she went to her husband, the young lord, and told him all about her father, and begged he would go and find out what had become of her parents. So they set out in the lord's grand coach, and travelled through the forest till they came to the house of Catskin's father. Then they put up at an inn near, and Catskin stopped there, while her husband went to see if her father would own she was his daughter.

Now her father had never had any other child, and his wife had died; so he was all alone in the world, and sat moping and miserable. When the young lord came in he hardly looked up, he was so miserable. Then Catskin's husband drew a chair close up to him, and asked him, "Pray, sir, had you not once a young daughter whom you would never see or own?"

And the miserable man said with tears, "It is true; I am a hardened sinner. But I would give all my worldly goods if I could but see her once before I die."

Then the young lord told him what had happened to Catskin, and took him to the inn, and afterwards brought his father-in-law to his own castle, where they lived happy ever afterwards.