T HERE was once a merchant who was so rich that he could pave the whole street with gold and almost have enough left for a little lane. But he did not do that; he knew how to employ his money differently. When he spent a shilling he got back a crown, such a clever merchant was he; and this continued till he died.

His son now got all this money; and he lived merrily, going to the masquerade every evening, making kites out of dollar notes, and playing at ducks and drakes on the sea-coast with gold pieces instead of pebbles. In this way the money might soon be spent, and indeed it was so. At last he had no more than four shillings left, and no clothes to wear but a pair of slippers and an old dressing-gown. Now his friends did not trouble themselves any more about him, as they could not walk with him in the street; but one of them, who was good-natured, sent him an old trunk, with the remark, "Pack up!" Yes, that was all very well, but he had nothing to pack, therefore he seated himself in the trunk.

That was a wonderful trunk. So soon as any one pressed the lock the trunk could fly. He pressed, and, whir!  away flew the trunk with him through the chimney and over the clouds, farther and farther away. 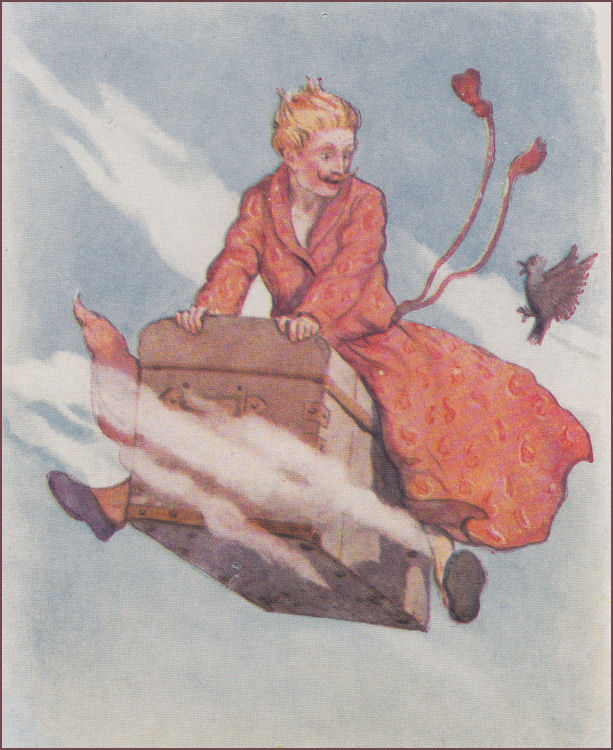 But as often as the bottom of the trunk cracked a little he was in great fear lest it might go to pieces, and then he would have flung a fine somersault. In that way he came to the land of the Turks. He hid the trunk in a wood under some dry leaves, and then went into the town. He could do that very well, for among the Turks all the people went about dressed like himself, in dressing-gown and slippers. Then he met a nurse with a little child.

"Here, you Turkish nurse," he began, "what kind of a great castle is that close by the town, in which the windows are so high up?"

"There dwells the Sultan's daughter," replied she. "It is prophesied that she will be very unhappy respecting a lover; and therefore nobody may go near her unless the Sultan and Sultana are there, too."

"Thank you!" said the Merchant's Son; and he went out into the forest, seated himself in his trunk, flew on the roof, and crept through the window into the Princess's room.

She was lying asleep on the sofa, and she was so beautiful that the Merchant's Son was compelled to kiss her. Then she awoke, and was startled very much; but he said he was a Turkish angel who had come down to her through the air, and that pleased her. 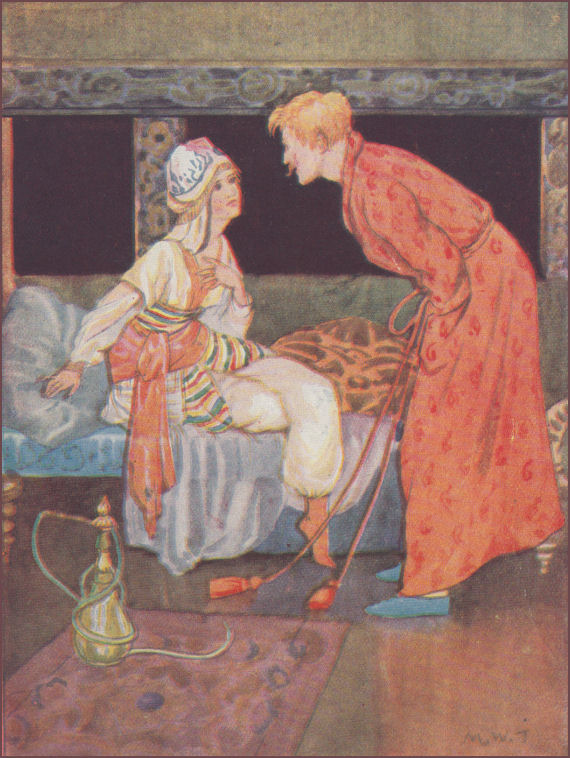 Yes, those were fine histories! Then he asked the Princess if she would marry him, and she said, "Yes," directly.

"But you must come here on Saturday," said she. "Then the Sultan and Sultana will be here to tea. They will be very proud that I am to marry a Turkish angel. But take care that you know a very pretty story, for both my parents are very fond indeed of stories. My mother likes them high-flown and moral, but my father likes them merry, so that one can laugh."

"Yes, I shall bring no marriage gift but a story," said he; and so they parted. But the Princess gave him a saber, the sheath embroidered with gold pieces, and that was very useful to him.

Now he flew away, bought a new dressing-gown, and sat in the forest and made up a story; it was to be ready by Saturday, and that was not an easy thing.

By the time he had finished it Saturday had come. The Sultan and his wife and all the court were at the Princess's to tea. He was received graciously.

"Will you relate us a story?" said the Sultana; "one that is deep and edifying."

"Yes, but one that we can laugh at," said the Sultan.

"Certainly," he replied; and so began. 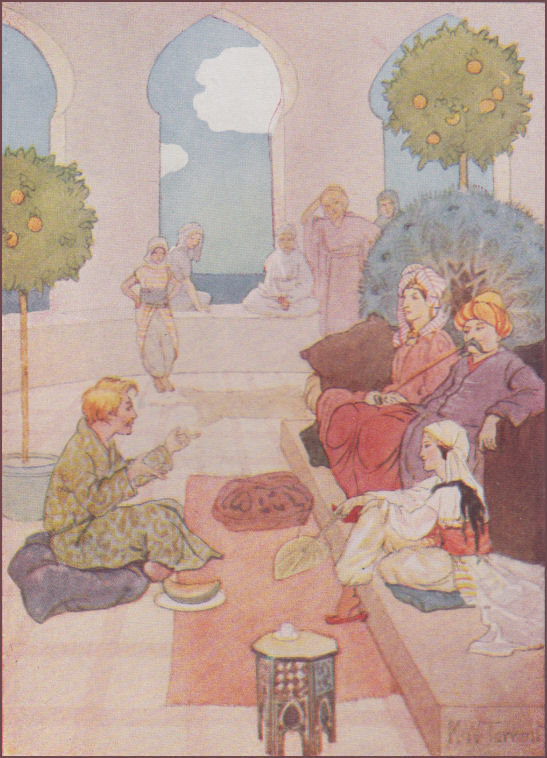 "There was once a bundle of Matches, and these Matches were particularly proud of their high descent. Their genealogical tree—that is to say, the great fir-tree of which each of them was a little splinter—had been a great old tree out in the forest. The Matches now lay between a Tinder-box and an old Iron Pot; and they were telling about the days of their youth. 'Yes, when we were upon the green boughs,' they said, 'then we were really on the green boughs! Every morning and evening there was diamond tea for us—I mean dew; we had sunshine all day long whenever the sun shone, and all the little birds had to tell stories. We could see very well that we were rich, for the other trees were only dressed out in summer, while our family had the means to wear green dresses in the winter as well. But then the wood-cutter came, like a great revolution, and our family was broken up. The head of the family got an appointment as mainmast in a first-rate ship which could sail round the world if necessary; the other branches went to other places, and now we have the office of kindling a light for the vulgar herd. That's how we grand people came to be in the kitchen.'

fate was of a different kind,' said the Iron Pot which stood next to the Matches. 'From the beginning, ever since I came into the world, there has been a great deal of scouring and cooking done in me. I look after the practical part, and am the first here in the house. My only pleasure is to sit in my place after dinner, very clean and neat, and to carry on a sensible conversation with my comrades. But except the Water-pot, which is sometimes taken down into the courtyard, we always live within our four walls. Our only newsmonger is the Market-basket; but he speaks very uneasily about the government and the people. Yes, the other day there was an old pot that fell down, from fright, and burst. He's liberal, I can tell you!'  'Now you're talking too much,' the Tinder-box interrupted, and the steel struck against the flint, so that sparks flew out. 'Shall we not have a merry evening?'

let us talk about who is the grandest,' said the Matches.

I don't like to talk about myself,' retorted the Pot. 'Let us get up an evening entertainment. I will begin. I will tell a story from real life, something that every one has experienced, so that we can easily imagine the situation and take pleasure in it. On the Baltic, by the Danish

a pretty beginning!' cried all the Plates. 'That will be a story we shall like.'

it happened to me in my youth when I lived in a family where the furniture was polished, the floors scoured, and new curtains were put up every fortnight.'

an interesting way you have of telling a story!' said the Carpet-broom. 'One can tell directly that a man is speaking who has been in woman's society. There's something pure runs through it.'

"And the Pot went on telling his story, and the end was as good as the beginning.

"All the Plates rattled with joy, and the Carpet-broom brought some green parsley out of the dust-hole and put it like a wreath on the Pot, for he knew that it would vex the others. 'If I crown him to-day,' he thought, 'he will crown me to-morrow.'

I'll dance,' said the Fire-tongs; and he danced. Preserve us! how that implement could lift up one leg! The old Chair-cushion burst to see it. 'Shall I be crowned, too?' thought the Tongs; and indeed a wreath was awarded.

only common people, after all!' thought the Matches.

"Now the Tea-urn was to sing; but she said she had taken cold and could not sing unless she felt boiling within. But that was only affectation; she did not want to sing except when she was in the parlor with the grand people.

"In the window sat an old Quill Pen with which the maid generally wrote; there was nothing remarkable about this Pen except that it had been dipped too deep into the ink, but she was proud of that. 'If the Tea-urn won't sing,' she said, 'she may leave it alone. Outside hangs a nightingale in a cage, and he can sing. He hasn't had any education, but this evening we'll say nothing about that.'

think it very wrong,' said the Tea-kettle—he was the kitchen singer and half-brother to the Tea-urn—'that that rich and foreign bird should be listened to! Is that patriotic? Let the Market-basket decide.'

am vexed,' said the Market-basket. 'No one can imagine how much I am secretly vexed. Is that a proper way of spending the evening? Would it not be more sensible to put the house in order? Let each one go to his own place, and I will arrange the whole game. That would be quite another thing.'

let us make a disturbance,' cried they all. Then the door opened and the maid came in, and they all stood still; not one stirred. But there was not one pot among them who did not know what he could do and how grand he was. 'Yes, if I had liked,' each one thought, 'it might have been a very merry evening.'

"The servant-girl took the Matches and lighted the fire with them. Mercy! how they sputtered and burst out into flame! 'Now every one can see,' thought they, 'that we are the first. How we shine! what a light!'—and they burned out."

"That was a capital story," said the Sultana. "I feel myself quite carried away to the kitchen, to the Matches. Yes, now thou shalt marry our daughter."

"Yes, certainly," said the Sultan, "thou shalt marry our daughter on Monday."

And they called him thou  because he was to belong to the family.

The wedding was decided on, and on the evening before it the whole city was illuminated. Biscuits and cakes were thrown among the people, the street-boys stood on their toes, called out "Hurrah!" and whistled on their fingers. It was uncommonly splendid.

"Yes, I shall have to give something as a treat," thought the Merchant's Son. So he bought rockets and crackers, and every imaginable sort of firework, put them all into his trunk, and flew up into the air.

"Crack!" how they went, and how they went off! All the Turks hopped up with such a start that their slippers flew about their ears; such a meteor they had never yet seen. Now they could understand that it must be a Turkish angel who was going to marry the Princess.

What stories people tell! Every one whom he asked about it had seen it in a separate way; but one and all thought it fine.

"I saw the Turkish angel himself," said one. "He had eyes like glowing stars and a beard like foaming water."

"He flew up in a fiery mantle," said another; "the most lovely little cherub peeped forth from among the folds."

Yes, they were wonderful things that he heard; and on the following day he was to be married.

Now he went back to the forest to rest himself in his trunk. But what had become of that? A spark from the fireworks had set fire to it, and the trunk was burned to ashes. He could not fly any more, and could not get to his bride.

She stood all day on the roof waiting; and most likely she is waiting still. But he wanders through the world telling fairy tales; but they are not so merry as that one he told about the Matches.