It was in the days when cruel men killed and tortured those who loved our Blessed Lord that in the city of Rome, a little maid was born. Her father and mother were amongst the richest and noblest of the Roman people, and their little daughter, whom they called Cecilia, had everything she could possibly want. She lived in a splendid palace, with everything most beautiful around her, and she had a garden to play in, where the loveliest flowers grew. Her little white dress was embroidered with the finest gold, and her face was as fair as the flowers she loved.

But it was not only the outside that was beautiful, for the little maiden's heart was fairer than the fairest flowers, and whiter than her spotless robe.

There were not many people who loved our Lord in those dark days. Any one who was known to be a Christian was made to suffer terrible tortures, and was even put to death.

But though Cecilia's father and mother knew this they still taught their little daughter to be a servant of Christ and to love Him above all things. For they knew that the love of Christ was better than life, and worth all the suffering that might come.

And as Cecilia grew into a stately maiden every one wondered at the grace and beauty that shone out of her face. And every one loved her because she loved every one. She was always ready and willing to help others, and she specially cared to be kind to the poor. In the folds of her gold embroidered dress she always carried a little book which she loved to read. It was the book of the Gospels, and the more she read and heard of Christ, the more she longed to grow like Him. She could not bear to think that she wore fine dresses, while He had been so poor and suffered so much. And so, underneath her soft, white robe she wore a harsh, coarse garment made of hair. And when it hurt and rubbed her sorely, the pain only made her glad, because she wore it for Christ's sake.

Some say the meaning of her name Cecilia is "Heaven's Lily." And that name certainly suited this little Roman maiden. For as God plants the lilies in the dark earth, and presently they grow up and lift their pure white cups to heaven, so Cecilia seemed to lift her heart above the sins and sorrows of the world, where God had planted her, and to turn her face ever heavenwards.

And the poor people whom she helped and cheered with her kind sympathy loved to look at her, for the peace of paradise shone in her eyes, and it seemed to bring heaven nearer to the poor souls.

As soon as Cecilia was old enough, it was arranged that she should marry a young Roman noble called Valerian, and this made her very unhappy. She had so hoped to belong only to Christ, and this Valerian was a pagan who knew nothing of the Lord whom she served. But she knew that her guardian angel would watch over her and keep her from all harm, and so she obeyed her father's and mother's wishes, and was married to the young Roman noble.

When Valerian had taken Cecilia home and all the guests had gone, and they were left alone together, she told him that, though she was married, she belonged first of all to Christ, and that her guardian angel, who never left her, would guard and protect her from all danger.

"Wilt thou not show me this angel, so that I may know that what thou sayest is true?" asked Valerian.

"Thou canst not see the heavenly messenger until thou hast learnt to know my Lord," answered Cecilia.

And as Valerian eagerly asked how he should learn to know this Christ, Cecilia told him to go along the great Appian Way, outside the walls of Rome, until he should meet some poor people who lived in the Campagna. And to them he should say:

"Cecilia bids you show me the way that I may find the old man, Urban the Good."

So Valerian started off and went the way Cecilia directed. And the people guided him as she had promised, until they came to a curious opening in the ground, down which they told him he must go if he wished to find Pope Urban.

This opening was the entrance to a strange underground place called the Catacombs.

There were miles and miles of dark passages cut out of the rock, with here and there a little dark room, and curious shelves hollowed out of the walls. It was here that many poor Christians lived, hiding themselves from those who would have put them to death. And the little shelves were where they buried the bodies of poor Christians who had died for Christ.

It was here that the old Pope, Urban the Good, lived, and he welcomed Valerian most gladly, knowing why he had come. He began at once to teach him all that he should know—how God was our Father, and Jesus Christ His Son, our Saviour. And as Valerian listened to the strange, wonderful words, the love of God shone into his heart, so that when the old man asked:

He answered with all his heart:

"All this I steadfastly believe."

Then Urban baptized Valerian, and by that sign the young Roman knew that he was indeed a Christian, a servant of Christ.

All the world looked different to Valerian as he walked back along the Appian Way to Rome. The flat, low fields of the Campagna, fading away into the ridges of the purple Apennines, seemed almost like the fields of paradise, and the song of the birds was like the voice of angels. He scarcely thought of the dangers and difficulties that were before him, or if he did it was only to feel glad that he might have anything to bear for his new Master.

And when he reached home, and went back to the room where he had left Cecilia, he found her there waiting for him, with a glad welcome in her eyes. And as they knelt together they heard a rustle of wings, and looking up they saw an angel bending over them, with a crown of lilies and roses in each hand. These he placed upon their heads, and to Valerian he said:

"Thou hast done well in allowing Cecilia to serve her Master, therefore ask what thou wilt and thy request shall be granted."

Then Valerian asked that his brother, whom he dearly loved, might also learn to know Christ. 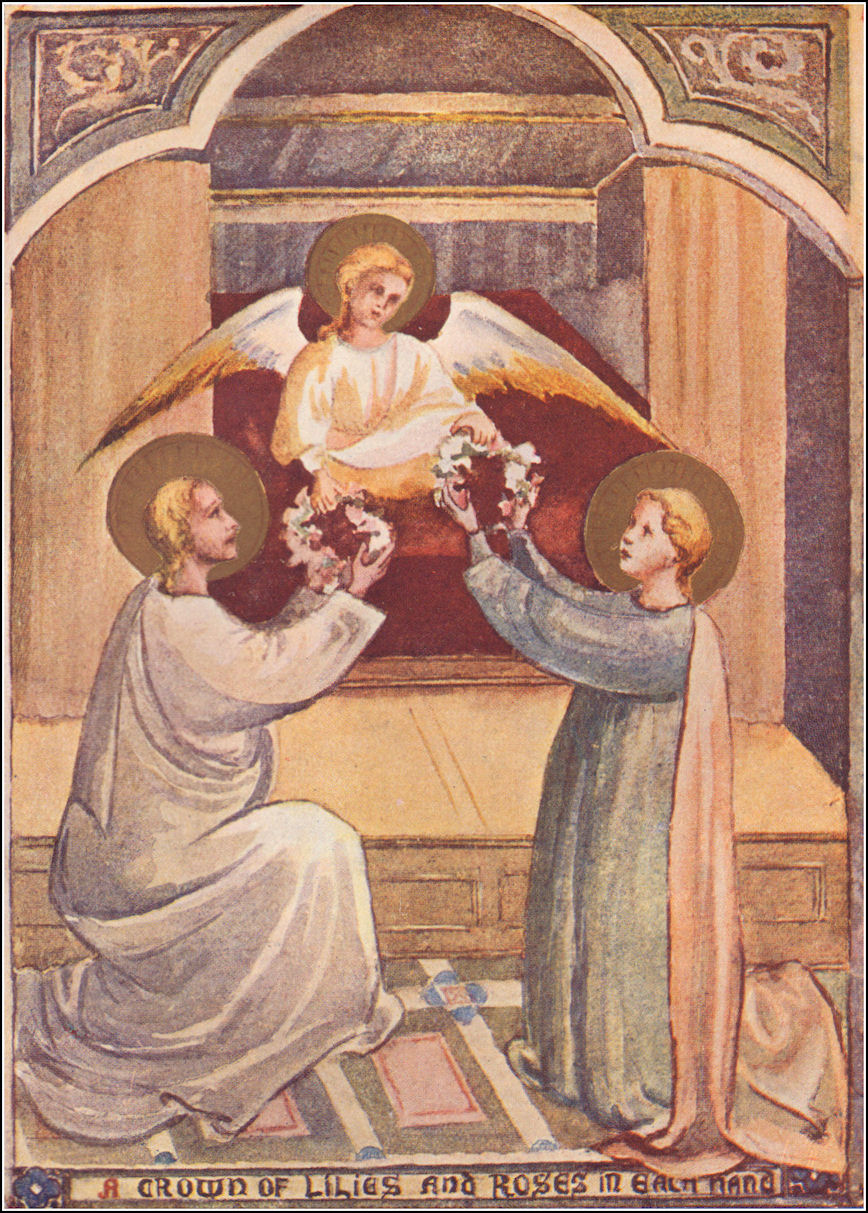 And just then the door opened, and the brother whom Valerian loved so much came in. He, of course, only saw Valerian and Cecilia, and could not see the angel, or even the wreaths of heavenly roses. But he looked round in astonishment and said:

"I see no flowers here, and yet the fragrance of roses and lilies is so sweet and strange, that it makes my very heart glad."

"We have two crowns here, which thou canst not see, because thou knowest not the Lord who sent them to us. But if thou wilt listen, and learn to know Him, then shalt thou see the heavenly flowers, whose fragrance has filled thy heart."

So Valerian and Cecilia told their brother what it meant to be a Christian. And after the good Urban had taught him also, he was baptized and became God's knight. Then he, too, saw the heavenly crowns and the face of the angel who guarded Heaven's Lily.

For a while the home of Valerian and Cecilia was like a paradise on earth. There was nothing but happiness there. Cecilia loved music above everything. Her voice was like a bird's, and she sang her hymns of praise and played so exquisitely, that it is said that even the angels came down to listen.

But before long it began to be known that Valerian and his brother helped the poor Christians, and the wicked governor of the city ordered them both to be seized and brought before him. He told them that there were but two ways before them: either they must deny that they were Christians, or they must be put to death.

But God's knights did not fear death, and they went out to meet it as if they were on their way to a great victory. And when the soldiers wondered, and asked them if it was not sad that they should lose their lives while they were still so young, they answered that what looked like loss on earth was gain in heaven—that they were but laying down their bodies as one puts off one's clothes to sleep at night. For the immortal soul could never die, but would live for ever.

So they knelt down, and the cruel blows were struck. But, looking up, the soldiers saw a great pathway of light shining down from heaven. And the souls of Valerian and his brother were led up by angel hands to the throne of God, there to receive the crowns of everlasting glory which they had won on earth.

And so Cecilia was left alone. But she did not spend her time grieving. Gathering the people and soldiers around her, she taught them about the Lord of Heaven, for whose sake Valerian and his brother had so gladly suffered death. And it was not long before she also trod the shining pathway up to heaven and met the ones she loved.

For the governor was not satisfied with the death of Valerian and his brother, but ordered Cecilia to be brought before him.

"What sort of a woman art thou, and what is thy name?" he asked.

"I am a Roman lady," she answered with grave dignity, "and among men I am known by the name of Cecilia. But"—and her voice rang out proudly as she looked fearlessly into those angry eyes—"my noblest name is Christian."

Then the enraged governor ordered that she should be taken to her house, and put to death in her bath. But the boiling water could not hurt her, and she was as cool as if she had bathed in a fresh spring. 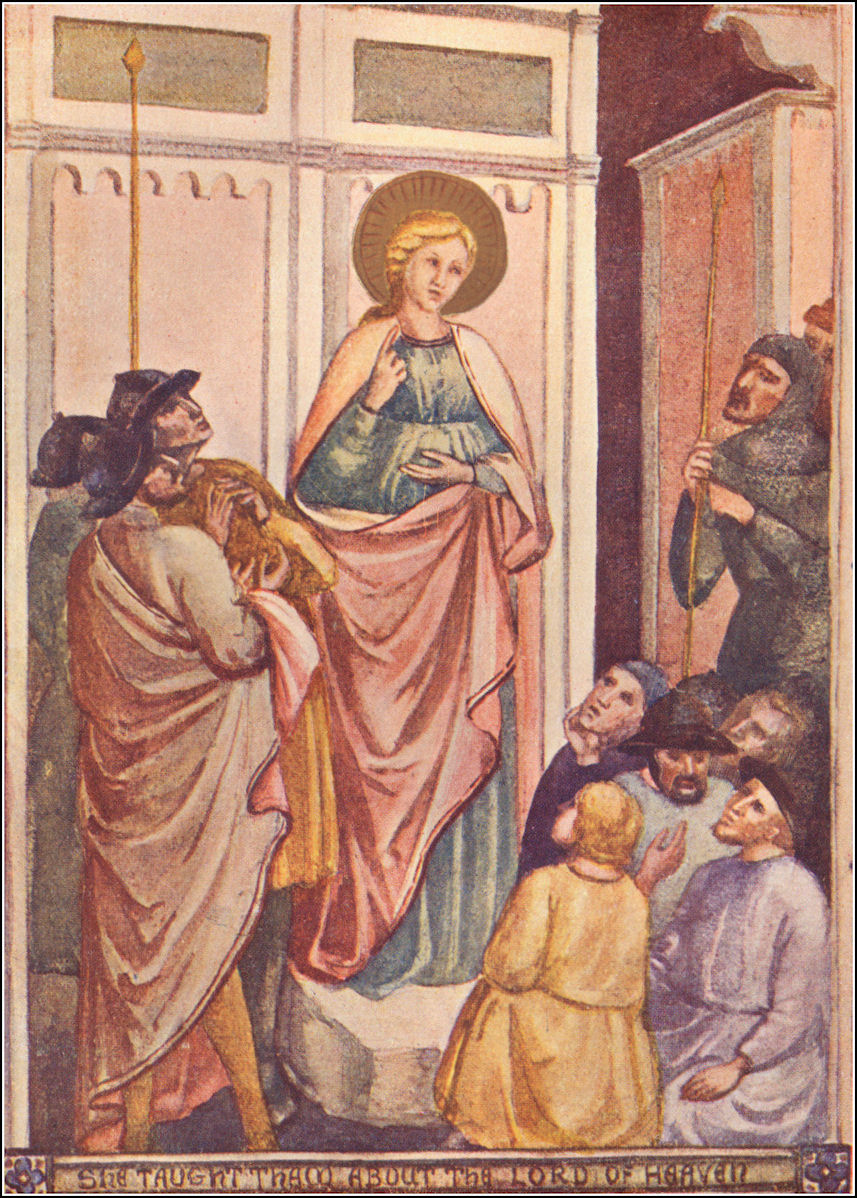 This made the governor more furious than ever, and he ordered that her head should be cut off.

But even after she had received three strokes from the sword she did not die, but lived for three days. And these days she spent in quietly putting her house in order and dividing her money among the poor, ever singing in her sweet voice the praises of God.

And so at the end of three days God's angel came and led Cecilia home, and all that was left of her on earth was her fair body, lying like a tired child asleep, with hands clasped, gently resting now that her work on earth was done.

And in Rome to-day there is a splendid church built over the place where Cecilia's house stood. Some day if you go there, you will see her little room and the bath in which the boiling water could not hurt her. You will see, too, a beautiful marble figure lying under the altar, and you will know exactly how Cecilia looked when she left her tired body lying there, and went up the shining path to God.