Once upon a time in the land of Brittany there lived a good king, whose name was Theonotus. He had married a princess who was as good as she was beautiful, and they had one little daughter, whom they called Ursula.

It was a very happy and prosperous country over which Theonotus ruled, for he was a Christian, and governed both wisely and well, and nowhere was happiness more certain to be found than in the royal palace where the king and queen and little Princess Ursula lived.

All went merrily until Ursula was fifteen years old, and then a great trouble came, for the queen, her mother, died. The poor king was heart-broken, and for a long time even Ursula could not comfort him. But with patient tenderness she tried to do for him all that her mother had done, and gradually he began to feel that he still had something to live for.

Her mother had taught Ursula with great care, and the little maid had loved her lessons, and so it came to pass that there was now no princess in all the world so learned as the Princess Ursula. It is said that she knew all that had happened since the beginning of the world, all about the stars and the winds, all the poetry that had ever been written, and every science that learned men had ever known.

But what was far better than all this learning was that the princess was humble and good. She never thought herself wiser than other people, and her chief pleasure was in doing kind things and helping others. Her father called her the light of his eyes, and his one fear was that she would some day marry and leave him alone.

And true it was that many princes wished to marry Ursula, for the fame of her beauty and of her learning had spread to far distant lands.

Now on the other side of the sea, not very far from Brittany, there was a great country called England. The people there were strong and powerful, but they had not yet learned to be Christians. The king of that land had an only son called Conon, who was as handsome as he was brave. And when his father heard of the fame of the Princess Ursula he made up his mind that she should be his son's wife. So he sent a great company of nobles and ambassadors to the court of Brittany to ask King Theonotus for the hand of the Princess Ursula.

That king received the messengers most courteously, but he was very much troubled and perplexed at the request. He did not want to part with Ursula, and he knew she did not wish to marry and leave him. And yet he scarcely dared offend the powerful King of England, who might be such a dangerous enemy.

So to gain time he told the messengers he would give them their answer next day, and then he shut himself up in his room and sorrowfully leaned his head upon his hand as he tried to think what was best to be done. But as he sat there thinking the door opened and Ursula came in.

"Why art thou so sad, my father?" she asked, "and what is it that troubleth thee so greatly?"

"I have this day received an offer for thy hand," answered her father sadly, "and the messengers are even now here, and because they come from the King of England I dare not refuse their request, and yet I know not what answer to give them when they return in the morning."

"If that is all, do not trouble thyself, dear father," answered Ursula; "I myself will answer the messengers and all will be well."

Then the princess left her father and went to her own room that she might consider what answer might be wisest to send. But the more she thought the more troubled she became, until at last she grew so weary that she took off her crown and placed it as usual at the foot of her bed and prepared to go to rest. Her little dog lay guarding her, and she slept calmly and peacefully until she dreamed a dream which seemed almost like a vision. For she thought she saw a bright light shining through the door and through the light an angel coming towards her, who spoke to her and said:— 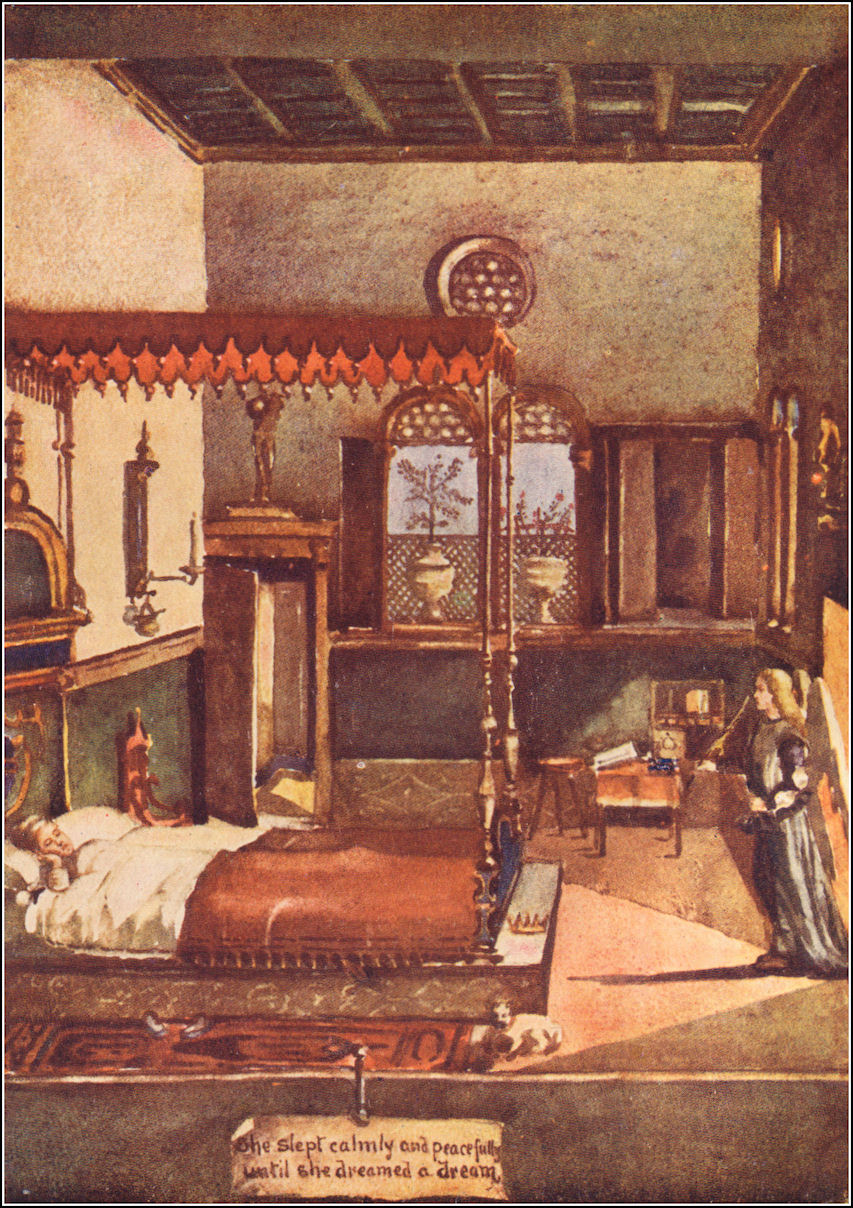 "Trouble not thyself, Ursula, for to-morrow thou shalt know what answer thou shalt give. God has need of thee to save many souls, and though this prince doth offer thee an earthly crown, God has an unfading crown of heavenly beauty laid up for thee, which thou shalt win through much suffering."

So next morning when the messengers came into the great hall to receive their answer, they saw the Princess Ursula herself sitting on the throne next to her father. She was so beautiful, and greeted them so graciously that they longed more than ever that their prince might win her for his bride.

And as they listened for the king to speak, it was Ursula's voice that fell on their ears. She began by sending her greeting to the King of England and to Prince Conon, his son, and bade the messengers say that the honour offered her was more than she deserved, but since their choice had fallen upon her, she on her side was ready to accept the prince as her promised husband, if he would agree to three conditions. "And first," went on Ursula, leaning forward and speaking very clearly and slowly, so that the foreign ambassadors might understand every word, "I would have the prince, your master, send to me ten of the noblest ladies of your land to be my companions and friends, and for each of these ladies and for myself a thousand maidens to wait upon us. Secondly, he must give me three years before the date of my marriage so that I and these noble ladies may have time to serve God by visiting the shrines of the saints in distant lands. And thirdly, I ask that the prince and all his court shall accept the true faith and be baptized Christians. For I cannot wed even so great and perfect a prince, if he be not as perfect a Christian."

Then Ursula stopped speaking, and the ambassadors bowed low before her beauty and wisdom and went to take her answer to their king.

Now Ursula did not make these conditions without a purpose, for in her heart she thought that surely the prince would not agree to such demands, and she would still be free. But even if he did all that she had asked, it would surely fulfil the purpose of her dream, and she would save these eleven thousand maidens and teach them to serve and honour God.

Ere long the ambassadors arrived safely in England, and went to report their mission to the king. They could not say enough about the perfections of this wonderful princess of Brittany. She was as fair and straight as a lily, her rippling hair was golden as the sunshine, and her eyes like shining stars. The pearls that decked her bodice were not as fair as the whiteness of her throat, and her walk and every gesture was so full of grace that it clearly showed she was born to be a queen. And if the outside was so fair, words failed them when they would describe her wisdom and learning, her good deeds and kind actions.

The king, as he listened to his nobles, felt that no conditions could be too hard that would secure such a princess for his son, and as for the prince himself his only desire was to have her wishes fulfilled as quickly as possible, so that he might set sail for Brittany and see with his own eyes this beautiful princess who had promised to be his bride.

So letters were sent north, south, east, and west, to France and Scotland and Cornwall, wherever there were vassals of England to be found, bidding all knights and nobles to send their daughters to court with their attendant maidens, the fairest and noblest of the land. All were to be arrayed in the finest and costliest raiment and most precious jewels, so that they might be deemed fit companions for the Princess Ursula, who was to wed Prince Conon, their liege lord.

Then the knights and nobles sent all their fairest maidens, and so eager were they to do as the king desired, that very soon ten of the noblest maidens, each with a thousand attendants, and another thousand for the Princess Ursula, were ready to start for the court of Brittany.

Never before was seen such a fair sight as when all these maidens went out to meet the Princess Ursula. But fairest of all was the princess herself as she stood to receive her guests. For the light of love shone in her eyes, and to each she gave a welcome as tender as if they had all been her own sisters. It seemed a glorious thing to think they were all to serve God together, and no longer to live the life of mere pleasure and vanity.

As may well be believed the fame of these fair maidens spread far and near, and all the nobles and barons crowded to the court to see the sight that all the world talked about. But Ursula and her maidens paid no heed to the gay courtiers, having other matters to think upon.

For when the soft spring weather was come, Ursula gathered all her companions together and led them to a green meadow outside the city, through which a clear stream flowed. The grass was starred with daisies and buttercups, and the sweet scent of the lime blossoms hung in the air, a fitting bower for those living flowers that gathered there that day.

In the midst of the meadow there was a throne, and there the princess sat, and with words of wonderful power she told her companions the story of God's love and of the coming of our Blessed Lord, and showed them what the beauty of a life lived for Him might be.

And the faces of the listening maidens shone with a glory that was more than earthly, as they with one accord promised to follow the Princess Ursula wherever she might lead, if only she would help them to live the blessed life so that they too might win the heavenly crown.

Then Ursula descended from her throne and talked with each of the maidens, and those who had not yet been baptized she led through the flowery meadow to the banks of the stream, and there a priest baptized them while the birds joined in the hymn of praise sung by the whole company.