D uring many centuries, if a man asked, "What can I do that will be most pleasing to God?" not only the priests but nearly all his friends would answer, "Make a pilgrimage to Jerusalem, to the place where our Lord suffered and was buried." To go from England or any part of Western Europe was a long journey, and often dangerous, but it was not expensive, for all Christians felt it a duty to give the pilgrims food and lodging. Jerusalem was in the hands of the Saracens. They were Mohammedans, but they had no objection to allowing pilgrims to visit the city, especially as the wealthier among them spent much money during their stay. Good Harun-al-Raschid even erected a Christian church and a building in which the pilgrims might lodge.


About the time that William the Conqueror took possession of England, the Seljukian Turks captured Jerusalem. Then it became a different matter to make a pilgrimage to the Holy City, for the pilgrims were robbed and tortured and sometimes put to death. The Emperor in the East and the popes, one after another, were most indignant. Finally Pope Urban II. determined that the church should be aroused to capture the Holy Land from the Turks. He had a powerful helper, a Frenchman known as Peter the Hermit. Peter had been on a pilgrimage to the Holy Land, and on his return he travelled about Europe in coarse woollen shirt and hermit's cloak, telling people everywhere of the cruelties of the Turks. At Clermont in France, Pope Urban went out into a wide-spreading plain and made an eloquent address to the thousands of Frenchmen who were gathered together. He told them that God had given their nation glory in arms, and that He wished them to use their power, not in fighting with one another, but in winning the city of Christ from the infidels. The multitude shouted, "God wills it! God wills it!" and it was not long before hundreds of thousands had fastened the red cross to their shoulders and had set out for Jerusalem. The Latin word for cross is crux, and from this the expedition was known as a crusade. The pope had urged that none should go unless they were able to bear arms, and that the rich should take soldiers with them; but people paid little attention to this advice.

The first company started under Peter the Hermit and a knight known as Walter the Penniless. Not all its members, however, were real pilgrims. Some went for gain, some to see the world, and some were mere robbers and thieves. Peter had no authority over them, and they did what they chose. While they were passing through Germany, the people were kind to them and gladly brought them food; but when they came to other countries, they were not treated so generously. Then they demanded food, often most insolently, and when it was refused, they stole it. They killed flocks and herds and even their owners. Of course the people avenged their wrongs with the sword. The pilgrims fought or fled as best they might. On arriving at Constantinople they were received kindly by the emperor and given food; but even there they stole from houses and gardens and churches. They pushed on toward Jerusalem, and soon were attacked and slaughtered by the Turks. 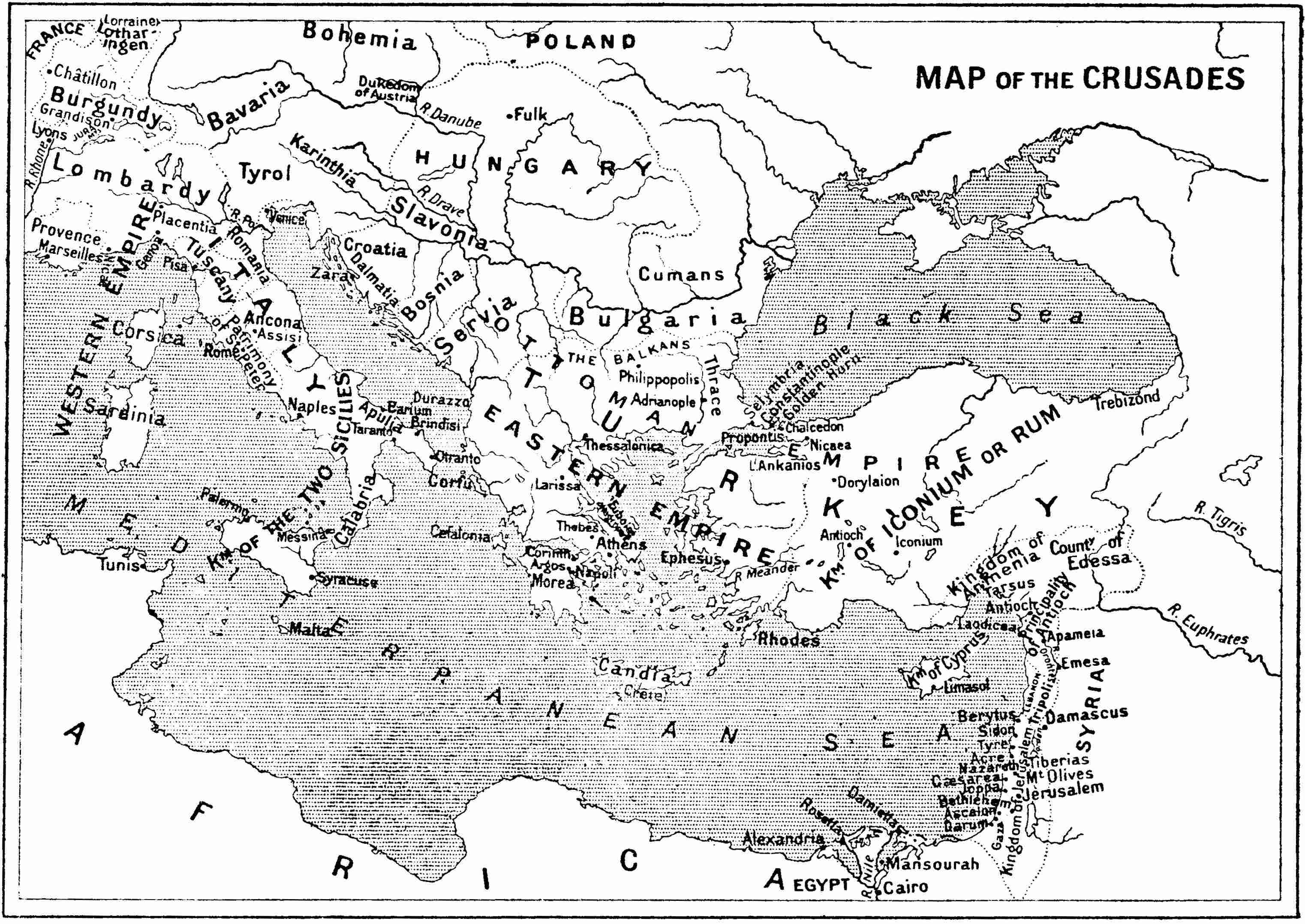 But there were hundreds of thousands of others making ready to join the crusade who were not wild, turbulent folk like the first company, but were far more earnest and serious. It is thought that at least 100,000 of these were knights. They came by different ways, but all met at Constantinople. Then they marched on into Asia Minor. They were in need of food and even of water. Thousands perished. The others were saved by some dogs that had followed them. These dogs deserted their masters, but finally came back to the camp. "See their muddy paws! They have found water!" cried the thirsty people. They followed the dogs' tracks and came to water. A pigeon, too, did them a good turn. One ruler had pretended to be friendly, but just after they had left his territory, they picked up in their camp a dead carrier pigeon, bearing a letter to the ruler of the next district, bidding him destroy "the accursed Christians."


So they went on; sometimes they captured a town; sometimes many of them died of famine or plague. At length they came in sight of the Holy City, and then all their troubles were forgotten. They cried, "Jerusalem! Jerusalem!" They fell upon their knees, they kissed one another with joy, they cast off their shoes, for had not the very soil become holy where the Lord had once walked? They threw themselves down upon it and kissed the ground. With shouts of "God wills it! God wills it!" they attacked the walls. After a savage combat, the city was captured. Then came a massacre of Saracens as brutal as any in history; for even the gallant knights had not yet learned that it is better to convert an enemy than to kill him.


The most valiant leader among the crusaders was Godfrey of Bouillon, and he was chosen king of what was called the Kingdom of Jerusalem. He was escorted to the Church of the Holy Sepulchre, and there he would have been crowned, but he said, "No, I cannot wear a crown of gold in the very city in which my Lord and Master wore a crown of thorns." He was willing to be called Defender of the Holy Sepulchre, but he would not take the title of king.


Godfrey and a few other knights remained in Jerusalem, and the rest of the pilgrims went to their homes. They had spent four years in this crusade; hundreds of thousands of Christians, and perhaps as many Saracens, had been slain; but the Holy City had been taken from the infidels, and there was great rejoicing.