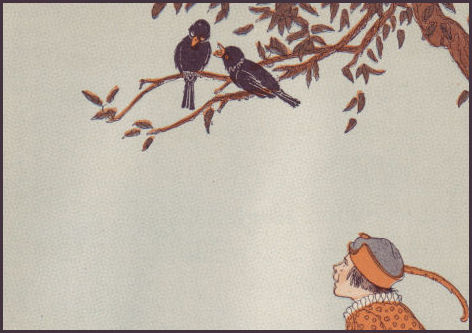 Many years ago, Mr. Blackbird and his wife sat on a high tree top.

They were swinging up and down, and Mr. Blackbird was singing.

Down under the tree a man was listening, too.

"That is Blackbird who is singing.

The King wants him caged

to sing in the palace.

I will set a trap for him

So Mr. Man set a trap for Blackbird.

He caught Mrs. Blackbird, but he didn't know the difference.

So he carried Mrs. Blackbird off to the palace.

There the King put her in a cage and hung it in the parlor.

Mr. Blackbird was in a great rage.

He found a sword and a drum and ran down the street, crying, "War, war, war!" 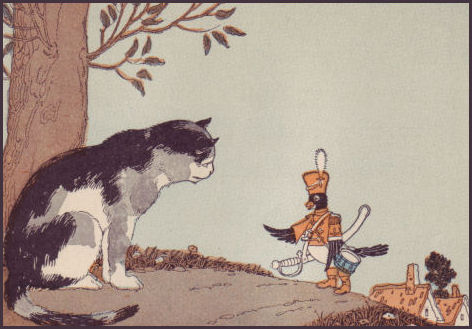 "Where are you going?" asked she.

"To fight the King," cried Blackbird.

and hung in his parlor,

and I am going to find her."

"Then jump into my ear," said Blackbird.

So the cat jumped into his ear and went to sleep.


Soon he met some ants.

"Where are you going, Mr. Blackbird?" cried they.

"To fight the King," said Blackbird.

and hung in his parlor."

"The King had hot water poured

We will fight him, too."

"Jump into my ear," said Blackbird.

So in jumped the ants, and on ran Blackbird, crying, "War, war, war!"


Soon he met a rope and a club.

"Where are you going, Mr. Blackbird?" called they.

"Off to the palace to fight the King," cried Blackbird.

"He has caged my wife. I am going to set her free.

The cat and the ants are going to help me."

"Wait for us," cried the rope and the club.

"Then hurry and jump into my ear," said Blackbird.

In jumped the rope and the club, and on ran Blackbird, crying "War, war, war!"


Near the King's palace was a river, and as Blackbird was crossing, he heard it say,

"Where are you going so fast, Mr. Blackbird?"

"To the palace to fight the King.

He has my wife caged

and hung in his parlor.

I am going to set her free."

"Then make yourself small and pour into my ear," said Blackbird.

The large river made itself into a little stream and poured into Blackbird's ear.


Then Blackbird marched to the palace. 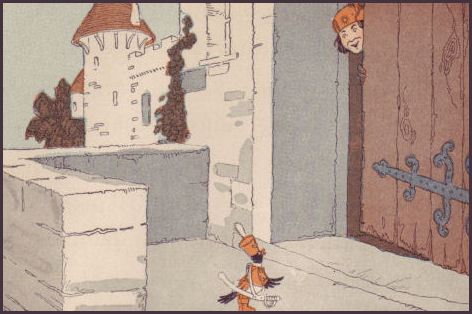 "Who's there?" called the door-keeper.

"It is I, General Blackbird. I've come to find my wife!"

"Then I will fight!" cried Blackbird; and he beat his drum loud and long.


Just then the King looked out of the window above.

"What do you want?" said the King.

"I want my wife," said Blackbird.

"You shan't have her!" said the King.

"Then we will fight," said Blackbird.

Now this made the King angry.

He called to his men,

and put him in the hen-house.

Let the hens peck him to death."

So the men locked Blackbird in the hen-house.


But when the hens were asleep, Mr. Blackbird sang:

"Come out, Pussy, from my ear,

There are hens in plenty here.

Scratch them, make their feathers fly,

Twist their necks until they die."

So out came pussy.

And then how the feathers flew!

She scratched every hen as dead as a stone.


In the morning the King said:

When the men went to the hen-house, there sat Blackbird singing sweetly.

And all about him lay the dead hens.


Of course the King was very angry.

"Put this fellow with the wild horses to-night," said he.

"They will soon kill him."

So at night Blackbird was shut in the stable.


But when all was still, he whispered:

"Come out, Rope, and come out, Stick,

Tie the horses, tie them quick;

Beat the horses on the head,

Beat them till they fall down dead."

Then the rope and the club came out.

The rope tied the horses, and the club beat them until every horse was killed.

He sat high on his throne and said, "Ho, men! Get me the pieces of Mr. Blackbird."

So off ran the men to the stable.

But out in the stable Blackbird was singing merrily.

And all the wild horses were as dead as stones.


You may guess how angry the King was!

"All right," said he. "Tie this fellow with the elephants to-night. They will soon finish him."

So at night Blackbird was tied with the elephants. 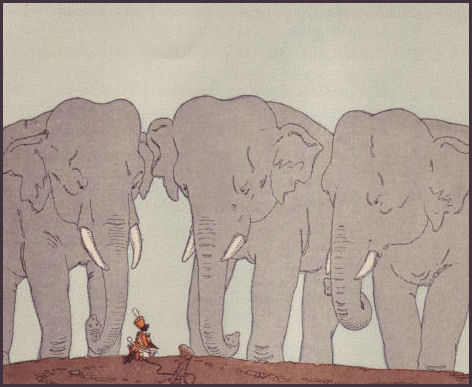 But when all was still, he whispered:

"Come out from my ear, you Ants,

Come and sting the elephants;

Sting each trunk, and sting each head,

Sting them till they fall down dead."

Then the ants came hurrying out.

They bit and stung the elephants until every one was dead.


In the morning the King said again, "Ho, there, bring in the pieces of Mr. Blackbird."

And all the elephants were dead.


Then the King was wild with rage.

"To-night I will have this bad bird in my own room," said he.

So they put Blackbird in the King's room, and they thought he would surely die of fear before morning.

But in the middle of the night the King heard Blackbird say:

"Come out, River, from my ear,

Flow about the bedroom here;

Pour yourself upon the bed,

Drown the King till he is dead."

At once the river came pour, pour, pouring from Blackbird's ear.

It almost filled the room, and the King began to get wet.

So Blackbird got his wife from the cage in the parlor.


Then he and she and the cat and the ants and the club and the rope and the river all went home.

And the King never troubled them any more. 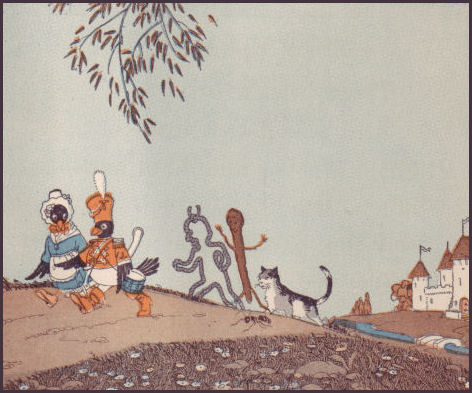