Once upon a time there was a timid hare.

All hares are timid; but this one was more timid than all the others.

She always thought some terrible thing was going to happen.


She thought the earth might burn up, or fall to pieces, and she would say,

"If the earth were to fall in, what should I do?"

At last she began to believe that this was going to happen.


One day when she was alone she heard a little noise.

It was only a heavy nut falling.

But she became much frightened.

She was frightened almost to death.

She began to run as fast as she could.


By and by she met another hare, and said,

"The earth is falling in!"

"Where?" said the other hare.

And off she ran.

Then the other hare also became so frightened that he began to run.

He told the story to his brother.

That brother told the story to all the family.

They told it to other hares.

At last all the hares in the forest were frightened and running about.

All of them were saying, "The earth is falling in!"

Now the bigger animals heard it, and began to be afraid.

The sheep told one another.

The elephants told one another.

The tigers also told one another.

They ran about saying,

to everyone who passed,

"The earth is falling in!"


But the lion said,

He asked the elephant,

He asked the tiger,

He asked the sheep,

"One of my brothers," said the hare.

"All the family know it."


By and by the lion found the little hare that began it all.

The lion said, "Why did you say the earth is falling in?"

"Come and show me," said the lion.

Now the little hare was afraid to go.

But she was more afraid of the lion.

"But I see nothing," said the lion.

This big nut made the noise.

The earth is not  falling in.

Now go and tell every other animal."

So the little hare went, and called out,

"The earth is not  falling in!"

One by one all the other animals called to one another,

"The earth is not falling in."

And the little hare was so tired that she lay down and slept for twelve hours. 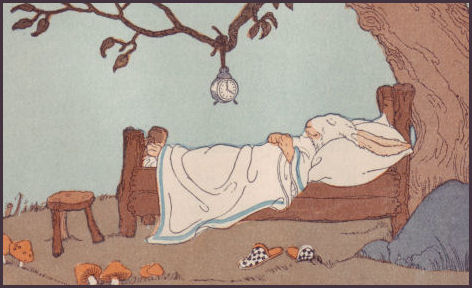