LL the places that the Argonauts came nigh to and went past need not be told—Melibœa, where they escaped a stormy beach; Homole, from where they were able to look on Ossa and holy Olympus; Lemnos, the island that they were to return to; the unnamed country where the Earth-born Men abide, each having six arms, two growing from his shoulders, and four fitting close to his terrible sides; and then the Mountain of the Bears, where they climbed, to make sacrifice there to Rhea, the mighty mother of the gods.

Afterward, for a whole day, no wind blew and the sail of the Argo  hung slack. But the heroes swore to each other that they would make their ship go as swiftly as if the storm-footed steeds of Poseidon were racing to overtake her. Mightily they labored at the oars, and no one would be first to leave his rower's bench.

And then, just as the breeze of the evening came up, and just as the rest of the heroes were leaning back, spent with their labor, the oar that Heracles still pulled at broke, and half of it was carried away by the waves. Heracles sat there in ill humor, for he did not know what to do with his unlaboring hands.

All through the night they went on with a good breeze filling their sails, and next day they came to the mouth of the River Cius. There they landed so that Heracles might get himself an oar. No sooner did they set their feet upon the shore than the hero went off into the forest, to pull up a tree that he might shape into an oar.

Where they had landed was near to the country of the Bebrycians, a rude people whose king was named Amycus. Now while Heracles was away from them this king came with his followers—huge, rude men, all armed with clubs, down to where the Argonauts were lighting their fires on the beach.

He did not greet them courteously, asking them what manner of men they were and whither they were bound, nor did he offer them hospitality. Instead, he shouted at them insolently:

"Listen to something that you rovers had better know. I am Amycus, and any stranger that comes to this land has to get into a boxing bout with me. That's the law that I have laid down. Unless you have one amongst you who can stand up to me you won't be let go back to your ship. If you don't heed my law, look out, for something's going to happen to you."

So he shouted, that insolent king, and his followers raised their clubs and growled approval of what their master said. But the Argonauts were not dismayed at the words of Amycus. One of them stepped toward the Bebrycians. He was Polydeuces, good at boxing.

"Offer us no violence, king," said Polydeuces. "We are ready to obey the law that you have laid down. Willingly do I take up your challenge, and I will box a bout with you."

The Argonauts cheered when they saw Polydeuces, the good boxer, step forward, and when they heard what he had to say. Amycus turned and shouted to his followers, and one of them brought up two pairs of boxing gauntlets—of rough cowhide they were. The Argonauts feared that Polydeuces' hands might have been made numb with pulling at the oar, and some of them went to him, and took his hands and rubbed them to make them supple; others took from off his shoulders his beautifully colored mantle.

Amycus straightway put on his gauntlets and threw off his mantle; he stood there amongst his followers with his great arms crossed, glowering at the Argonauts as a wild beast might glower. And when the two faced each other Amycus seemed like one of the Earth-born Men, dark and hugely shaped, while Helen's brother stood there light and beautiful. Polydeuces was like that star whose beams are lovely at evening-tide.

Like the wave that breaks over a ship and gives the sailors no respite Amycus came on at Polydeuces. He pushed in upon him, thinking to bear him down and overwhelm him. But as the skillful steersman keeps the ship from being overwhelmed by the monstrous wave, so Polydeuces, all skill and lightness, baffled the rushes of Amycus. At last Amycus, standing on the tips of his toes and rising high above him, tried to bring down his great fist upon the head of Polydeuces. The hero swung aside and took the blow on his shoulder. Then he struck his blow. It was a strong one, and under it the king of the Bebrycians staggered and fell down. "You see," said Polydeuces, "that we keep your law."

The Argonauts shouted, but the rude Bebrycians raised their clubs to rush upon them. Then would the heroes have been hard pressed, and forced, perhaps, to get back to the Argo.  But suddenly Heracles appeared amongst them, coming up from the forest.

He carried a pine tree in his hands with all its branches still upon it, and seeing this mighty-statured man appear with the great tree in his hands, the Bebrycians hurried off, carrying their fallen king with them. Then the Argonauts gathered around Polydeuces, saluted him as their champion, and put a crown of victory upon his head. Heracles, meanwhile, lopped off the branches of the pine tree and began to fashion it into an oar.

The fires were lighted upon the shore, and the thoughts of all were turned to supper. Then young Hylas, who used to sit by Heracles and keep bright the hero's arms and armor, took a bronze vessel and went to fetch water.

Never was there a boy so beautiful as young Hylas. He had golden curls that tumbled over his brow. He had deep blue eyes and a face that smiled at every glance that was given him, at every word that was said to him. Now as he walked through the flowering grasses, with his knees bare, and with the bright vessel swinging in his hand, he looked most lovely. Heracles had brought the boy with him from the country of the Dryopians; he would have him sit beside him on the bench of the Argo,  and the ill humors that often came upon him would go at the words and the smile of Hylas.

Now the spring that Hylas was going toward was called Pegae, and it was haunted by the nymphs. They were dancing around it when they heard Hylas singing. They stole softly off to watch him. Hidden behind trees the nymphs saw the boy come near, and they felt such love for him that they thought they could never let him go from their sight.

They stole back to their spring, and they sank down below its clear surface. Then came Hylas singing a song that he had heard from his mother. He bent down to the spring, and the brimming water flowed into the sounding bronze of the pitcher. Then hands came out of the water. One of the nymphs caught Hylas by the elbow; another put her arms around his neck, another took the hand that held the vessel of bronze. The pitcher sank down to the depths of the spring. The hands of the nymphs clasped Hylas tighter, tighter; the water bubbled around him as they drew him down. Down, down they drew him, and into the cold and glimmering cave where they live. 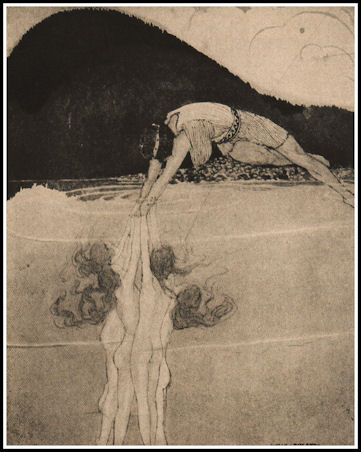 There Hylas stayed. But although the nymphs kissed him and sang to him, and showed him lovely things, Hylas was not content to be there.

Where the Argonauts were the fires burned, the moon arose, and still Hylas did not return. Then they began to fear lest a wild beast had destroyed the boy. One went to Heracles and told him that young Hylas had not come back, and that they were fearful for him. Heracles flung down the pine tree that he was fashioning into an oar, and he dashed along the way that Hylas had gone as if a gadfly were stinging him. "Hylas, Hylas," he cried. But Hylas, in the cold and glimmering cave that the nymphs had drawn him into, did not hear the call of his friend Heracles.

All the Argonauts went searching, calling as they went through the island, "Hylas, Hylas, Hylas!" But only their own calls came back to them. The morning star came up, and Tiphys, the steersman, called to them from the Argo.  And when they came to the ship Tiphys told them that they would have to go aboard and make ready to sail from that place.

They called to Heracles, and Heracles at last came down to the ship. They spoke to him, saying that they would have to sail away. Heracles would not go on board. "I will not leave this island," he said, "until I find young Hylas or learn what has happened to him."

Then Jason arose to give the command to depart. But before the words were said Telamon stood up and faced him. "Jason," he said angrily, "you do not bid Heracles come on board, and you would have the Argo  leave without him. You would leave Heracles here so that he may not be with us on the quest where his glory might overshadow your glory, Jason."

Jason said no word, but he sat back on his bench with head bowed. And then, even as Telamon said these angry words, a strange figure rose up out of the waves of the sea.

It was the figure of a man, wrinkled and old, with seaweed in his beard and his hair. There was a majesty about him, and the Argonauts all knew that this was one of the immortals—he was Nereus, the ancient one of the sea.

"To Heracles, and to you, the rest of the Argonauts, I have a thing to say," said the ancient one, Nereus. "Know, first, that Hylas has been taken by the nymphs who love him and who think to win his love, and that he will stay forever with them in their cold and glimmering cave. For Hylas seek no more. And to you, Heracles, I will say this: Go aboard the Argo  again; the ship will take you to where a great labor awaits you, and which, in accomplishing, you will work out the will of Zeus. You will know what this labor is when a spirit seizes on you." So the ancient one of the sea said, and he sank back beneath the waves.

Heracles went aboard the Argo  once more, and he took his place on the bench, the new oar in his hand. Sad he was to think that young Hylas who used to sit at his knee would never be there again. The breeze filled the sail, the Argonauts pulled at the oars, and in sadness they watched the island where young Hylas had been lost to them recede from their view.