The Tale of Two Bad Mice 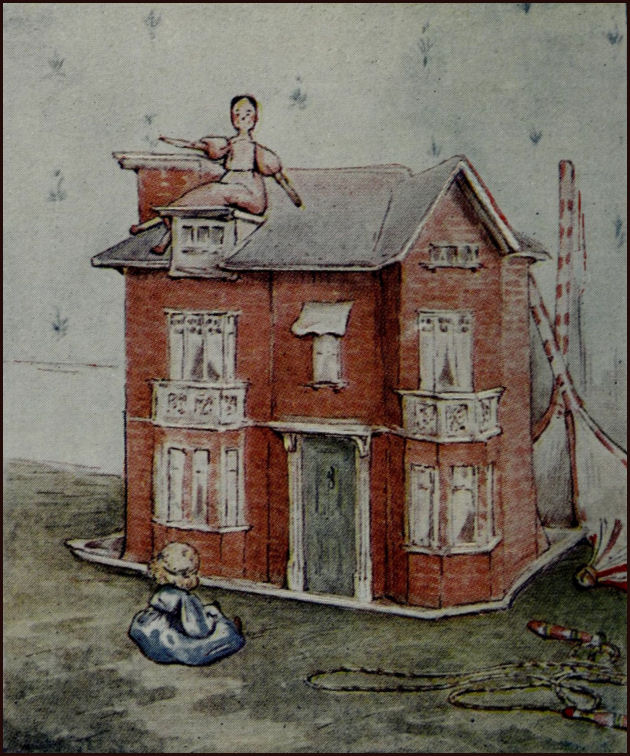 O NCE upon a time there was a very beautiful it was red brick with white windows, and it had real muslin curtains and a front door and a chimney. 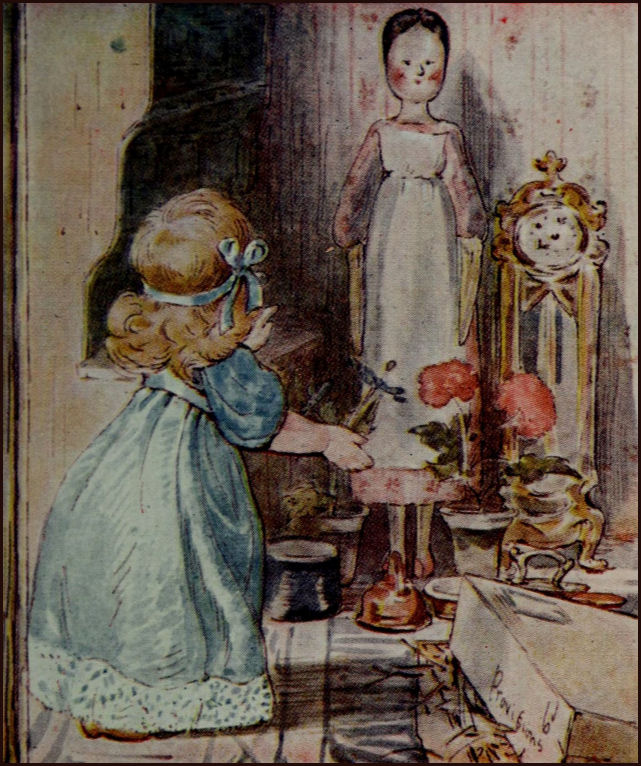 I T belonged to two Dolls called Lucinda and Jane; at least it belonged to Lucinda, but she never ordered meals.

Jane was the Cook; but she never did any cooking, because the dinner had been bought in a box full of shavings. 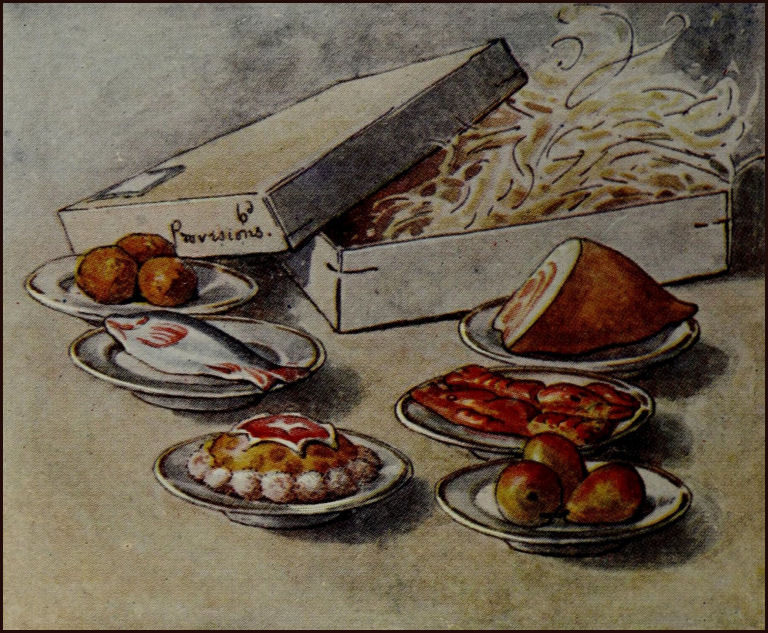 T HERE were two red lobsters and a ham, a fish, a pudding, and some pears and oranges.

They would not come off the plates, but they were extremely beautiful. 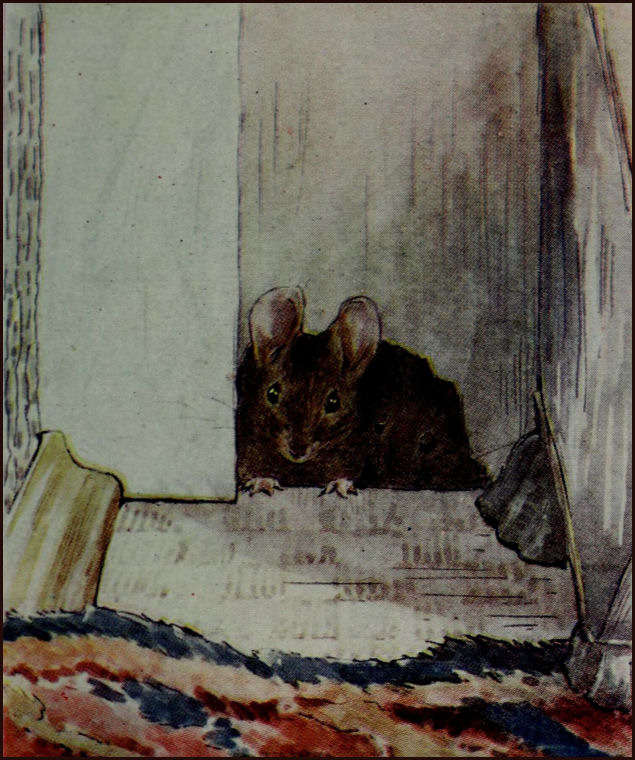 O NE morning Lucinda and Jane had gone out for a drive in the doll's perambulator. There was no one in the nursery, and it was very quiet. Presently there was a little scuffling, scratching noise in a corner near the where there was a hole under the

Tom Thumb put out his head for a moment, and then popped it in again.

Tom Thumb was a mouse. 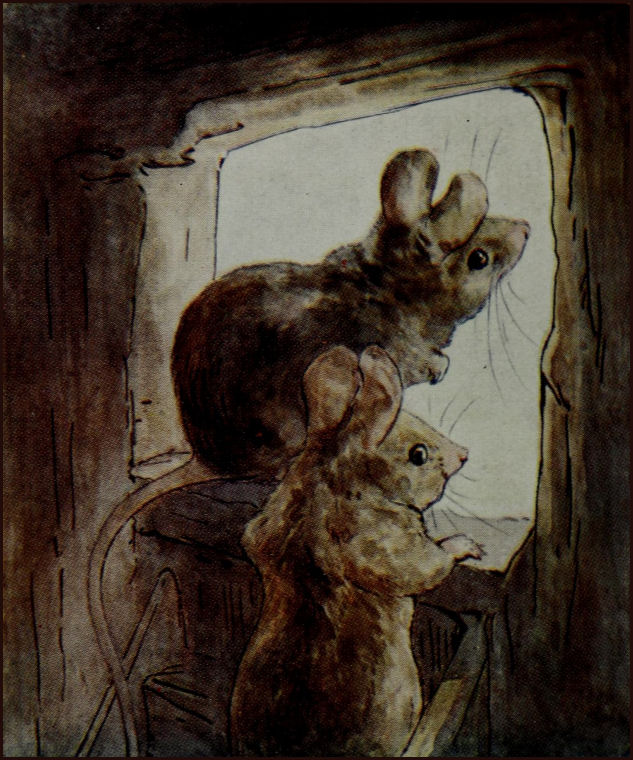 A MINUTE afterwards, Hunca Munca, his wife, put her head out, too; and when she saw that there was no one in the nursery, she ventured out on the oilcloth under the 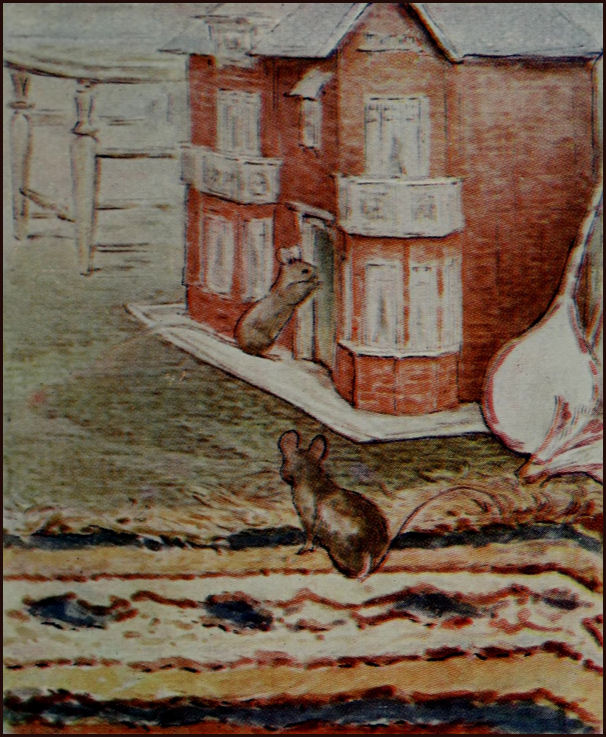 T HE doll's-house stood at the other side of the Tom Thumb and Hunca Munca went cautiously across the They pushed the front door—it was not fast. 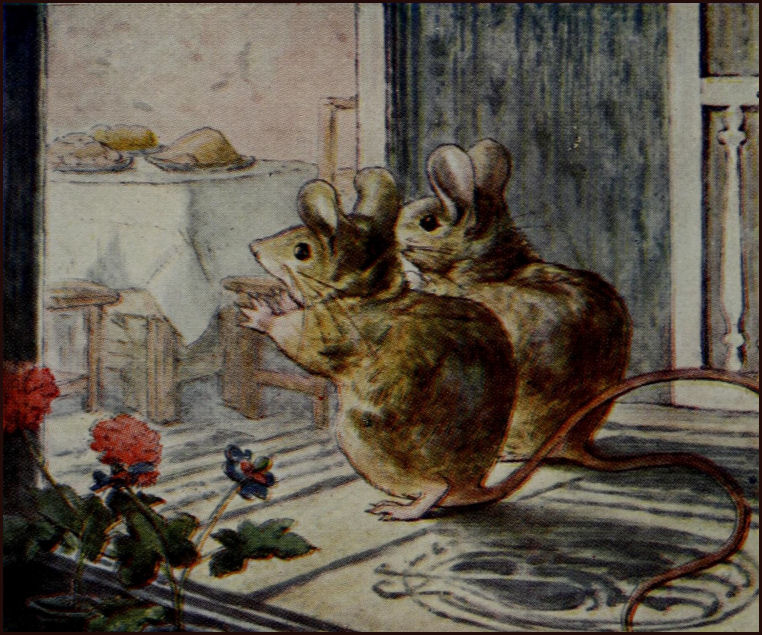 T OM THUMB and Hunca Munca went upstairs and peeped into the Then they squeaked with joy!

Such a lovely dinner was laid out upon the table! There were tin spoons, and lead knives and forks, and two —all so  convenient! 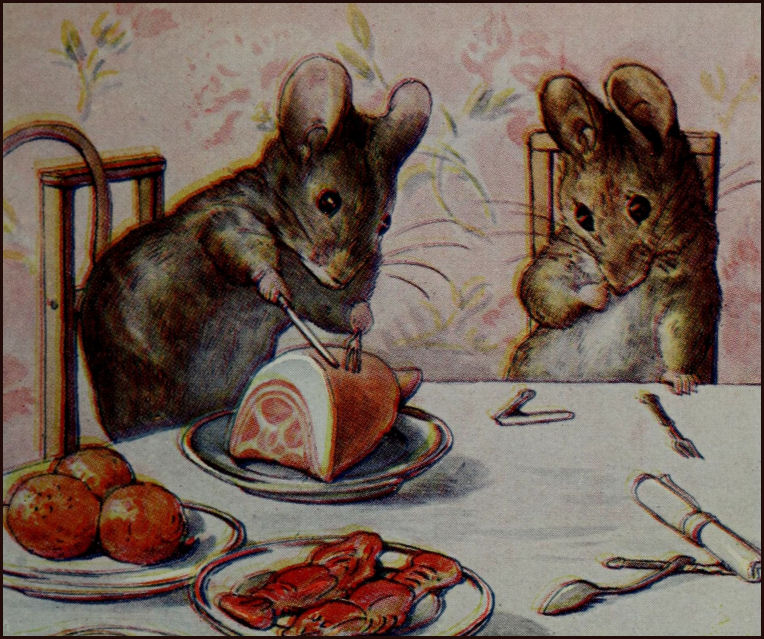 T OM THUMB set to work at once to carve the ham. It was a beautiful shiny yellow, streaked with red.

The knife crumpled up and hurt him; he put his finger in his mouth.

"It is not boiled enough; it is hard. You have a try, Hunca Munca." 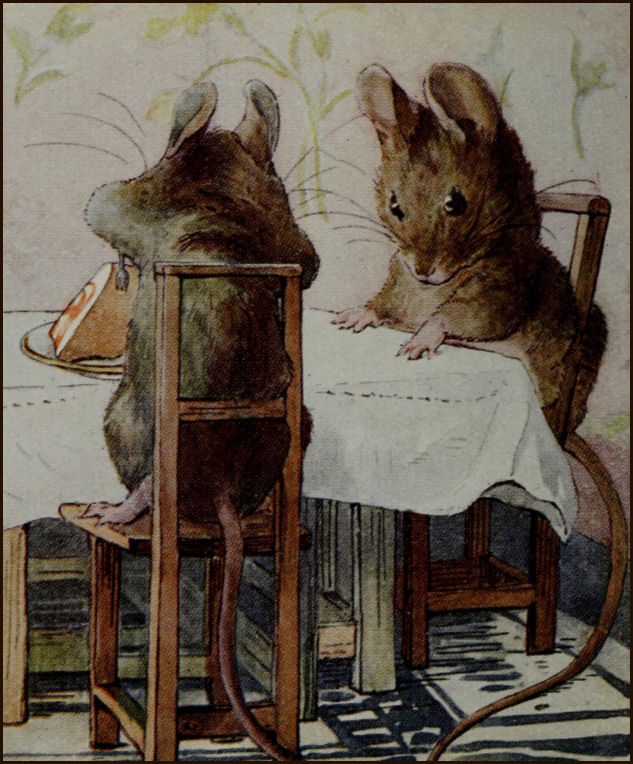 H UNCA MUNCA stood up in her chair, and chopped at the ham with another lead knife.

"It's as hard as the hams at the cheesemonger's," said Hunca Munca. 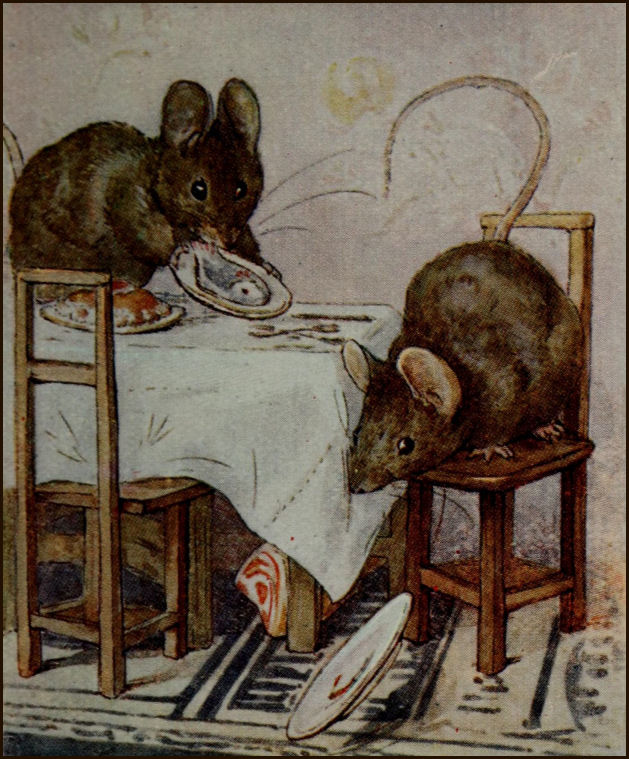 T HE ham broke off the plate with a jerk, and rolled under the table.

"Let it alone," said Tom Thumb; "give me some fish, Hunca Munca!" 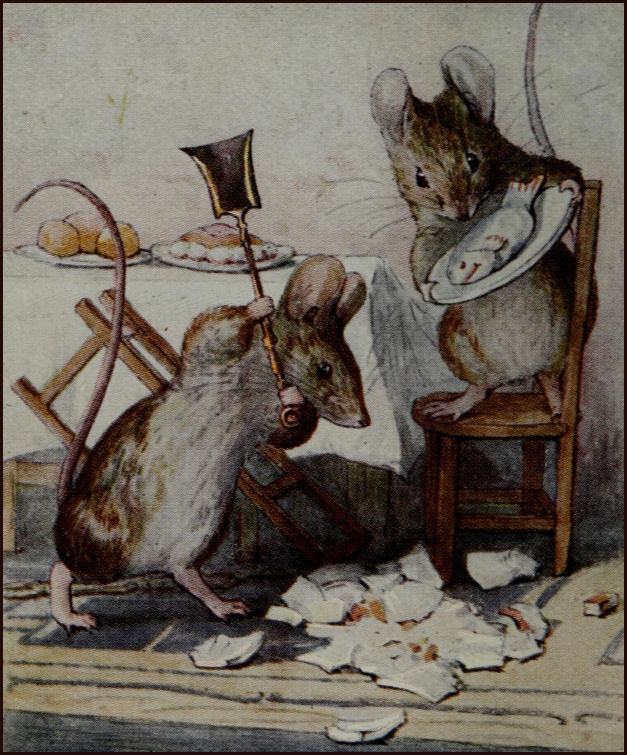 H UNCA MUNCA tried every tin spoon in turn; the fish was glued to the dish.

Then Tom Thumb lost his temper. He put the ham in the middle of the floor, and hit it with the tongs and with the shovel—bang, bang, smash, smash!

The ham flew all into pieces, for underneath the shiny paint it was made of nothing but plaster! 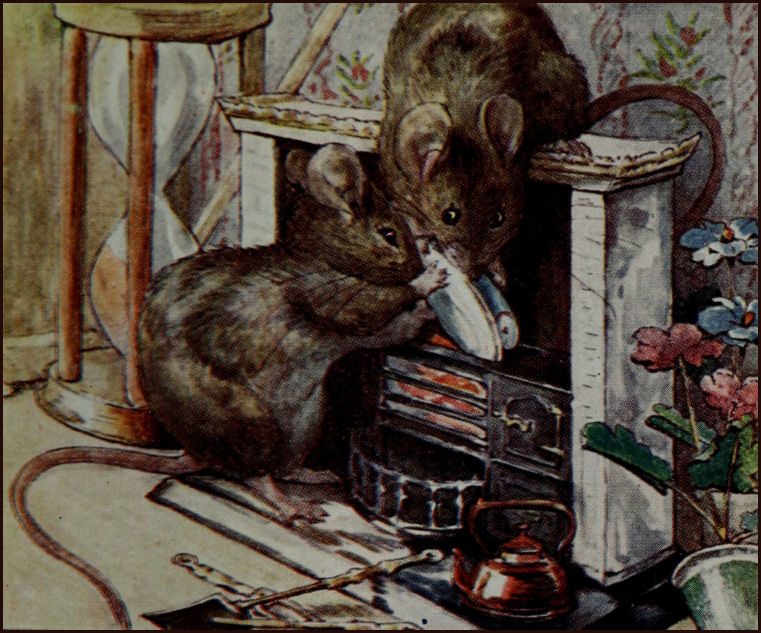 T HEN there was no end to the rage and disappointment of Tom Thumb and Hunca Munca. They broke up the pudding, the lobsters, the pears and the oranges.

As the fish would not come off the plate, they put it into the crinkly paper fire in the kitchen; but it would not burn either. 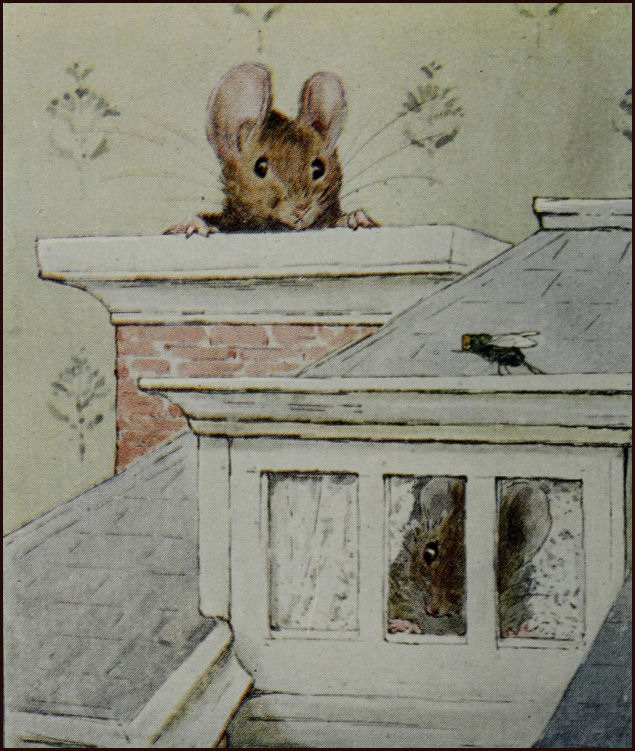 T OM THUMB went up the kitchen chimney and looked out at the top—there was no soot. 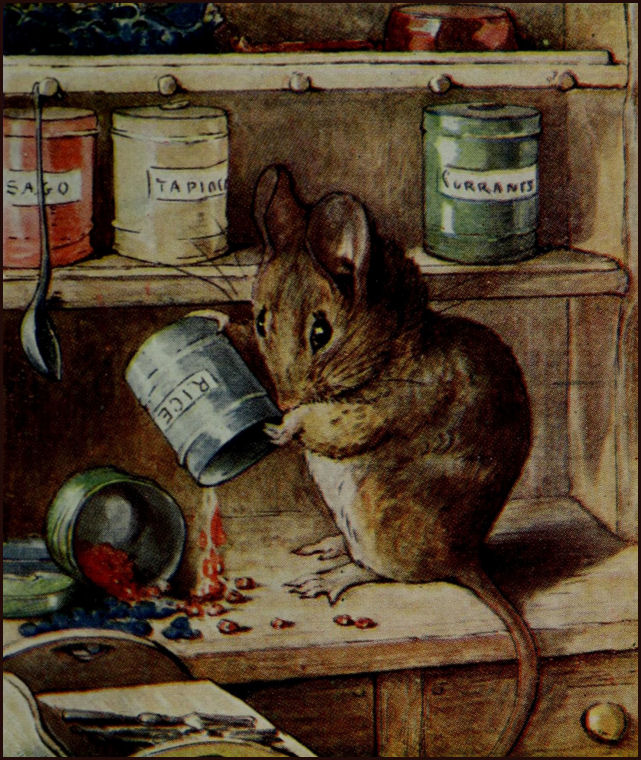 W HILE Tom Thumb was up the chimney, Hunca Munca had another disappointment. She found some tiny canisters upon the dresser, labelled—Rice—Coffee—Sago—but when she turned them upside down, there was nothing inside except red and blue beads. 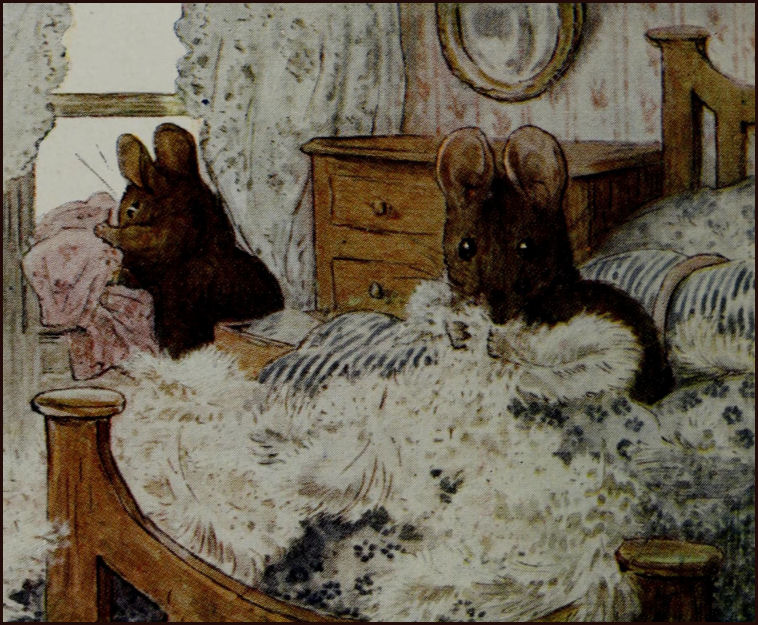 T HEN those mice set to work to do all the mischief they could—especially Tom Thumb! He took Jane's clothes out of the chest of drawers in her bedroom, and he threw them out of the top floor window.

But Hunca Munca had a frugal mind. After pulling half the feathers out of Lucinda's bolster, she remembered that she herself was in want of a feather bed. 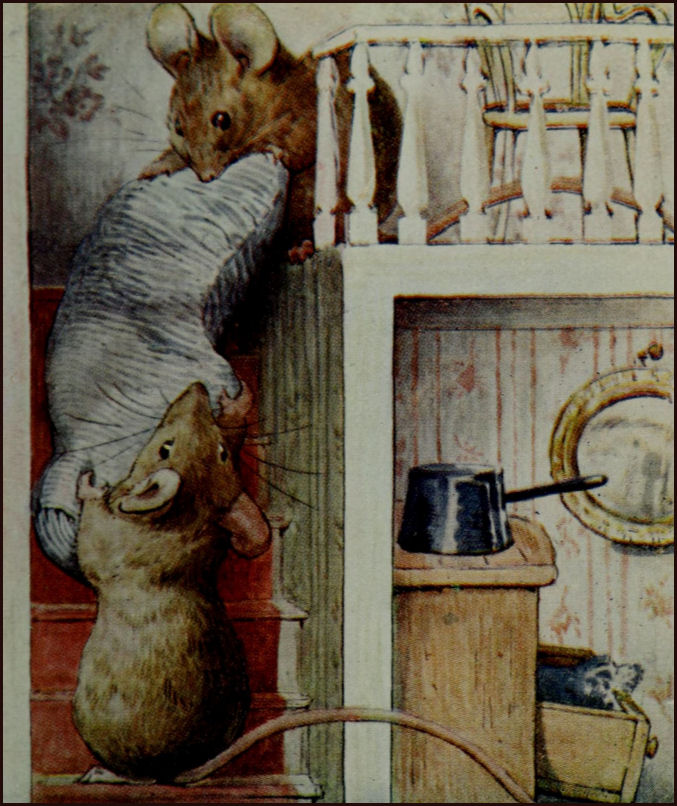 W ITH Tom Thumb's assistance she carried the bolster downstairs, and across the It was difficult to squeeze the bolster into the but they managed it somehow. 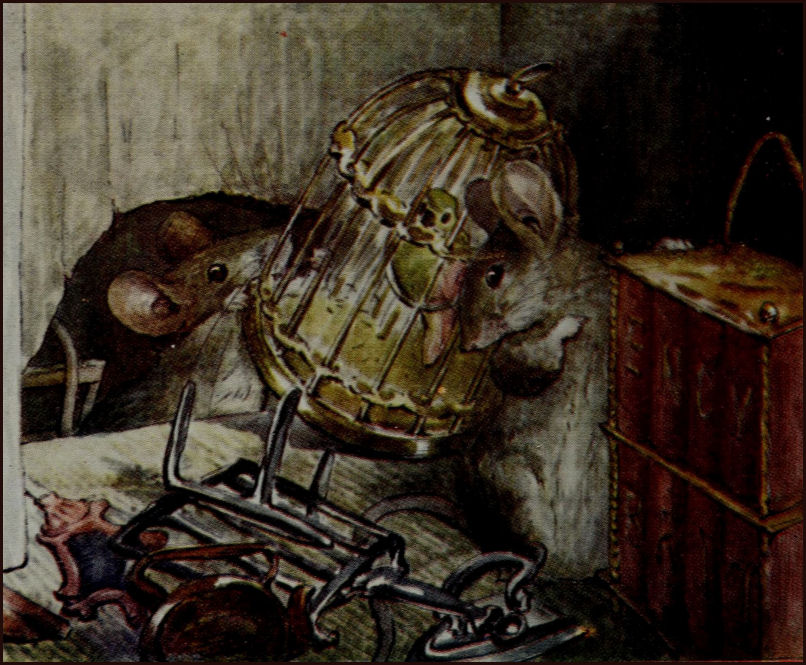 T HEN Hunca Munca went back and fetched a chair, a a and several small odds and ends. The and the refused to go into the 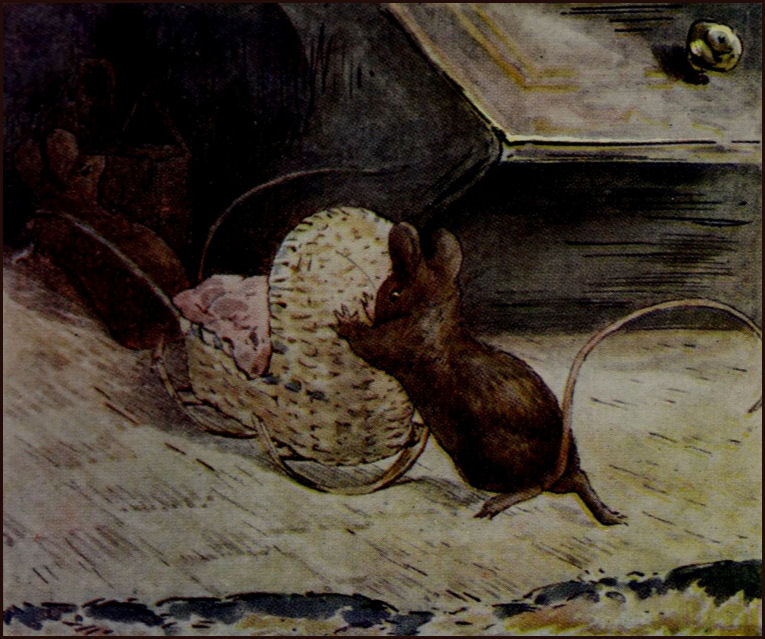 H UNCA MUNCA left them behind the coal-box, and went to fetch a cradle. 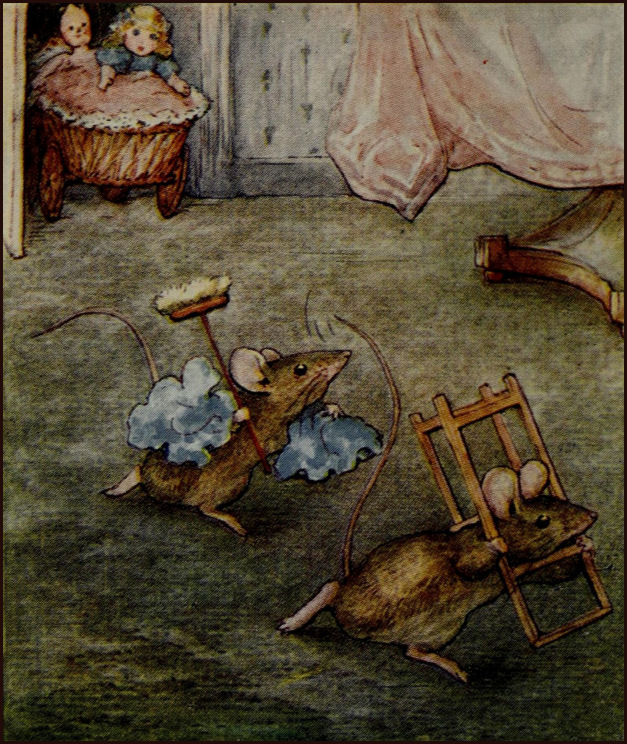 H UNCA MUNCA was just returning with another chair, when suddenly there was a noise of talking outside upon the landing. The mice rushed back to their hole, and the dolls came into the nursery. 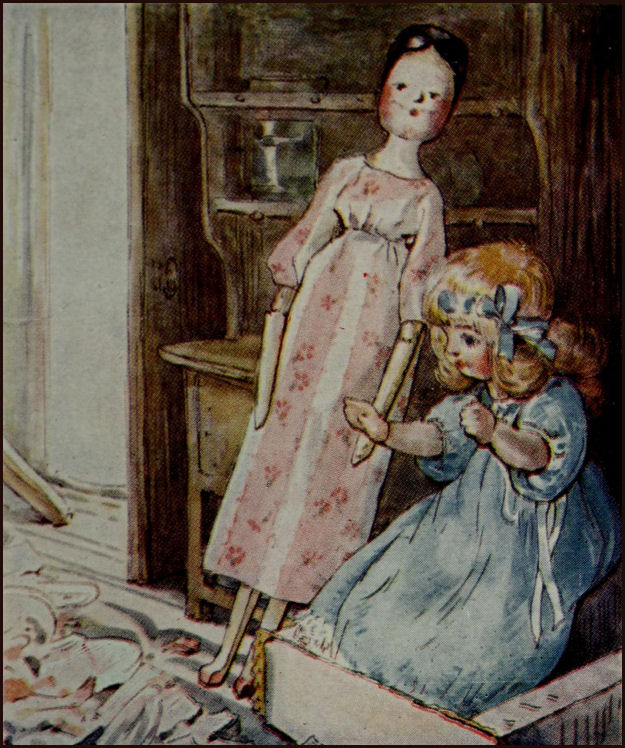 W HAT a sight met the eyes of Jane and Lucinda!

Lucinda sat upon the upset kitchen stove and stared; and Jane leant against the kitchen dresser and smiled—but neither of them made any remark. 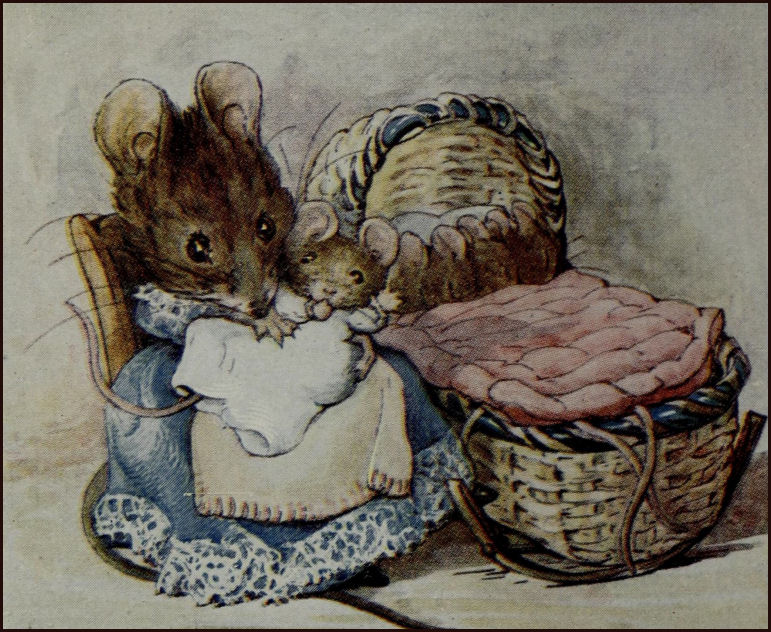 T HE book-case and the bird-cage were rescued from under the —but Hunca Munca has got the cradle, and some of Lucinda's clothes. 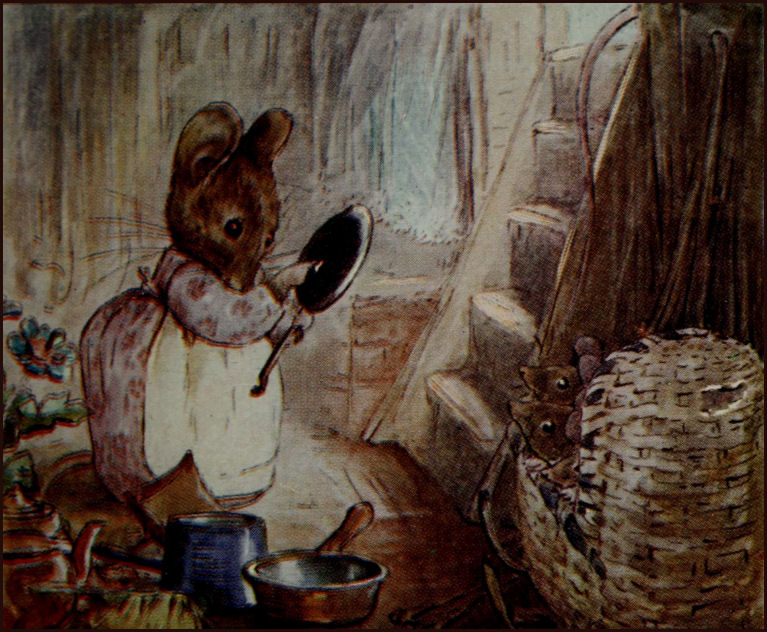 S HE also has some useful pots and pans, and several other things. 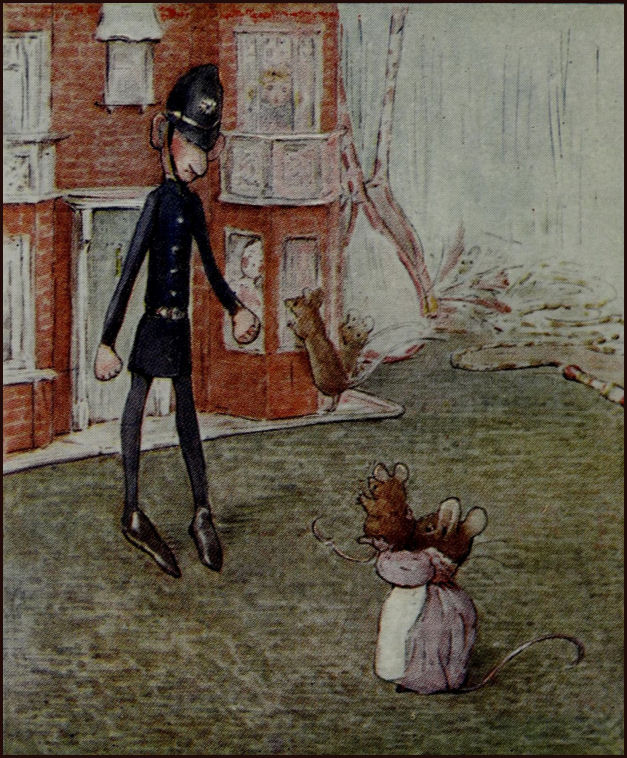 T HE little girl that the doll's-house belonged to, said,—"I will get a doll dressed like a policeman!" 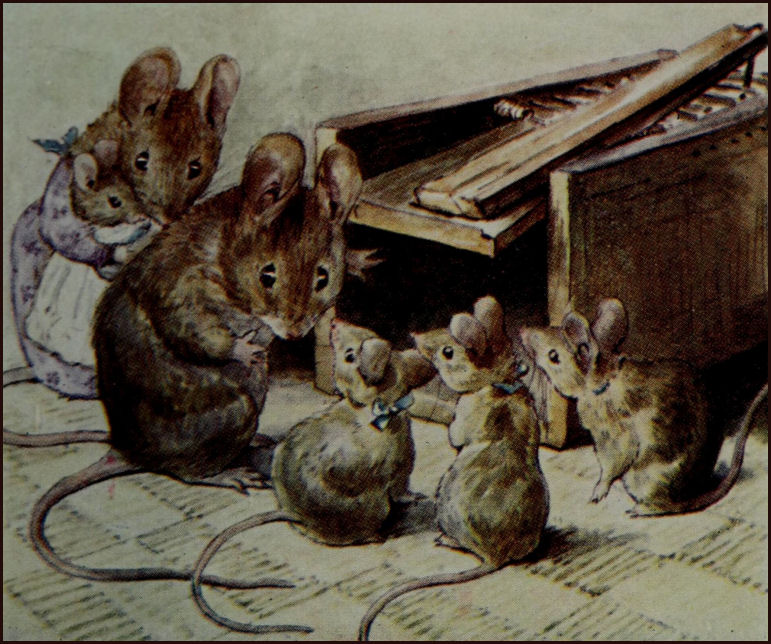 B UT the nurse said,—"I will set a 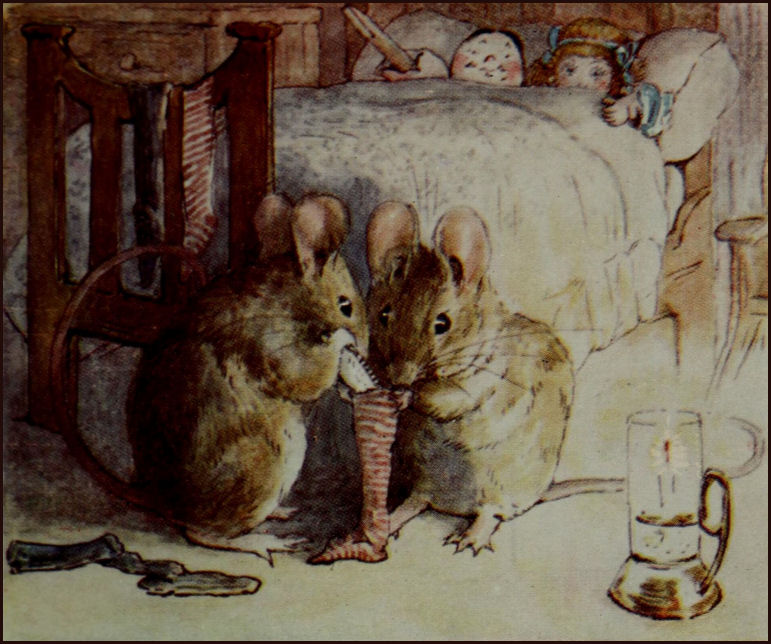 S O that is the story of the two Bad Mice,—but they were not so very very naughty after all, because Tom Thumb paid for everything he broke.

He found a crooked sixpence under the and upon Christmas Eve, he and Hunca Munca stuffed it into one of the stockings of Lucinda and Jane. 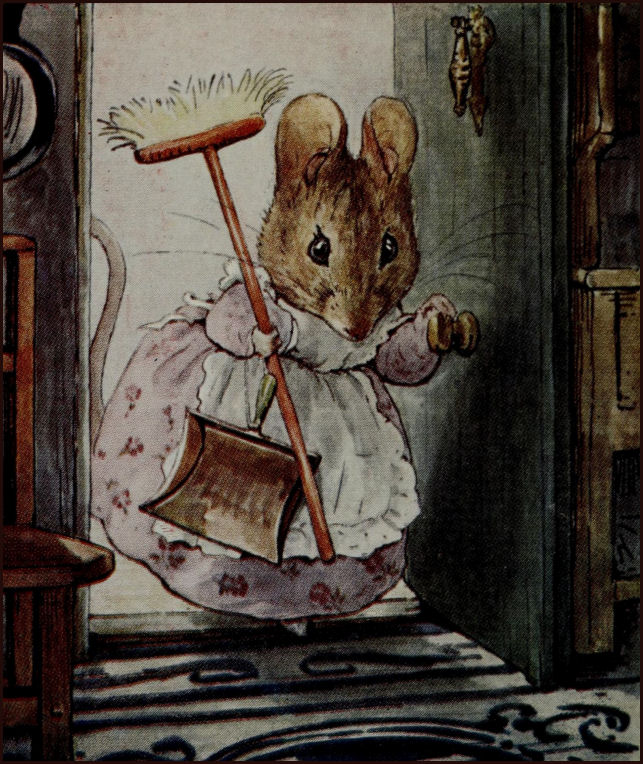 A ND very early every morning—before anybody is awake—Munca comes with her and her broom to sweep the Dollies' house!