C HARLES owned a garden. One morning his father called him and pointing to four stakes driven in the ground which certainly had not been there the night before, said:

"All the land within those four stakes is yours, your very own."

Charles was delighted, and thanking his dear father, ran off to get his little cart, for he wished at once to build a stone wall about his property. He did not fear it would run away, but he knew that land-owners always walled in their possessions.

"After the wall is built," said his father, "you may plant in your garden anything you like, and James will give you what you ask for."

In two days the wall was built, and a good one it was too, being strong and even.

The next day James set out some plants for him, and gave the boy some seeds which he planted himself, James telling him how to do it.

He then got his watering-pot and gently sprinkled the newly planted ground with warm water. Running across the lawn, he looked down the road to see if his father had not yet come from the village. His father was nowhere to be seen, but coming down the road was a most remarkable looking man. He was tall and thin and had bright red hair which had evidently not been cut for a very long time. He wore a blue coat, green trousers, red hat, and on his hands, which were large, two very dirty, ragged, white kid gloves.

This wonderful man came up to Charles and asked for a drink of water, which he, being a polite boy, at once brought. The man thanked him, and then said:

"What have you been doing this morning, little man?"

Charles told him about his new garden, and the man listened with much interest. 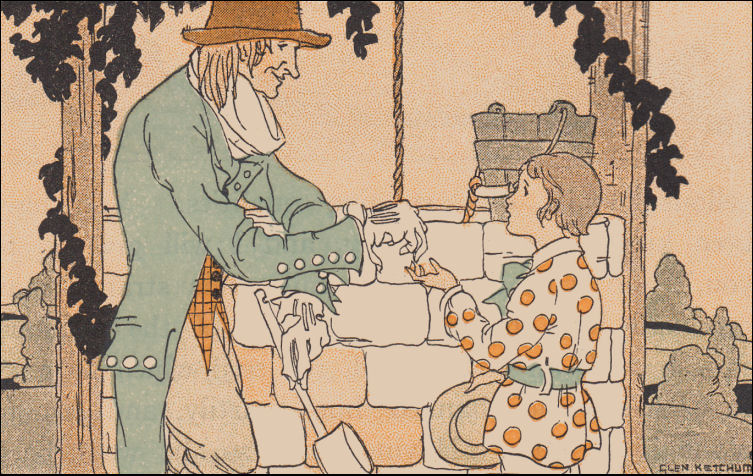 "Little boy," said he, "there is one seed that you have not got."

"The seed of the quick-running squash."

"I don't believe James has that, and I don't know where to get one," he faltered.

"Now , as it happens," said the man, "I have one of those very seeds in my pocket. It is not, however, that of the common, everyday quick-running squash. This one came from India, and is marvellous for its quick-running qualities. You have been kind to me, little boy, and I will give it to you," and with a peculiar smile, this strange man produced from his pocket, instead of the ordinary squash seed, an odd, round, red seed which he gave to Charles, who thanked him heartily, and ran to plant it at once. Having done so, he went back to ask when the quick-running squash would begin to grow. But the man had disappeared, and, although Charles looked up and down the dusty road, he could see nothing of him.

As he stood there, he heard behind him a little rustling noise, and turning, saw coming toward him a green vine. He had, of course, seen vines before, but never, never had he seen such a queer one as this. It was running swiftly toward him, and on the very front was a round yellow ball, about as big as an orange! Charles, looking back to see where it came from, found that it started in the corner of his garden. And what had he planted in that corner? Why, to be sure, the seed of the quick-running squash, which the strange man had just given him.

"Well, well, well!" he shouted, in great excitement, "what an awfully quick-running squash it is. I suppose that little yellow thing in front is the squash itself. But indeed it must not run away from me, I must stop it." And he started swiftly down the street after it.

But, alas, no boy could run as fast as that squash, and Charles saw far ahead the bright yellow ball, now grown to be about the size of an ordinary squash, running and capering merrily over stones big and little, never turning out for anything, but bobbing up and down, up and down, and waving its long green vine like a tail behind it. The boy ran swiftly on. "It shall not get away," he panted. "It belongs to me."

But that the squash did not seem to realize at all. He did not feel that he belonged to anybody, and he did feel that he was a quick-running squash, and so on he scampered.

Suddenly he came to a very large rock, and stopped for a moment to take breath, and in that moment Charles caught up with him, and simply sat down on him.

"Now, squash," said he, slapping him on the side, "your journey is ended."

The words were scarcely spoken when he suddenly felt himself lifted up in the air, and bumpity, bump, over the stone flew the squash, carrying with him his very much astonished little master! The squash had been growing all the time, and was now about three times as big as an ordinary one. Charles, who had a pony of his own, knew how to ride, but never had he ridden anything so extraordinary as this. On they flew, roll, waddle, bump, bump, roll, waddle, bang, the boy digging his knees hard into the sides of the squash to avoid being thrown. He had a dreadfully hard time. Mount the next quick-running squash you meet, and you will see for yourself how it is.

To Charles's great delight, he now saw his father coming toward him, riding his big white horse Nero, who was very much frightened when he saw the boy on such a strange yellow steed. But Nero soon calmed down at his master's voice, and turning, rode along beside the big squash, although he had to go at full speed to do so. "Gallopty-gallop" went Nero and "bumpity-bump" went the squash. Papa lost his hat (Charles had parted with his long before).

"What are you doing, my son, and what, what is it you are riding?" asked his father.

"A quick-running squash, Papa," gasped Charles, who, although bruised, refused to give up the squash, and was still pluckily keeping his seat. "Stop it, oh, do stop it, Papa."

His father knew that this could be no ordinary squash, and saw that it evidently did not intend to stop.

"I will try to turn it and make it go back," he said; so riding Nero nearer and nearer the squash, he forced it up against a stone wall. But, instead of going back, this extraordinary squash jumped with scarcely a moment's hesitation over the high wall, and went bobbing along into the rough field beyond. But alas, before them was a broad lake, and as he could not swim, back he was forced to turn. Over the wall and back again over the same road and toward the garden whence he came, Charles still on his back and Charles's papa galloping at full speed behind.

The squash, however, must have had a good heart, for when he reached the house again, he of his own accord turned in at the gate and ran up to the wall of Charles's garden. There he stopped, for he was now so big that he could not climb walls, and indeed, had he been able to get in, he would have filled the little garden to overflowing, for he was really enormous. Charles's father had actually to get a ladder for the poor little fellow to climb down, and he was so tired that he had to be carried to the house. But the squash was tired, too, dreadfully tired. I suppose it is a very bad thing for a growing squash to take much exercise. This certainly was a growing squash, and there is also no doubt that he had taken a great deal of exercise that morning. Be that as it may, when the family were at luncheon, they were alarmed by hearing a violent explosion near the house. Rushing out to see what could have happened, they found that the marvellous quick-running squash had burst! It lay spread all over the lawn in a thousand pieces.

The family, and all the neighbors' families for miles around, had squash pie for a week.